Ratings by Season. Original Simpsons on Tracey Ullman Show. Interview Behind The Writing. Family Matters The David Silverman Interview How does one minute become 15 years? 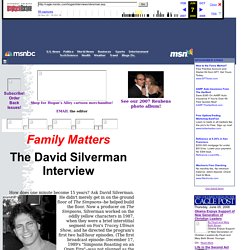 Ask David Silverman. He didn't merely get in on the ground floor of The Simpsons--he helped build the floor. Now a producer on The Simpsons, Silverman worked on the oddly yellow characters in 1987, when they were a brief interstitial segment on Fox's Tracey Ullman Show, and he directed the program's first two half-hour episodes. Tom Heintjes: How do you explain the fact that both The Simpsons and Abba are both wildly popular in Australia? David Silverman: I can't explain that. Heintjes: In 1982, when you graduated from UCLA, the animation industry was not in great shape. Silverman: My intention was to kill myself [laughter]. Heintjes: Had you always been interested in animation? Silverman: I decided at a really young age I wanted to be a cartoonist.

Heintjes: Did you study animation in school? Kodak was sponsoring the Kodak Teenage Movie Awards, and Eric and I had both entered and won. Silverman: No. Simpsonsmania Kicks Off. By N. 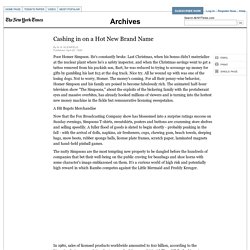 R. KLEINFIELDPublished: April 29, 1990 Poor Homer Simpson. He's constantly broke. Last Christmas, when his bonus didn't materialize at the nuclear plant where he's a safety inspector, and when the Christmas savings went to get a tattoo removed from his puckish son, Bart, he was reduced to trying to scrounge up money for gifts by gambling his last $13 at the dog track. A Hit Begets Merchandise Now that the Fox Broadcasting Company show has blossomed into a surprise ratings success on Sunday evenings, Simpsons T-shirts, sweatshirts, posters and buttons are cramming store shelves and selling speedily. The nutty Simpsons are the most tempting new property to be dangled before the hundreds of companies that bet their well-being on the public craving for beanbags and shoe horns with some character's image emblazoned on them.

In 1980, sales of licensed products worldwide amounted to $10 billion, according to the Licensing Letter, a newsletter. Ullman to Fox: Eat My Shorts! ''I breast-fed those little devils,'' Tracey Ullman once said of the Simpsons. 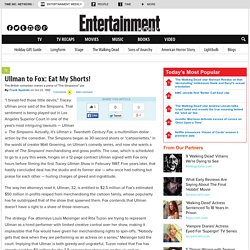 That sentiment is being played out in Los Angeles Superior Court in one of the year's most intriguing lawsuits — Ullman v. The Simpsons. Actually, it's Ullman v. Twentieth Century Fox, a multimillion-dollar action by the comedian. The Simpsons began as 30-second shorts or ''cartoonlettes,'' in the words of creator Matt Groening, on Ullman's comedy series, and now she wants a share of The Simpsons' merchandising and gross profits. The way her attorneys read it, Ullman, 32, is entitled to $2.5 million of Fox's estimated $50 million in profits reaped from merchandising the cartoon family, whose popularity has far outstripped that of the show that spawned them. The strategy: Fox attorneys Louis Meisinger and Rita Tuzon are trying to represent Ullman as a hired performer with limited creative control over her show, making it implausible that Fox would have given her merchandising rights to spin-offs.

Slow Decline in Quality After Season 9. The Simpsons Movie. Matt Groening Reveals the Location of the Real Springfield. 'The Simpsons' Hits a Landmark. Homer Simpson is gunning for you, Matt Dillon. 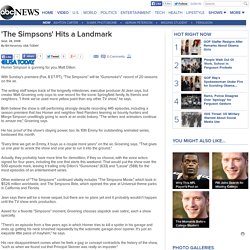 With Sunday's premiere (Fox, 8 ET/PT), "The Simpsons" will tie "Gunsmoke's" record of 20 seasons on the air. The writing staff keeps track of the longevity milestones, executive producer Al Jean says, but creator Matt Groening only cops to one record for the iconic Springfield family, its friends and neighbors. "I think we've used more yellow paint than any other TV show," he says. Both believe the show is still performing strongly despite recording 445 episodes, including a season premiere that has Homer and neighbor Ned Flanders teaming as bounty hunters and Marge Simpson unwittingly going to work at an erotic bakery. "The writers and animators continue to amaze me," Groening says. He has proof of the show's staying power, too: its 10th Emmy for outstanding animated series, bestowed this month. "Every time we get an Emmy, it buys us a couple more years" on the air, Groening says.

"Things turn nasty," Groening says. The Simpsons Ride. ‘The Simpsons’ To Air On FXX In Biggest Off-Network Deal In History. Twenty-four seasons into its run, The Simpsons is finally headed to cable. 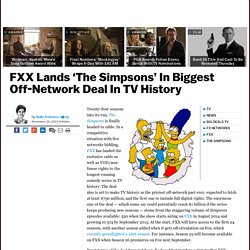 In a competitive situation with five networks bidding, FXX has landed the exclusive cable as well as VOD/non-linear rights to the longest-running comedy series in TV history. The deal also is set to make TV history as the priciest off-network pact ever, expected to fetch at least $750 million, and the first one to include full digital rights. The enormous size of the deal — which some say could potentially reach $1 billion if the series keeps producing new seasons — stems from the staggering volume of Simpsons episodes available: 530 when the show starts airing on FXX in August 2014 and growing to 574 by September 2015.

At the start, FXX will have access to the first 24 seasons, with another season added when it gets off-circulation on Fox, which recently greenlighted a 26th season. For instance, Season 25 will become available on FXX when Season 26 premieres on Fox next September. Simpsons-Family Guy Crossover.