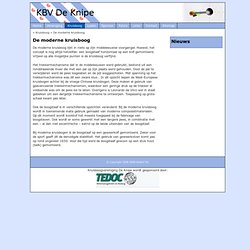 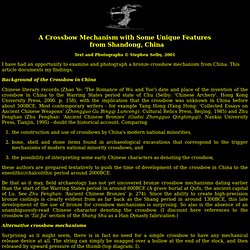 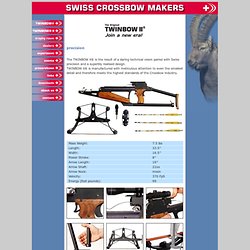 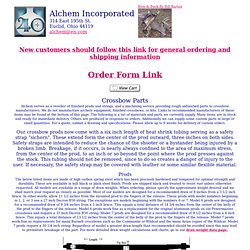 We do not manufacture archery equipment, finished crossbows, or kits. Links to recommended manufacturers of these items may be found at the bottom of this page. The following is a list of materials and parts we currently supply. Many items are in stock and ready for immediate delivery. Others are produced in response to orders. Our crossbow prods now come with a six inch length of heat shrink tubing serving as a safety strap "sichern". Prods The below listed items are made of high carbon spring steel which has been precisely hardened and tempered for optimal strength and durability.

**(These prices include shipping to US addresses. The following PayPal shopping cart buttons include estimated shipping charges. Model 1316: To US To Canada Other Countries Model 1732: To US. Self Cocking Electric Cross Bow. This Is Excalibur - The World's Best Hunting Crossbows. Bow design - Crossbow Building Wiki. When a bow is drawn, it stores energy. 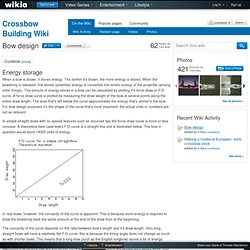 The farther it's drawn, the more energy is stored. When the bowstring is released, this stored (potential) energy is converted into kinetic energy of the projectile (among other things). The amount of energy stored in a bow can be calculated by plotting it's force-draw or F/D curve. A force draw curve is plotted by measuring the draw weight of the bow at several points along the entire draw length. The area that's left below the curve approximates the energy that's stored in the bow. In simple straight bows with no special features such as recurved tips the force-draw curve is more or less concave. Build a Hunter’s Crossbow. Creating my first medieval crossbow.

Post n°6 Re: Creating my first medieval crossbow by Lightly on Thu Jan 14, 2010 5:51 am Dear William, I very much enjoyed your crossbow! 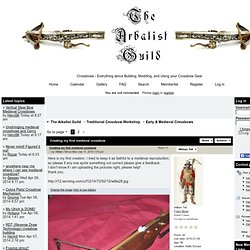 I do love brass work. The bow irons were beautiful, and the inlaid work. I was really intrigued by the leather ends on the prod, (to protect the string?) I also really liked the photos of the bow in your last post, I love bows of this type, and was so pleased to see the detail on these bows, very exciting! One difference between authentic spanish bows of this type, and the ones we are making, is that we make our cheek pieces in two pieces, not one.

Again, thank you for the photos! How to Make Crossbows: The Classic Crossbow. NOTE: Though we did build and test both of our crossbows, the potential for injury from any weapon is enough to compel us to say that whoever decides to make a crossbow does so at his or her own risk. 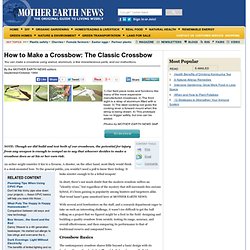 An archer might consider it kin to a firearm. A shooter, on the other hand, most likely would think it a stock-mounted bow. To the general public, you wouldn't need a poll to know their feeling: It looks sinister enough to be a lethal weapon! In short, there's not much doubt that the modern crossbow suffers an "identity crisis," but regardless of the mystery that still surrounds this curious hybrid, it's been gaining in popularity among hunters and targeteers alike.

That trend hasn't gone unnoticed here at MOTHER EARTH NEWS. Crossbow Basics The contemporary crossbow shares little beyond a basic design with its forebear, the medieval arbalest. We chose the path of least resistance and used the simplest common denominators in our design. Making a Homemade Crossbow - part 1. Crossbow. Historically, crossbows played a significant role in the warfare of East Asia, Europe and the Mediterranean. 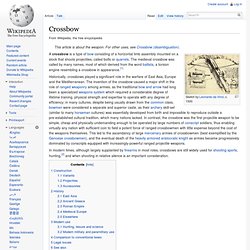 The invention of the crossbow caused a major shift in the role of ranged weaponry among armies, as the traditional bow and arrow had long been a specialized weapons system which required a considerable degree of lifetime training, physical strength and expertise to operate with any degree of efficiency; in many cultures, despite being usually drawn from the common class, bowmen were considered a separate and superior caste, as their archery skill-set (similar to many horseman cultures) was essentially developed from birth and impossible to reproduce outside a pre-established cultural tradition, which many nations lacked.

In modern times, although largely supplanted by firearms in most roles, crossbows are still widely used for shooting sports, hunting,[2] and when shooting in relative silence is an important consideration. Construction[edit] Kruisboog. Klassieke kruisboog met laadelement. 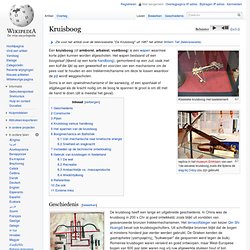