GlassApp - Corning Museum of Glass. Continuous Mile took Liza Lou more than a year to make with a team of Zulu women, who work with Lou in Durban, South Africa. 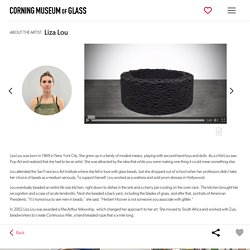 The sculpture is a coiled stacked rope, measuring a mile in length, sewn with more than 4.5 million glossy black beads. The sculpture is a work about work, about process, about finding meaning in the everyday, and about managing many hands to create something that could not be made by one person alone. Lou says, “The idea was to employ as many people as possible, using the slowest possible technique in order to engage a community in the process of making an artwork.”

GlassApp - Corning Museum of Glass. This sculpture uses the form of a necklace as a proxy for the body. 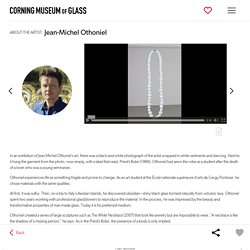 The intentional dents and asymmetry of the 51 hand-blown Venetian beads magnify the beauty and imperfections of the body and skin. Just as skin retains a memory of its experiences over time in the form of scars, Jean-Michel Othoniel explains: “if you injure a ball of molten glass by making an incision or any kind of cut into it, the glass will heal up. But once it cools, the wound will reappear.” Necklace of Glass and Faience Beads. Barrel-Shaped Bead. Primary Description Barrel-Shaped Bead. 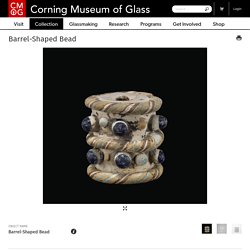 Pendant with Man's Head. Web Description The Phoenicians were an economic and cultural force in the Mediterranean from 1200 B.C. 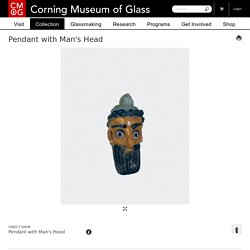 Their realm extended from the Syro-Palestinian coast to North Africa, and they controlled much of the trade in this region and across the Mediterranean. They became skilled glassworkers who fashioned technically masterful beads and developed unique forms of pendants made by core forming. These objects were often traded. The powerful port city of Carthage (located in modern Tunisia), which was established by 800 B.C., was the center of production for many of these beads and pendants.

Portable Shrine. Big Bear. Web Description Sherry Markovitz began making paintings and large-scale sculpture with beads in the early 1980s, and she is internationally known for her mixed-media animal heads. 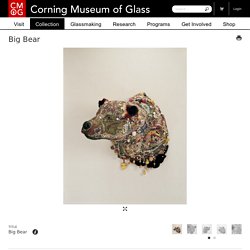 Her inspiration comes from ethnic, folk, tribal, and Native American traditions, rather than from contemporary figural or abstract art. Big Bear may be appreciated more as a symbolic power object than as a hunting trophy. Beaded Basket Depicting a Couple. Web Description As England moved from the medieval period into the Renaissance, needlework grew in popularity and began to move away from purely ecclesiastical decoration. 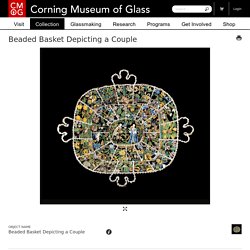 The Protestant Reformation helped to usher in new forms of embroidery and embroiderers. Professional male embroiderers continued to work for the court and the nobility, but a growing amateur group of upper- and upper- middle-class women used embroidery as an appropriate form of leisure and ladylike behavior. Glass beads began to be incorporated into English embroidery in the 17th century. Elaborate beadwork baskets are thought to have been created as gifts in celebration of a child’s christening or a wedding, with their form based on types of silver baskets that are known to have been used in christening ceremonies. Beaker. 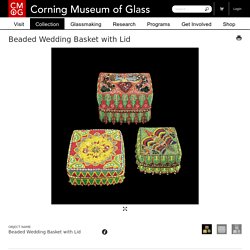 The location and the diverse natural resources prompted cultural contact, along with influences from both India and China, but despite these interactions, many native cultures and traditions remain largely intact in Indonesia. The earliest glass beads in Indonesia came from Chinese and Indian traders. Glass beads are considered to be heirlooms in many Indonesian cultures, and they hold great importance for their owners.

Europeans who wanted to control the Indonesian spice trade (the Portuguese were the first to reach the islands) began to import large numbers of glass seed beads into the region in the 16th century, and beadwork was incorporated into Indonesian arts and crafts. Evening Bag. Necklace I. Primary Description Colorless non-lead glass, opaque red glass enamel, metallic bronze and silver, coral red; blown, tooled, enameled, assembled. 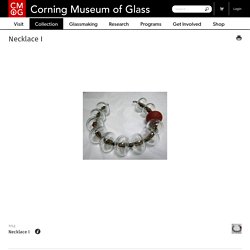 Necklace comprised of twelve slightly flattened hemi-spherical bubbles of colorless (tooled holes on broad sides), third bubble from one end has been completely covered in red enamel mixed with sand; bubbles are strung together with four strands of silver wire, where wires passes through each bubble they are strung with bronze beads (with scattered beveled edges and sides) interspersed with coral beads; flattened silver bead spacer between each glass bead; both strand ends with round silver beads and double metal hook closure; engraved in block letters around the outside opening of final glass bead (at end with red bead): "MIEKE GROOT94". Teapot and Beaded Cozy. Neckpiece. Web Description Jacqueline Lillie, who is internationally recognized for her work in beads and mixed media, is the only artist to have received a Rakow Commission for jewelry from The Corning Museum of Glass. 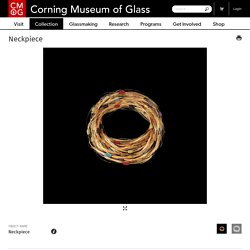 Lillie was originally inspired by the early 20th-century jewelry produced by the Wiener Werkstätte (Vienna Workshops), but her interests later expanded to include African and Native American jewelry, Russian Constructivist painting and graphics, Art Deco design, and the wide-ranging products of the Bauhaus. Her intention, she says, is not to revive any style, but to “produce work that reflects attention to minute detail and a subtle use of color.” Lillie’s jewelry often takes the form of neckpieces or brooches constructed of single or multiple beaded spheres, ovals, and squares that she combines with metal. Jump. Primary Description. 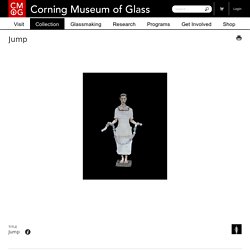