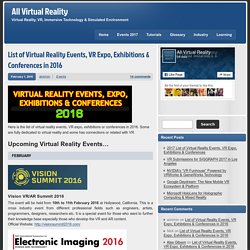 Some are fully dedicated to virtual reality and some has connections or related with VR. Vision VR/AR Summit 2016. Sponsorship // VRX Europe 2017 // May 11-12, 2017 // London, UK. With the wave of new headset releases in 2016, virtual reality is gaining huge traction in both the consumer and enterprise markets. 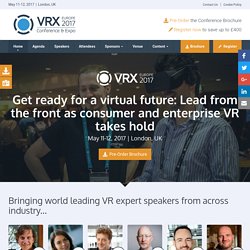 But there are big challenges to address before it becomes truly mainstream. First up, there is a lack of awareness from consumers and business leaders on the incredible power of VR and then there are the questions around how to reduce the cost and size of the technology while improving fidelity and performance. VR Industry. Trello. WVRF World Virtual Reality Forum, Festival & Market - Home. Trello. The Venture Reality Fund. VRVCA. International Virtual Reality Photography Association. 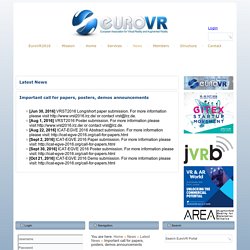 For more information please visit or contact vrst@lrz.de. [Aug 1, 2016] VRST2016 Poster submission. Dominic Eskofier. Discover the cutting edge of VR and AR at GTC Europe. Martin has been fully engaged in all aspects of 3D and Computer Graphics, from modelling, animating and rendering since the early 90s. 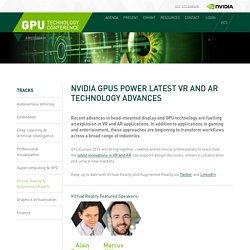 He has lead CGI teams working with companies like IKEA, Volvo, Tetrapak, Orrefors, Swedish Television....... In 2007 he joined the IKEA group as 3D R&D responsible at IKEA Communications AB in Älmhult, Sweden, IKEAs in-house agency responsible for creating global IKEA communication for digital/ Print, including 3D, photo, film, text and sound. Since then, he has devoted his time to setting up the professional 3D processes within the IKEA group, creating standards and tools as well as workflows for working with large scale 3D in a truly global environment. In September 2011 Martin's role changed and he became Development Manager. Here he manages a group of talented co-workers developing and delivering in-house processes and technologies with innovative new companies to meet IKEA business evolving use of 3D content for all use cases.

VR & AR World 2016 Conference. From 19 – 20 October, ExCeL London will host the inaugural VR & AR World event, bringing together expert speakers from a variety of industries and a great selection of VR and AR exhibitors. 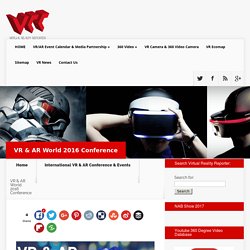 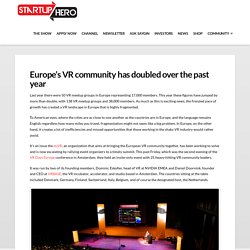 This year these figures have jumped by more than double, with 138 VR meetup groups and 38,000 members. As much as this is exciting news, the frenzied pace of growth has created a VR landscape in Europe that is highly fragmented.