Chicago school (sociology) In sociology and later criminology, the Chicago School (sometimes described as the Ecological School) was the first major body of works emerging during the 1920s and 1930s specialising in urban sociology, and the research into the urban environment by combining theory and ethnographic fieldwork in Chicago, now applied elsewhere. 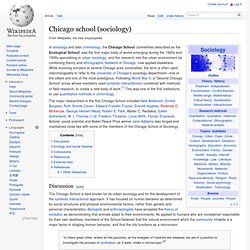 While involving scholars at several Chicago area universities, the term is often used interchangeably to refer to the University of Chicago's sociology department—one of the oldest and one of the most prestigious. Following World War II, a "Second Chicago School" arose whose members used symbolic interactionism combined with methods of field research, to create a new body of work.[1] This was one of the first institutions to use quantitative methods in criminology. Classical school. In criminology, the Classical School usually refers to the 18th-century work during the Enlightenment by the utilitarian and social contract philosophers Jeremy Bentham and Cesare Beccaria. 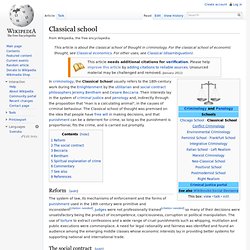 Positivism. Positivism is a philosophy of science based on the view that information derived from logical and mathematical treatments and reports of sensory experience is the exclusive source of all authoritative knowledge,[1] and that there is valid knowledge (truth) only in scientific knowledge.[2] Verified data received from the senses are known as empirical evidence.[1] This view holds that society, like the physical world, operates according to general laws. 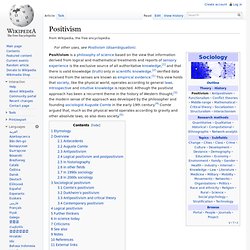 Introspective and intuitive knowledge is rejected. Although the positivist approach has been a recurrent theme in the history of Western thought,[3] the modern sense of the approach was developed by the philosopher and founding sociologist Auguste Comte in the early 19th century.[4] Comte argued that, much as the physical world operates according to gravity and other absolute laws, so also does society.[5] Anthropological criminology. History[edit] The physiognomist Johann Kaspar Lavater (1741–1801) was one of the first to suggest a link between facial figures and crime.[1] Victor Hugo referred to his work in Les Misérables, about what he would have said about Thénardier's face. 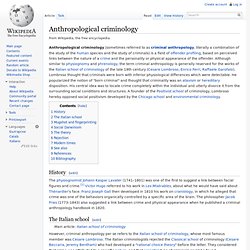 Franz Joseph Gall then developed in 1810 his work on craniology, in which he alleged that crime was one of the behaviors organically controlled by a specific area of the brain. The philosopher Jacob Fries (1773–1843) also suggested a link between crime and physical appearance when he published a criminal anthropology handbook in 1820. The Italian school[edit] However, criminal anthropology per se refers to the Italian school of criminology, whose most famous member was Cesare Lombroso. Cesare Lombroso. Cesare Lombroso (born Ezechia Marco Lombroso; Italian: [ˈtʃɛzare lombˈroso]; 6 November 1835 – 19 October 1909), was an Italian criminologist, physician, and founder of the Italian School of Positivist Criminology. 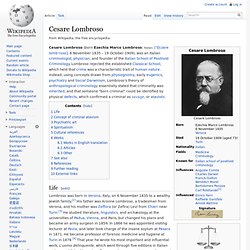 Lombroso rejected the established Classical School, which held that crime was a characteristic trait of human nature. Instead, using concepts drawn from physiognomy, early eugenics, psychiatry and Social Darwinism, Lombroso's theory of anthropological criminology essentially stated that criminality was inherited, and that someone "born criminal" could be identified by physical defects, which confirmed a criminal as savage, or atavistic. Life[edit] Concept of criminal atavism[edit] Lombroso's general theory suggested that criminals are distinguished from noncriminals by multiple physical anomalies. Besides the "born criminal", Lombroso also described "criminaloids", or occasional criminals, criminals by passion, moral imbeciles, and criminal epileptics. Psychiatric art[edit] Positivist school.

In criminology, the Positivist School has attempted to find scientific objectivity for the measurement and quantification of criminal behavior. 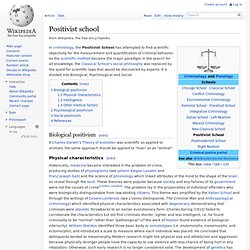 As the scientific method became the major paradigm in the search for all knowledge, the Classical School's social philosophy was replaced by the quest for scientific laws that would be discovered by experts. It is divided into Biological, Psychological and Social. Biological positivism[edit] If Charles Darwin's Theory of evolution was scientific as applied to animals, the same approach should be applied to "man" as an "animal". Physical characteristics[edit] Intelligence[edit] There are a number of reputable studies that demonstrate a link between lower intelligence and criminality. Other medical factors[edit] Testosterone and adrenaline have been associated with aggression and violence, and the arousal and excited state associated with them.