Tools for Therapy encourage people to open up about their emotions. Design Academy Eindhoven graduate Nicolette Bodewes has created a tactile toolkit designed to be used in psychotherapy sessions. 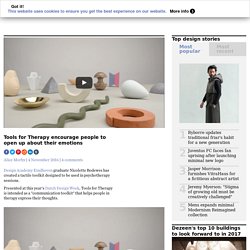 Presented at this year's Dutch Design Week, Tools for Therapy is intended as a "communication toolkit" that helps people in therapy express their thoughts. Bodewes designed the kit – which features two sets of objects, round sheets of paper and a workbook – after her own experiences with therapy sessions. "I went into therapy myself – I had a burnout when I was 28, so I was quite young," she told Dezeen.

"I came into the situation where I had different kinds of therapies at the same time. " Wearable technology. Sensor technology can improve office design, says Haworth. Haworth white papers: sophisticated sensors could contribute to a healthier and happier workforce by tracking the way offices are used and adjusting them automatically, according to new research by US furniture giant Haworth. 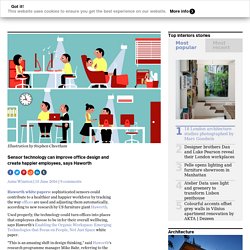 Used properly, the technology could turn offices into places that employees choose to be in for their overall wellbeing, says Haworth's Enabling the Organic Workspace: Emerging Technologies that Focus on People, Not Just Space white paper. "This is an amazing shift in design thinking," said Haworth's research programme manager Mike Bahr, referring to the notion that better office design could improve people's lives.

"If so, why wouldn't you want to work at the office? " he said. By constantly monitoring environmental conditions, the way space is being used and even employee's emotional and physical wellbeing, the office of the future will be able to react automatically, the research predicts. This could transform the way employees perceive their workplace. Lab-grown materials form objects for Vivorium lifestyle concept. New York designer Ali Schachtschneider has imagined a future in which biologically grown materials are used to create furniture, garments and tools that would become "extensions of the body". 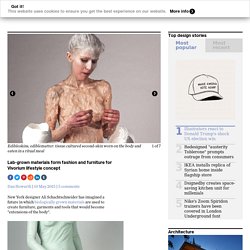 The Vivorium project compiles speculative uses for lab-grown materials such as mycelium, cellulose and tissue cultures. "The project aims to provoke new alternative ways to perceive our bodies in relation to objects and fashion," Schachtschneider told Dezeen. The designer conceived five collections of objects that could be made with these materials. Items in the first collection are called Extensions, as they are designed to "extend the body's abilities". They include Glovextensions, which would extend from the hands to cover and protect varying amounts of the body, and cosmetic explants: tissue cultures that could be added to the body to alter its shape. The Olfactorxtender is a small device that fits into the nose. 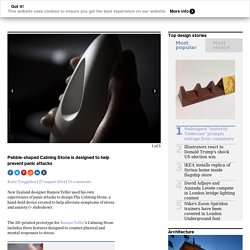 The 3D-printed prototype for Ramon Telfer's Calming Stone includes three features designed to counter physical and mental responses to stress. Cool air is released onto the user’s face to encourage calmer breathing; lavender capsules can be inserted to scent the air and aid relaxation; and a wireless in-ear headphone enables the user to discreetly follow a series of guided meditations. Telfer designed the Calming Stone based on practises he developed to manage his own panic attacks, in conjunction with advice from anxiety psychologists, to offer an alternative method for managing anxiety. "Other than medication, there is not a product specifically designed to help improve mental health," Telfer told Dezeen. Telfer tested ideas for the device during his own panic attacks. Simone schramm's stressball visually communicates stress levels. Mar 05, 2016 simone schramm's stressball visually communicates stress levels simone schramm’s stressball visually communicates stress levels(above) the ball can determine the stress level by measuring the skin conduction with an external sensorall images courtesy of simone schramm simone schramm is a german interface designer interested in the intersection between humans and technology and how we can use the latter to visualize what is hidden to our eyes. with ‘stressball’, she has created an interactive prototype that determines the stress level by measuring the skin conduction with an external sensor. the values gathered by the sensors are then translated into a physical transformation of the surface of the spherical object, oscillating between a smooth and a rough texture. 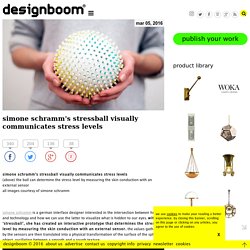 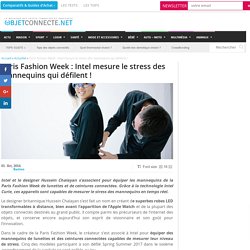