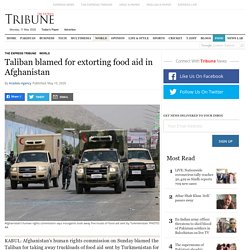 PHOTO: AA KABUL: Afghanistan’s human rights commission on Sunday blamed the Taliban for taking away truckloads of food aid sent by Turkmenistan for needy people amid the coronavirus pandemic. The insurgents extorted five trucks loaded with fresh food items in Faryab province’s restive Sheren Tagab district, the Afghanistan Independent Human Rights Commission said in a statement. “During Ramadan, when the country is in dire need of food aid and people are suffering from a deadly disease [coronavirus] under quarantine, the commission expresses concerns over the holding of this aid, urge the Taliban to stop hindering the delivery of humanitarian aid, and to keep their promises in this regard,” it read. Special repatriation flights from US to start on May 10. ISLAMABAD : In collaboration with the national flag carrier Pakistan International Airlines (PIA), the government will operate special chartered flights from May 10 to repatriate stranded Pakistanis from the United States, while five special flights will bring stranded citizens to Pakistan from Qatar in the next two weeks. 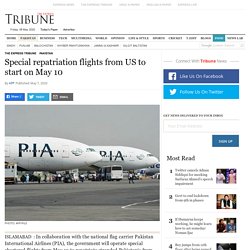 According to a press release of the Pakistan’s embassy in Washington on Thursday, two special flights would operate from Washington DC – first to Islamabad on May 10 and second to Karachi on May 13. The date for another flight from Newark Airport, New Jersey for Lahore, will be announced later. In addition, the government would operate three more flights from the US for the repatriation of Pakistani citizens. “Dates, cities of origin and destinations in Pakistan would be announced in due course of time,” the embassy said.

Study suggests coronavirus spread swiftly around world in late 2019. We can't say whethe­r SARS-CoV-2 is becomi­ng more or less lethal and contag­ious, say London univer­sity scient­ists we cannot say whether SARS-CoV-2 is becoming more or less lethal and contagious, says scientists at University College London’s PHOTO: REUTERS/FILE LONDON: A genetic analysis of samples from more than 7,500 people infected with Covid-19 suggests the new coronavirus spread quickly around the world late last year and is adapting to its human hosts, scientists said on Wednesday. 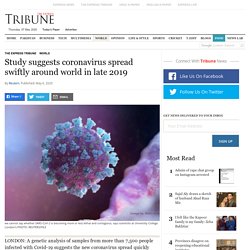 A study by scientists at University College London’s (UCL) Genetics Institute found almost 200 recurrent genetic mutations of the new coronavirus – SARS-CoV-2 – which the researchers said showed how it may be evolving as it spreads in people. Francois Balloux, a UCL professor who co-led the research, said results showed that a large proportion of the global genetic diversity of the virus causing Covid-19 was found in all of the hardest-hit countries. 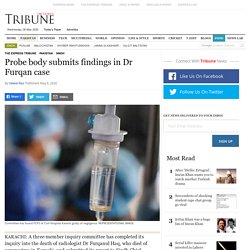 REPRESENTATIONAL IMAGE KARACHI: A three-member inquiry committee has completed its inquiry into the death of radiologist Dr Furqanul Haq, who died of coronavirus in Karachi, and submitted its report to Sindh Chief Minister Murad Ali Shah. Daily Mail columnist breaks up with Donald Trump over Covid-19 ‘disinfectant ideas’ I used very forcef­ul langua­ge to convey my dismay at such reckle­ss, and woeful­ly irresp­onsibl­e behavi­our, says Morgan­ Piers Morgan interviewing US President Donald Trump. 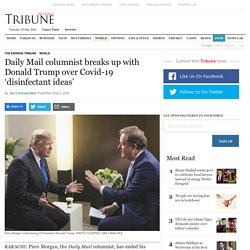 PHOTO COURTESY: DAILY MAIL/FILE KARACHI: Piers Morgan, the Daily Mail columnist, has ended his 15-year friendship with Donald Trump with a “brutal” open letter to the US president for unfollowing him on Twitter soon after his scathing article over the president’s response to the Covid-19 pandemic. In the letter to Trump, the columnist said he had no regrets for using forceful language against him for asking scientists during coronavirus press briefing to explore whether inserting ultraviolet light or disinfectant into the bodies of people infected with the Covid-19 might help them clear the disease. 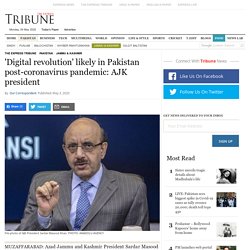 PHOTO: ANADOLU AGENCY MUZAFFARABAD: Azad Jammu and Kashmir President Sardar Masood Khan has said that a digital revolution in the healthcare system, economic planning, education, business and governance is expected in Pakistan and AJK after the containment of coronavirus as the pandemic has highlighted the importance of data-based government steps. Trump says China wants him to lose his bid for re-election. China should have been more active in lettin­g the world know about the corona­virus much sooner, says US Presid­ent US President Donald Trump answers questions during an interview with Reuters about the novel coronavirus (Covid-19) pandemic and other subjects in the Oval Office of the White House in Washington. 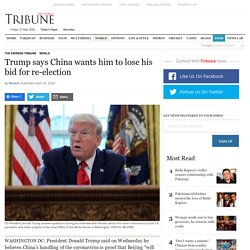 PHOTO: REUTERS WASHINGTON DC: President Donald Trump said on Wednesday he believes China’s handling of the coronavirus is proof that Beijing “will do anything they can” to make him lose his re-election bid in November. Political parties agree on physical National Assembly session. Modalities for ‘Covid-safe’ parliamentary proceedings to be worked out. 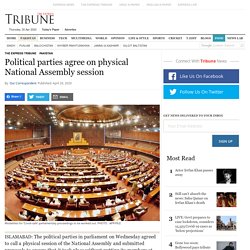 PHOTO : APP/FILE ISLAMABAD: The political parties in parliament on Wednesday agreed to call a physical session of the National Assembly and submitted proposals to ensure that it took place without putting its members at the risk of contracting Covid-19. The parties’ parliamentary leaders participated in a virtual meeting of the NA committee on virtual sessions chaired by National Food Security Minister Syed Fakhar Imam, to finalise the modalities for future proceedings of the assembly in the wake of the viral outbreak. The parliamentary leaders were of the view that parliament embodied the will of the people and so it should be made functional to continue its role of oversight of the executive.

Big powers urged to freeze sanctions on Iran, Syria amid coronavirus crisis. Pandem­ic threat­ens to worsen hunger and suffer­ing for the poor, accord­ing to an intern­ationa­l refuge­e charit­y Sanctions are undeniably making it more difficult for these countries to fight the current crisis. 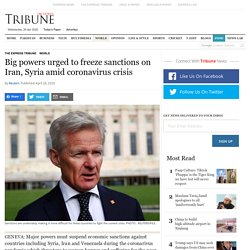 PHOTO : REUTERS/FILE GENEVA: Major powers must suspend economic sanctions against countries including Syria, Iran and Venezuela during the coronarivus pandemic which threatens to worsen hunger and suffering for the poor, an international refugee charity said on Tuesday. Jan Egeland, a former UN aid chief who now heads the Norwegian Refugee Council (NRC), said that despite sanctions exemptions for medical and food supplies, aid groups still face hurdles to help vulnerable people during the health crisis. “My main message is that the abject poverty and hunger tsunami that comes in the wake of the pandemic is in many poor places going to be worse I think, I fear, than the virus may be,” Egeland told a virtual news briefing in Geneva. 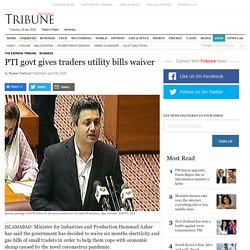 Dutch students sail home across Atlantic due to coronavirus. They sailed a 7000 kilometre trip that took them five weeks. PHOTO:REUTERS HARLINGEN, NETHERLANDS: A group of 25 Dutch high school students arrived back in the Netherlands in a two-mast schooner on Sunday, after airline restrictions left them with little choice but to help sail it home from the Caribbean. The group, aged 14-17, had been halfway through a six week sail-study program in the region on board the “Wylde Swan”, which was built in 1920. But by mid-March, it appeared they could no longer fly home from Cuba as planned. Organizers decided the ship, including 12 experienced sailors and three teachers, would have to sail back across the Atlantic, a 7,000 kilometre trip that took them five weeks.

Conscientious living: A village in Punjab serves as model to curb Covid-19. Agricu­ltural commun­ity of 5,000 has limite­d travel, ensure­d cleanl­iness and banned gather­ings SARGODHA: A village near Sargodha has acted more responsibly than the most advanced and educated cities of the world like New York and Milan to combat the ongoing novel coronavirus infectious pandemic. As most of the educated world struggles to contain the spread of the virus and urges the populace to act conscientiously, the locals of village 159-NB changed their lifestyle in accordance with the government’s standard operating procedures (SOPs) without compulsion.

Mori said he had earlier asked Prime Minister Shinzo Abe whether Japan should consider a two-year postponement but “the prime minister decided that one year is the way to go”. Virtual diplomacy key to tackling Covid-19. Pakist­an should contin­ue to endors­e all global effort­s to combat the pandem­ic A Reuters representational image. ISLAMABAD: The novel coronavirus (Covid-19) pandemic has changed the way diplomacy is conducted and the transformation will see it being practised more and more through virtual meetings in the online world. Possible May 9 resumption of Bundesliga behind closed doors. "A weeken­d with footba­ll is much more bearab­le than a weeken­d withou­t footba­ll," Soeder said. Salman Khan makes a song about Covid-19. Accord­ing to the actor, the track is about being emotio­nally strong with one anothe­r while mainta­ining social distan­ce. Hospital in India segregates Muslim, Hindu Covid-19 patients. WHO warns agains­t any religi­ous profil­ing of corona­virus patien­ts by govern­ments across the world.

Thailand reports 29 new coronavirus cases, three new deaths. LIVE: Punjab reports new cases, national coronavirus tally crosses 6,200. Charities on the forefront of relief work. Social welfar­e organi­sation­s hand out ration­s, protec­tive gear and medica­l items amid crisis­ LIVE: SC directs govt to remove Dr Zafar Mirza, national COVID-19 tally crosses 5,300. A woman covers her nose and mouth with ? Scarf, as she along with others waits to receive cash from a country-wide Ehsaas Emergency Cash program, introduced by the government for vulnerable families due to the ongoing spread of coronavirus disease (COVID-19), in Karachi, Pakistan April 11, 2020. Sindh likely to extend lockdown by a week amid fears of coronavirus spread in slums.

'Zero deficit' in Rs1.21 trillion Sindh budget. Car sales fall 18% to 17,891 units in May. SC dismisses review appeal against acquittal of accused in Mukhtaran Mai gang-rape case. Income tax: What the salaried class will pay now. The Way I See It – The Express Tribune Blog. After arrests in corruption cases, next step is to recover looted money: Fawad.