How To Remove The Profile Picture From Your Microsoft Account. Windows 10 insists you connect your Microsoft account with your PC. 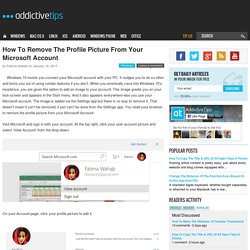 It nudges you to do so often and locks you out of using certain features if you don’t. When you eventually cave into Windows 10’s insistence, you are given the option to add an image to your account. This image greets you on your lock screen and appears in the Start menu. And it also appears everywhere else you use your Microsoft account. The image is added via the Settings app but there is no way to remove it. Visit Microsoft and sign in with your account. On your Account page, click your profile picture to edit it. At the bottom of the edit profile picture page, you will see a ‘Remove’ button. Any time you upload a new photo, it will sync through your Microsoft account (if you’re signed in) and appear across all your devices. Strictly speaking, this isn’t a big deal if you’ve used your own account on your personal PC. Advertisement. Is Windows Taking Forever to Shut Down? Try This! Updated by Tina Sieber on December 26, 2016. 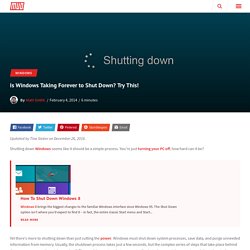 Shutting down Windows seems like it should be a simple process. You’re just turning your PC off; how hard can it be? How To Shut Down Windows 8 How To Shut Down Windows 8 Windows 8 brings the biggest changes to the familiar Windows interface since Windows 95. The Shut Down option isn’t where you’d expect to find it – in fact, the entire classic Start menu and Start... Read More Yet there’s more to shutting down than just cutting the power. Here are the reasons why your Windows 7 or Windows 8/8.1 PC might not shut down, and how to fix it. Note that we have previously covered hacks to speed up the Windows 7 shutdown process and how to speed up Windows 10 from boot to shutdown. Software Problems Programs are a common cause of shutdown issues. 5 Lost Features You Can Resurrect in Windows 10. Windows 10 is routinely crowned “the best operating system to come from Microsoft – ever!” 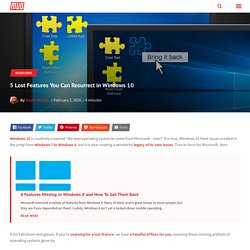 Read More It isn’t all doom and gloom. Option 1: Missed Features Installer The Missed Features Installer for Windows 10 (MFI10) is the app that has been forging the path of replacing retired features, and it’s continuing the excellent work started way back when Windows users were outraged at feature loss between Windows XP and Windows Vista. Some buttons immediately open an installer. The Worst Windows 10 Blunders of the Past Year. Microsoft got a lot of things right with Windows 10, providing some great new features. 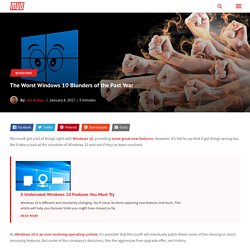 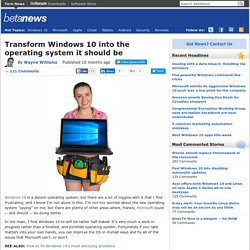 I’m not too worried about the new operating system "spying" on me, but there are plenty of other areas where, frankly, Microsoft could -- and should -- be doing better. In the main, I find Windows 10 to still be rather half-baked. It’s very much a work in progress rather than a finished, and polished operating system. Fortunately if you take matters into your own hands, you can improve the OS in myriad ways and fix all of the issues that Microsoft can't, or won't. SEE ALSO: How to fix Windows 10's most annoying problems Stop the Spying Microsoft likes to know how you use Windows 10, and the operating system "gets to know you" in various ways in order to provide a "more personal computing experience". For this, the best option is to use W10Privacy. 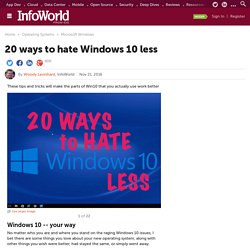 Click Start > Settings > Update & security. Step 2. On the left, choose Windows Update. On the right, click the link to Update history. You see a list of all the Windows cumulative updates and other updates (say, for Office, .Net, drivers, and the like). Step 3. Windows Update shows you an old-fashioned Control Panel list of updates, which looks exactly like the list in Windows 7 and 8.1. Step 4. Then there are the major updates -- what used to be called Service Packs. You installed the update fewer than 10 days agoYou didn’t delete the backup files (for example, running Disk Cleanup and choosing “Previous Windows installation(s)” will delete the backup files) Microsoft identifies major versions of Win10 with four-digit numbers (“Version 1607”), while cumulative updates get KB numbers and OS Build numbers (“OS Build 14393.448”).