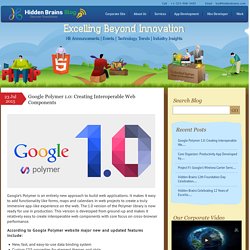 It makes it easy to add functionality like forms, maps and calendars in web projects to create a truly immersive app-like experience on the web. The 1.0 version of the Polymer library is now ready for use in production. Project Fi: Googleâs Wireless Carrier Service. Google recently launched Project Fi, a program aimed at delivering a fast, reliable and easy wireless experience in close collaboration with leading carriers, hardware makers, and users. 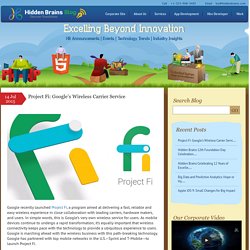 In simple words, this is Google’s very own wireless service for users. As mobile devices continue to undergo a rapid transformation, it’s equally important that wireless connectivity keeps pace with the technology to provide a ubiquitous experience to users. Google is marching ahead with the wireless business with this path-breaking technology. Google has partnered with top mobile networks in the U.S. 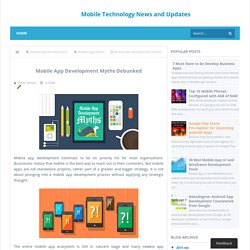 Businesses realize that mobile is the best way to reach out to their customers. But mobile apps are not standalone projects, rather part of a greater and bigger strategy. It is not about plunging into a mobile app development process without applying any strategic thought. The entire mobile app ecosystem is still in nascent stage and many newbie app developers have completely wrong notions about the entire process. This blog post outlines several myths that will help the mobile entrepreneur chart a path and know what’s next in the journey right from ideation, design, development to app store optimization and promotion. iCloud Support, Apple TV and Siri: Everything you Wanted to Know About HomeKit. Mobile App Development Services. Top 5 Tips to Improve User Engagement Level for Mobile Applications. The mobile app world is a jam packed place with millions of apps and the numbers keeps on rising and continues to explode. 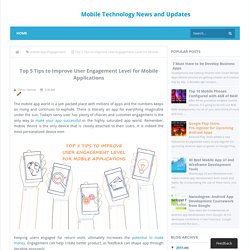 There is literally an app for everything imaginable under the sun. Today’s savvy user has plenty of choices and customer engagement is the only way to make your app successful in the highly saturated app world. Remember, mobile device is the only device that is closely attached to their users. It is indeed the most personalized device ever. Keeping users engaged for return visits ultimately increases the potential to make money. Apple Music: The Revolutionary Music Streaming Service. Apple Music, one of the most awaited additions to iOS was announced at the WWDC15 on Monday, 8 June, 2015 along with iOS 9. 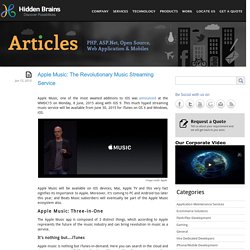 This much hyped streaming music service will be available from June 30, 2015 for iTunes on OS X and Windows, iOS. Apple Music will be available on iOS devices, Mac, Apple TV and this very fact signifies its importance to Apple. Moreover, it’s coming to PC and Android too later this year; and Beats Music subscribers will eventually be part of the Apple Music ecosystem also. Apple Music: Three-in-One The Apple Music app is composed of 3 distinct things, which according to Apple represents the future of the music industry and can bring revolution in music as a service.

It’s nothing but….iTunes. I/O 2015: Topmost Announcements from Google. Big Data and Predictive Analytics: Hope or Hype? Predictive analytics is not a new phenomenon. 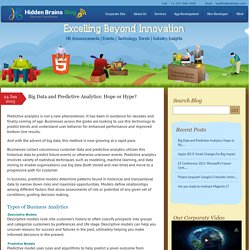 It has been in existence for decades and finally coming of age. Businesses across the globe are looking to use this technology to predict trends and understand user behavior for enhanced performance and improved bottom-line results. And with the advent of big data, this method is now growing at a rapid pace. Businesses collect voluminous customer data and predictive analytics utilizes this historical data to predict future events or otherwise unknown events. Project Jacquard: Googleâs Futuristic Innovation in âConnectedâ Apparel.

We all are getting familiar to buzzwords like Connected Living and Connected World – thanks to the growing dominance of the Internet of Things. 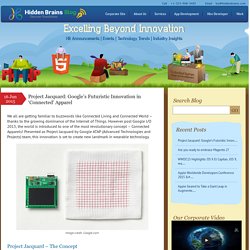 However post Google I/O 2015, the world is introduced to one of the most revolutionary concept – Connected Apparels! Presented as Project Jacquard by Google ATAP (Advanced Technologies and Projects) team, this innovation is set to create new landmark in wearable technology. Project Jacquard – The Concept Project Jacquard is an innovative concept by Google that involves transforming everyday objects such as clothes and furniture into interactive surfaces by weaving touch and gesture interactivity into any textile – using standard, industrial looms. Likely inspired from the Jacquard weaving process invented by Joseph Marie Jacquard, this project is about creating conductive yarn that turns clothing into a device interface. Apple iOS 9: Small Changes for Big Impact. Last week Apple unveiled iOS 9 its operating system for iPhone and iPad at WWDC. 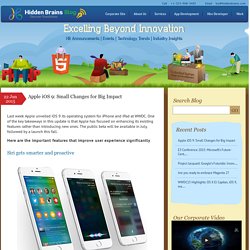 One of the key takeaways in this update is that Apple has focused on enhancing its existing features rather than introducing new ones. The public beta will be available in July, followed by a launch this fall. Here are the important features that improve user experience significantly. Apple Worldwide Developers Conference 2015 – The D-day is Here! Finally, the D-day has arrived, and just a few hours to go for the much-awaited Apple keynote at 10 am in San Francisco at the Worldwide Developer’s conference – WWDC15. 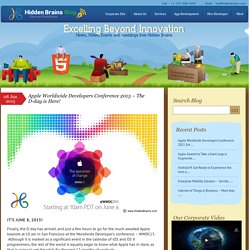 Although it is marked as a significant event in the calendar of iOS and OS X programmers, the rest of the world is equally eager to know what Apple has in store, as that is going to set the pitch for the next 12 months of products. The excitement as always have constantly raised the bar of expectations for Apple enthusiast (and rivals too), thanks to the cutting-edge marketing techniques from Apple Inc. Google Play Store: Pre-register for Upcoming Android Apps. Android Play Store added a new feature for its registered users, to pre-register for upcoming Android apps or games on Google Play. 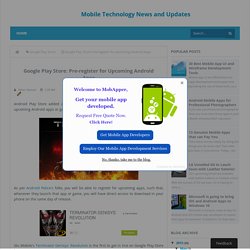 As per Android Police's folks, you will be able to register for upcoming apps, such that, whenever they launch that app or game, you will have direct access to download in your phone on the same day of release. Google Play Store is now allowing you to select publishers to put their apps and games for "pre-registration" before they are ready for sale. These titles have a Pre-register button where the Buy / Install button would normally live.