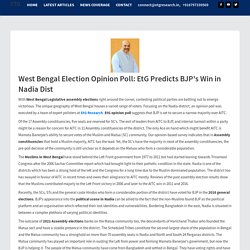 The unique geography of West Bengal houses a varied range of voters. Focusing on the Nadia district, an opinion poll was executed by a team of expert pollsters at EtG Research. EtG opinion poll suggests that BJP is set to secure a narrow majority over AITC. Of the 17 Assembly constituencies, five seats are reserved for SC’s. West Bengal Election Opinion Poll: EtG Predicts Rise of BJP in Alipurduar Dist.

Alipurduar district was carved out from Jalpaiguri on 25th June 2014, as the 20th district in the state of West Bengal.The district consists of Alipurduar municipality and six community development blocks viz Madarihat–Birpara, Alipurduar–I, Alipurduar–II, Falakata, Kalchini and Kumargram. 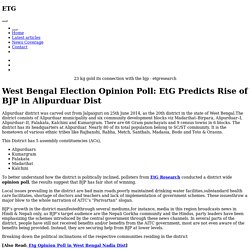 There are 66 Gram panchayats and 9 census towns in 6 blocks. The district has its headquarters at Alipurduar. Nearly 80 of its total population belong to SC/ST community. It is the hometown of various ethnic tribes like Rajbanshi, Rabha, Metch, Santhals, Madasia, Bodo and Toto & Oraons. This District has 5 assembly constituencies (ACs), Alipurduars Kumargram Falakata Madarihat Kalchini To better understand how the district is politically inclined, pollsters from EtG Research conducted a district wide opinion poll, the results suggest that BJP has fair shot of winning. AIADMK Caste Survey - Tamil Nadu Politics - EtG Research. AIADMK Caste survey : Solution for political injustice or a strategy to get ahead on the polls On 1st December, Tuesday, Tamil Nadu Chief Minister Edappadi K Palaniswamy of the All India Anna Dravida Munnetra Kazhagam (AIADMK) announced that the stategovernment would model a commission to work out the processfor collecting caste data.The announcement was made hours after a delegation of the Pattali Makkal Katchi led bythe former Union Minister Anbumani Ramadoss met Palaniswamy to stipulate a 20% quota for the Vanniyar community for government jobs and educational institutions. 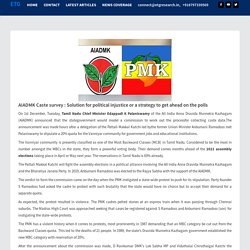 The Vanniyar community is presently classified as one of the Most Backward Classes (MCB) in Tamil Nadu. Rajinikanth's Political Exit before Entry - ETG Research. Rajinikanth’s dive into politics, what could the resulting ripples be On December 3rd , Super Star Rajinikanth announced that he will be launching his political party, ending years of anticipation and speculation, he intends to announce a January 2021 launch date for the party on 31st December 2020. 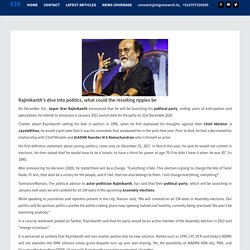 Chatter about Rajinikanth setting his foot in politics in 1996, when he first expressed his thoughts against then Chief Minister J Jayalalithaa; he would claim later that it was his comments that weakened her in the polls that year. Prior to that, he had a decimated his relationship with Chief Minister and AIADMK founder M G Ramachandran who is himself an actor. 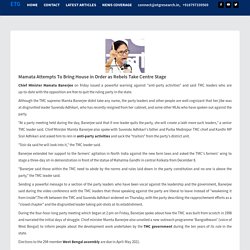 Although the TMC supremo Mamta Banerjee didnt take any name, the party leaders and other people are well cognizant that her jibe was at disgruntled leader Suvendu Adhikari, who has recently resigned from her cabinet, and some other MLAs who have spoken out against the party. "At a party meeting held during the day, Banerjee said that if one leader quits the party, she will create a lakh more such leaders," a senior TMC leader said. Chief Minister Mamta Banerjee also spoke with Suvendu Adhikari's father and Purba Medinipur TMC chief and Kanthi MP Sisir Adhikari and asked him to rein in anti-party activities and sack the "traitors" from the party's district unit. 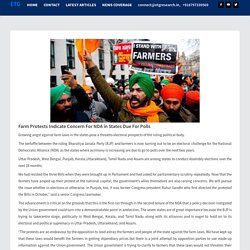 The kerfuffle between the ruling Bharatiya Janata Party (BJP) and farmers is now turning out to be an electoral challenge for the National Democratic Alliance (NDA) as the states where acrimony is increasing are due to go to polls over the next two years. Uttar Pradesh, West Bengal, Punjab, Kerala,Uttarakhand, Tamil Nadu and Assam are among states to conduct Assembly elections over the next 18 months. We had resisted the three Bills when they were brought up in Parliament and had asked for parliamentary scrutiny repeatedly. West Bengal Assembly Election Schedule 2021 - EtG Research. The Central Electoral Commission on Feb 26 released the Assembly election schedule for the four states (West Bengal, Tamil Nadu, Kerala, Assam) and one union territory (Puducherry) in Our largest democracy. 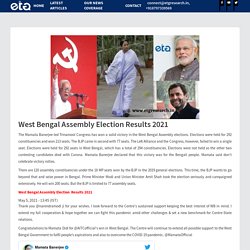 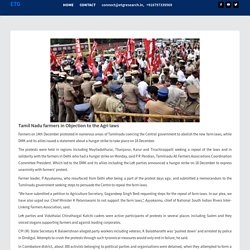 The protests were held in regions including Mayiladuthurai, Thanjavur, Karur and Tiruchirappalli seeking a repeal of the laws and in solidarity with the farmers in Delhi who had a hunger strike on Monday, said P R Pandian, Tamilnadu All Farmers Associations Coordination Committee President. Which led to the DMK and its allies including the Left parties announced a hunger strike on 18 December to express unanimity with farmers’ protest. 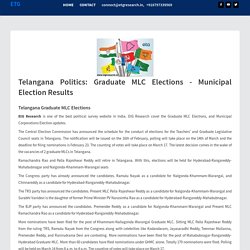 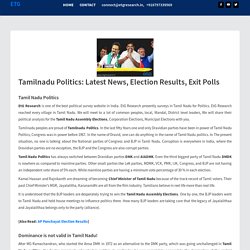 EtG Research presently surveys in Tamil Nadu for Politics. EtG Research reached every village in Tamil Nadu. We will meet to a lot of common peoples, local, Mandal, District level leaders, We will share their political analysis for the Tamil Nadu Assembly Elections, Corporation Elections, Municipal Elections with you. Tamilnadu peoples are proud of Tamilnadu Politics. Tamil Nadu Politics has always switched between Dravidian parties DMK and AIADMK. Kamal Haasan and Rajnikanth are dreaming of becoming Chief Minister of Tamil Nadu because of the track record of Tamil voters. Andhra Pradesh Panchayat Election Results - Districts Wise - EtG Research. Andhra Pradesh Panchayat Election Results - Frist Phase EtG Research is one of the best political survey website in India. We are conducting a survey of most of the people supporting the Ruling party.

EtG Research gathers Political Information from the experiences of many political Experts and Peoples and provides it to all of you. 1. Election of ruling party fans as sarpanches in 81.25% of panchayats2. 15.66 percent for TDP In the first phase, the State Election Commission (SEC) issued notification of elections for 3,249 gram panchayat elections in 12 districts and 525 sarpanches were unanimously elected.