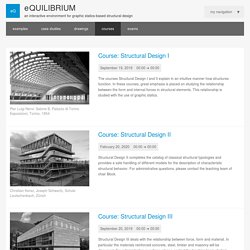 Thrust network analysis is a form-finding method for shells in pure compression developed by Philippe Block. 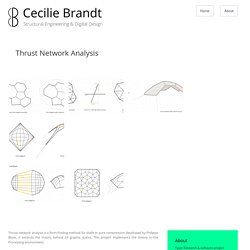 It extends the theory behind 2d graphic statics. MPDA BarcelonaTech. Registration for My Structurae. Food4Rhino. PolyFrame is a geometry-based, structural form finding plugin for Rhinoceros3d based on the principle of the equilibrium of polyhedral frames known as 3D graphic statics. 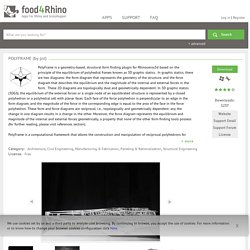 In graphic statics, there are two diagrams: the form diagram that represents the geometry of the structure, and the force diagram that describes the equilibrium and the magnitude of the internal and external forces in the form. These 2D diagrams are topologically dual and geometrically dependent. In 3D graphic statics (3DGS), the equilibrium of the external forces or a single node of an equilibrated structure is represented by a closed polyhedron or a polyhedral cell with planar faces. 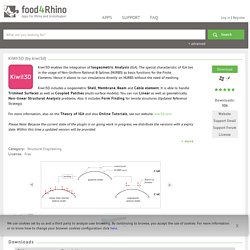 3D enables the integration of Isogeometric Analysis (IGA). The special characteristic of IGA lies in the usage of Non-Uniform Rational B-Splines (NURBS) as basis functions for the Finite Elements. Hence it allows to run simulations directly on NURBS without the need of meshing. Kiwi! 3D includes a isogeometric Shell, Membrane, Beam and Cable element. For more information, also on the Theory of IGA and also Online Tutorials, see our website: kiwi3d.com Please Note: Because the current state of the plugIn is on going work in progress, we distribute the versions with a expiry date. Have fun! DOWNLOAD: www.kiwi3d.com/download. Untitled. CecilieBrandt/K2Engineering. Pier Luigi Nervi in America (part 1) – Hanover – Form Finding Lab.

This summer I took a trip to Dartmouth College Campus (Hanover, New Hampshire, USA) to photographically document the artistry in the Leverone Field House (1962) and the Thompson Arena (1975). 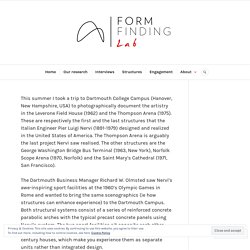 These are respectively the first and the last structures that the Italian Engineer Pier Luigi Nervi (1891-1979) designed and realized in the United States of America. The Thompson Arena is arguably the last project Nervi saw realised. The other structures are the George Washington Bridge Bus Terminal (1963, New York), Norfolk Scope Arena (1970, Norfolk) and the Saint Mary’s Cathedral (1971, San Francisco). The Dartmouth Business Manager Richard W. Interactive Thrust. COMPAS. Block Research Group. More info COMPAS is developed by the Block Research Group of ETH Zurich, with the support of the National Centre for Competence in Research (NCCR) in Digital Fabrication. 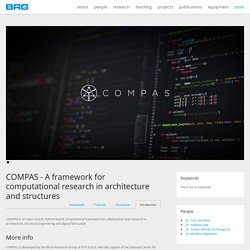 It's main features are: a pure Python base with flexible datastructures, algorithms, and methods geared towards applications in architecture, engineering, and fabrication;geometry processing independent of CAD tools;interoperability with C/C++ code and libraries such as ShapeOp, libigl and Eigen;methods and solvers for numerical computation built around NumPy and SciPy;high peformance computing through GPU acceleration and JIT compilation;plotters and viewers for two-dimensional and basic three-dimensional visualization; andinterfaces to common CAD software and ecosystems. RhinoMembrane v 3.0 For Rhino 6.0. Interactive Thrust. 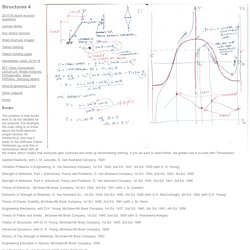 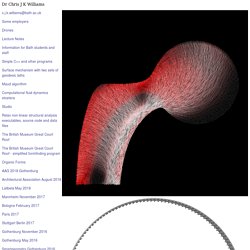 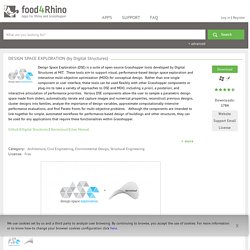 These tools aim to support visual, performance-based design space exploration and interactive multi-objective optimization (MOO) for conceptual design. Rather than one single component or user interface, these tools can be used flexibly with other Grasshopper components or plug-ins to take a variety of approaches to DSE and MOO, including a priori, a posteriori, and interactive articulation of performance priorities.

Various DSE components allow the user to sample a parametric design space made from sliders, automatically iterate and capture images and numerical properties, reconstruct previous designs, cluster designs into families, analyze the importance of design variables, approximate computationally-intensive performance evaluations, and find Pareto fronts for multi-objective problems. Digital Structures. Leonardo Todisco and Caitlin Mueller, Proceedings of the 3rd International Conference on Structures and Architecture, 2016 Funicular structures, which follow the idealized shapes of hanging chains under a given loading, are recognized as materially efficient structural solutions because they exhibit no bending under normal loading conditions and minimize the amount of required members, often reducing the amount of material needed. 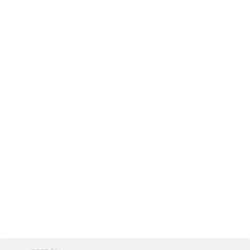 However, non-structural conditions, such as aesthetics, functionality, and geotechnical issues, often prohibit selection of a structurally ideal funicular shape: bending moments inevitably arise, decreasing the structural efficiency of the design. This paper briefly describes how a new design philosophy consisting in the introduction of additional loads, using external post-tensioning cables, can convert a non-funicular structure into a funicular one without changing its starting geometry. Digital Structures. In building design, the concept of authorship is shifting from the traditional notion of the sole architect to a recognition of the modern team-based approach. In particular, the role of the structural engineer as a design partner is increasingly acknowledged, documented, analyzed, and celebrated. Recent books and scholarly articles present a range of contemporary and historical case studies in architect-engineer collaboration that show various ways successful, discordant, and other types of relationships impact design quality.

Prof. Dr. Tom F. Prof. Faustformel Tragwerksentwurf: Amazon.de: Philippe Block, Christoph Gengnagel, Stefan Peters: Bücher. A computational framework for research in architecture and structures. Jenny Sabin. Amazon. Active Statics. Active Statics. MIT Architecture. John Ochsendorf is a structural engineer with multi-disciplinary research interests including the history of construction, masonry mechanics, and sustainable design. Trained in structural mechanics at Cornell, Princeton, and the University of Cambridge, he conducts research on the structural safety of historic monuments and the design of more sustainable infrastructure. An expert on the mechanics and behavior of masonry structures, Ochsendorf collaborates with art historians, architects, and engineers on the study and structural assessment of historic monuments around the world. His group's work on equilibrium methods has been extended to include early stage structural design tools for architects and engineers.