J.K. Rowling: How to Deal with Failure – Personal Growth – Medium. Before the Harry Potter series, J.K. 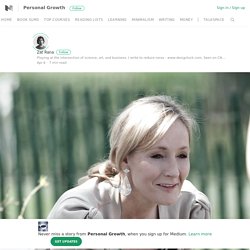 Rowling was clinically depressed. In the early 1990s, she returned to the U.K. to settle down in Scotland near her sister. A three-year stint in Portugal had led to a short, unhappy marriage, and she left the country as a single mother of a newborn child. Rowling spent the next few years struggling to meet ends. “I was jobless, a lone parent, and as poor as it is possible to be in modern Britain, without being homeless,” she said in her commencement speech at Harvard. During this period, her depression took a dark turn, and she considered herself a failure. Luckily, she found it in her to seek help, and writing became an outlet. The idea for the Harry Potter series had come to her years before on a train ride from Manchester to London.

Rowling finished the first two books while still on welfare benefits. The whole world now knows the story of The Boy Who Lived, but not many people know the struggle behind his creation. Less is Generally Not a Bad Thing. 3 Amazing Ways to Benefit from the Law of Attraction. “Doing the tough things sets winners apart from losers.” ― Stephen Richards (Tweet This) Most of you probably already know about the Law of Attraction. 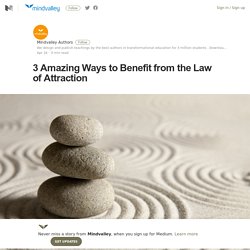 It goes a little something like this: In a nutshell, the Law of Attraction says that you attract into your life whatever you think about. According to the law, your thoughts (both unconscious and conscious) dictate the reality of your life, whether or not you’re aware of it. To work with this energy, you must practice four things: Rohn: 4 Straightforward Steps to Success. Success is nothing more than a few simple disciplines practiced every day. 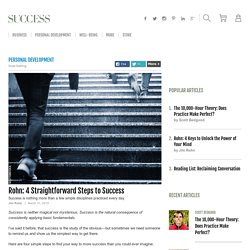 Success is neither magical nor mysterious. Success is the natural consequence of consistently applying basic fundamentals. I’ve said it before, that success is the study of the obvious—but sometimes we need someone to remind us and show us the simplest way to get there. Here are four simple steps to find your way to more success than you could ever imagine: 1. If you hear a good health idea, capture it, write it down. Rohn: 4 Keys to Unlock the Power of Your Mind. 5 Smart Ways to Increase Your IQ (Because It’s Not Set in Genetic Stone) I only recently discovered there is a secret society for people with high IQs. 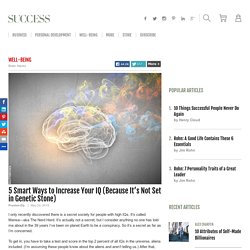 It’s called Mensa—aka The Nerd Herd. It’s actually not a secret, but I consider anything no one has told me about in the 39 years I’ve been on planet Earth to be a conspiracy. So it’s a secret as far as I’m concerned. To get in, you have to take a test and score in the top 2 percent of all IQs in the universe, aliens included. (I’m assuming these people know about the aliens and aren’t telling us.) That is the stupidest thing I could ever possibly even imagine imagining, was the first thought that came to me when I learned about this. 28 Ideas for Becoming 5 Times More Productive Every Week — Personal Growth. 7 habits of exceptionally successful remote employees. I am an extrovert. 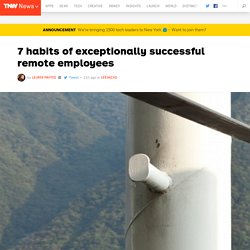 I gain energy from being around others and thrive on communication. So when I first considered joining a fully remote team, I was hesitant. Working from home was a new frontier for me – one that I was unsure I would like. When I accepted my role at Aha! Self Journal: Your Daily Structure for Success by Best Self Co. Risks and challenges Manufacturing a high-quality journal like this is a big undertaking that involves a lot of scheduling, prep time and extremely high attention to detail. 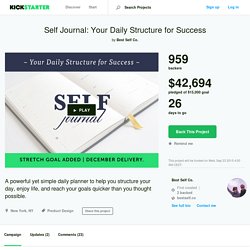 We'll be working with a few manufacturers for the different parts of the journal to ensure all parts are arranged properly, from getting the right premium paper to the navy cloth cover to the bookmark materials to the packaging materials. Our challenge include ensuring each and every SELF journal is finished to the quality of workmanship we are promising to backers and delivered to your door in the time we specified. The 30 second habit with a lifelong impact — Startups, Wanderlust, and Life Hacking — Medium. There are no quick fixes. 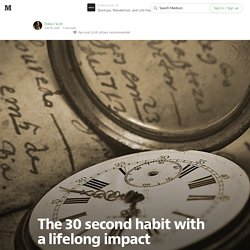 I know this as a social science junkie, who’s read endless books and blogs on the subject, and tried out much of the advice — mostly to no avail. So I do not entitle this post lightly. And I write it only having become convinced, after several months of experimentation, that one of the simplest pieces of advice I’ve heard is also one of the best. 10 Cherished Beliefs of Highly Successful People. The 3 Ways People React to Change. Your Resume Is Boring. Do These Five Things Instead — On Breaking the Mold.

The resume is supposed to be a relatively quick way for someone to get to know your personal and professional accomplishments, skills, interests, and the potential you have to create value in a given setting. 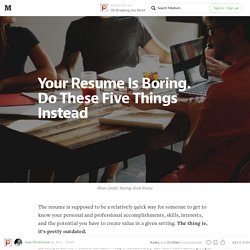 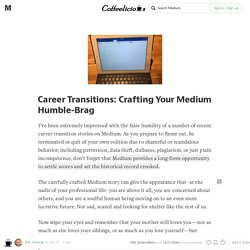 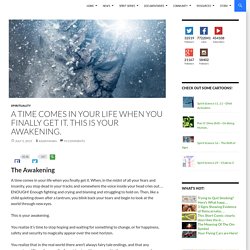 When, in the midst of all your fears and insanity, you stop dead in your tracks and somewhere the voice inside your head cries out… ENOUGH! Enough fighting and crying and blaming and struggling to hold on. Then, like a child quieting down after a tantrum, you blink back your tears and begin to look at the world through new eyes. This is your awakening. You realize it’s time to stop hoping and waiting for something to change, or for happiness, safety and security to magically appear over the next horizon. You realize that in the real world there aren’t always fairy tale endings, and that any guarantee of “happily ever after” must begin with you… and in the process a sense of serenity is born of acceptance. 3 Habits to Stop Doing & 3 Habits to Start Doing. It’s time to… 13 Ways to Take Care of Yourself Every Day. Don’t get stuck in an unhealthy daily grind.

Here’s how to work “me time” into your busy schedule. It’s 7:30 a.m. and your alarm is blaring. Squinty-eyed, you reach for your phone, fumbling to swipe that horrible noise off, sinking back into the mattress, your eyes fading to black again… until you shoot straight up, eyes wide open, realizing you’ve already pushed snooze three times. Four Reasons Every Entrepreneur Needs a Mastermind  It was while interviewing Dale Carnegie for a small newspaper that Napoleon Hill landed a writing gig in 1908 that changed not only his own future but created the concept of the mastermind which became a tool for success for generations to come. The reporter was asked by Carnegie to survey over 500 men - and a few women - many of whom were millionaires and were considered among the most successful individuals in the world.

The 3 Simple Truths of Life. You choose if your dreams become reality. You choose it through focused work, persistence and understanding the bigger picture.