Annotated Bibliography Holocaust. The Holocaust: A Collection of Teaching Resources. Holocaust Teacher Resource Center. You are about to embark on the study of a period of recent history, called the Holocaust. 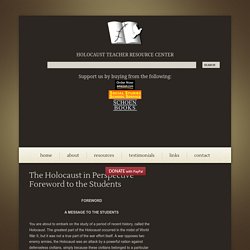 The greatest part of the Holocaust occurred in the midst of World War II, but it was not a true part of the war effort itself. A war opposes two enemy armies, the Holocaust was an attack by a powerful nation against defenseless civilians, simply because these civilians belonged to a particular ethnic population. Two factors played a major role in allowing the Holocaust to happen.

First and foremost was the culmination of centuries of old prejudices, resurrected and magnified by Hitler and his followers. The second factor included modern bureaucracy and the advanced industrial technology needed to carry out genocidal mass murder in the most effective way. Because of who they were, six million human beings were killed by a variety of means. In this manner, six million died. It may seem to you that this happened a long time ago, but in reality, it did not. With my best wishes for your future. The Holocaust - World War II. Beginning in late 1941, the Germans began mass transports from the ghettoes in Poland to the concentration camps, starting with those people viewed as the least useful: the sick, old and weak and the very young. 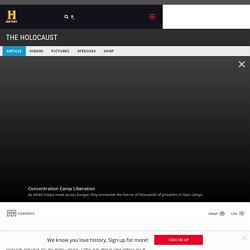 The first mass gassings began at the camp of Belzec, near Lublin, on March 17, 1942. Five more mass killing centers were built at camps in occupied Poland, including Chelmno, Sobibor, Treblinka, Majdanek and the largest of all, Auschwitz-Birkenau. From 1942 to 1945, Jews were deported to the camps from all over Europe, including German-controlled territory as well as those countries allied with Germany. Holocaust Survivor Helen Handler. A small, older woman sits across from me. 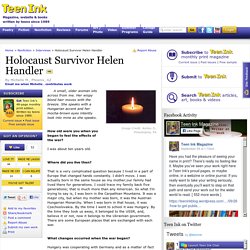 Her wispy blond hair moves with the breeze. She speaks with a Hungarian accent and her mocha-brown eyes intently look into mine as she speaks. How old were you when you began to feel the effects of the war? I was about ten years old. Where did you live then? That is a very complicated question because I lived in a part of Europe that changed hands constantly. What changes occurred when the war began? Hungary was cooperating with Germany and as a matter of fact joined them. I didn't live in a Jewish neighborhood and our neighbors were not Jewish. Things got pretty rough. All kinds of laws began to restrict what Jews could and could not do. What happened when you were forced to leave your home? We walked out only with what we were able to carry in a rucksack.

Where did you go from there, and how long were you there? Well, we were jammed into a cattle car and for four nights and four days we stayed there. Children in the Ghetto. Photograph Activitiy. Looking at the events of the Holocaust through the theme of collaboration and complicity provides educators with a unique understanding of why and how the Holocaust occurred. 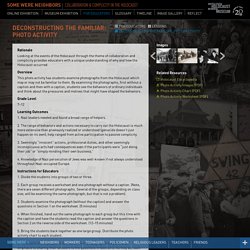 This photo activity has students examine photographs from the Holocaust which may or may not be familiar to them. Holocaust Poetry and Art. By David Graham 1995 Europe's Young stir peacefully in sleep. 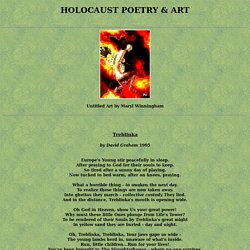 After praying to God for their souls to keep. So tired after a sunny day of playing. Now tucked to bed warm, after on knees, praying. What a horrible thing - to awaken the next day. Oh God in Heaven, show Us your great power! Oh, Treblinka, Treblinka, Your jaws gape so wide - The young lambs herd in, unaware of what's inside. It is easy to swallow these small ones whole - Efficiently you render body from soul. Nothing stops you, Treblinka - hidden away in the woods. Treblinka you child-eater, your wheels spin and turn. Music. Listen - TEREZIN MUSIC FOUNDATION. Fortunoff Edited Testimonies on Youtube. Skip to main content Fortunoff Edited Testimonies on Youtube Parallel Paths (HVT- 8064) As seen through the eyes of survivors, witnesses, and rescuers who had experiences similar to Anne Frank's, this program takes the viewer beyond the hiding place and the Diary. 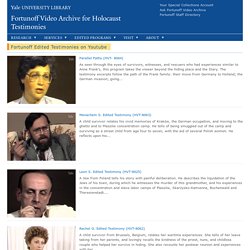