Learn Japanese Language along with me. Browse more at:

What should foreigners do to get jobs in Japan - Blog. Working abroad is a dream of many but not everyone can achieve it. 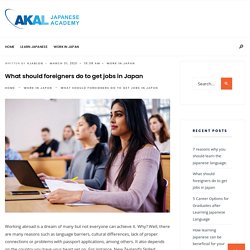 Why? Well, there are many reasons such as language barriers, cultural differences, lack of proper connections or problems with passport applications, among others. It also depends on the country you have your heart set on. For instance, New Zealand’s Skilled Migrant Visa permits permanent residency for foreigners with excellent skills and experience to aid the country’s skills shortages, so finding a job there would be much easier for a foreigner than in a country like the USA where the former president Donald Trump suspended the issuing of new H-1B work visas. Japan, too, is looking for skilled foreign workers to rectify the issue of labour shortage caused by the country’s ageing population. But of course, there will be certain things you would need to do or keep in mind while searching for jobs in Japan and this article will tell you just what those are.

7 reasons why you should learn the Japanese language. - Akal Japanese Academy - Blog. In today’s hyper-connected world, learning a foreign language is a great addition to your resume. 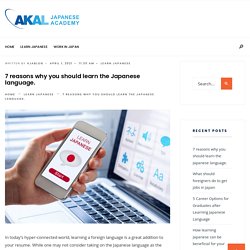 While one may not consider taking on the Japanese language as the first choice when it comes to learning a new language, it actually has a plethora of benefits/advantages. Japan is the third-largest economy in the world after China and the United State, the Japanese language is the 9th most spoken language in the world. How learning Japanese can be beneficial for your career - Akal Japanese Academy - Blog. One should never stop learning, the advantages of learning something new – like let’s say a new language – will always outweigh the disadvantages which are hardly any. 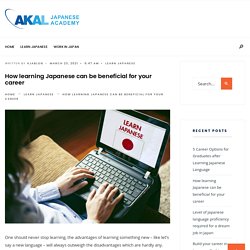 Learning foreign language like Japanese, can really boost your career and is ideal for those who want to work in MNCs or abroad. In this article, let’s take a closer look into how learning the Japanese language can help you in your career growth. It is important to know that Japan, due to its chronic shortage of workers brought on by the ageing population, has been welcoming foreign workers into their animated country and being the third largest economy of the world, its corporations are expanding their businesses all over the world. Level of Japanese language proficiency required for a dream job in Japan - Akal Japanese Academy - Blog. The career scope of learning the Japanese language is quite vast. 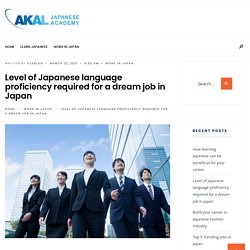 “Why,” you ask? Well, Japan has been experiencing a chronic labour shortage for a while now because of its ageing population. To rectify this, the government has taken measures. In November 2018, the Japanese government passed a new regulation to ease strict immigration laws and foreign labour policies so that foreign workers who want to work in Japan are able to obtain necessary documents without much hassle.

Moreover, as the world’s third-largest economy (as of Feb-2021) and one of the most technologically advanced nations in the world, Japan has 53 Japanese companies in the Fortune Global 500 (as of 2020). With all the positives about Japanese economy, one fact to be acknowledged about Japan is that it has a very high dependency on its native language. How learning Japanese can be beneficial for your career - Akal Japanese Academy - Blog. TITP Job Placement Program – Akal Japanese Academy. 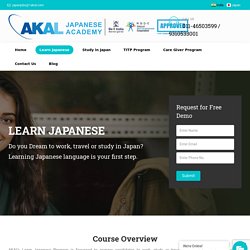 This is covered in 2 parts: Basic 1 - Self introduction, Greetings, common phrases, Introduction to Hiragana, Katakana, Japanese basic sentence framing, vocabulary, and grammar particles explanation, basic verbs etc Basic 2 - Continuation of Basic 1. Kanjis, Grammar practice, Verbal conversations and comprehensions. What to expect from this course Reading One can read and understand typical expressions and sentences written in hiragana, katakana, and basic kanji. Listening One is able to listen and comprehend conversations about topics regularly encountered in daily life and classroom situations and is able to pick up necessary information from short conversations spoken slowly.

Course Details This course is the continuation of Basic course. This course enables one to clear JLPT N4 easily. Elementary Level: The ability to understand basic Japanese. This course is the continuation of Elementary Course. Learn Japanese Language & Work in Japan - Akal Japanese Academy. Build your career in Japanese Fashion Industry - Blog. The Land of the Rising sun is widely acclaimed for its mystifying and animated traditional arts, delectable cuisines, as well as its exquisite flower arrangement. 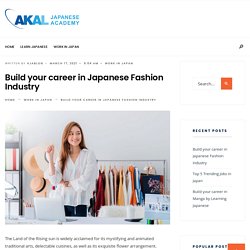 Countries and people have taken inspiration from Japan’s original traditional heritage and fuse those ideas with their artwork. Many renowned luxury fashion houses such as Armani and Dolce and Gabbana have taken inspiration from the Japanese kimonos to revamp their designs and looks. Kourtney Kardashian donning an Attico kimono mini dress back in 2017 is still talk of the Tinseltown to this day.

Japanese styles definitely have a huge impact on the fashion world. Japan’s street fashion allows one to identify themselves as one can clearly see where their interests and passion lie. The brilliance, dynamicity, and nonconformity of Japanese traditional arts is why aspiring designers take their inspiration from Japanese fashion. We wish you all the very best of luck.

Top 5 Trending Jobs in Japan - Akal Japanese Academy - Blog. The Land of the Rising Sun, with its mountainous backdrops, enchanting culture and delectable cuisines, offers ample opportunities for foreigners to experience its rich cultural-heritage and behold its grandeur. 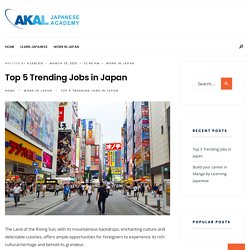 On account of its chronic labor shortage brought on by the decreasing working-age population, Japan has opened its doors for foreigners who are seeking employment opportunities. From IT to Hospitality and Healthcare, various industries are looking for both domestic and foreign employees, especially blue-collar workers. While there are some jobs that don’t require knowledge of the Japanese language, understanding and speaking the language can definitely open more doors for you in Japan.

Let’s start. Build your career in Manga by Learning Japanese - Blog. From Fullmetal Alchemist to One Piece to Tokyo Ghoul, manga graphic novels have captured the eyes and hearts of readers from all over the globe. 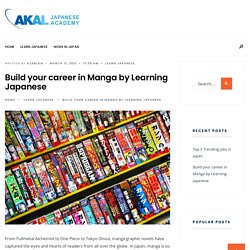 In Japan, manga is so popular that they are read by people of both gender and all ages, and there are more papers used for printing manga than toilet papers. Some manga stories are so captivating that one can’t help but wonder if he/she can create or write his/her manga. Well, if you are one of those people who wants to be a manga artist and put your story out there for the world to enjoy, we support you and wish you the best of luck. However, if you are not familiar with the Japanese language, it might be tricky even though there are many easy manga guides on the Internet. Study japanese. Work in Japan through Government Approved TITP Program - Akal Japanese Academy.