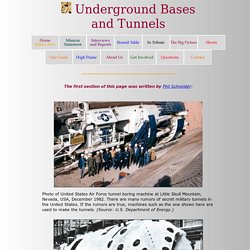 There are many rumors of secret military tunnels in the United States. If the rumors are true, machines such as the one shown here are used to make the tunnels. (Source: U.S. Department of Energy.) This is a $13 million tunnel boring machine (TBM) used for tunneling at the Nevada Test Site. _____________________________ From Dr Bill Deagle's December 2006 Granada Forum Lecture:I took care of John Fialla, who was best friends with Phil Schneider.

"... There you have it: a tunneling machine that creates no muck, and leaves a smooth, vitreous (glassy) tunnel lining behind.Another patent three years later was for: This 1975 patent further specifies that the machine is intended to excavate tunnels up to 12 meters in diameter or more. This machine would also be capable of making a glass-lined tunnel of 40 ft. in diameter or more. A) 3.05 meters (10 ft.) b) 4.73 meters (15.5 ft.) The History of Starcrafts (UFOs): Shoot-downs and Close Encounters. This is the history of shoot-downs of extraterrestrial starcraft "UFOs", and of major close encounters with them. 1941 (July 19) - The first UFO crash of modern times occurred when a disc craft carrying Star Visitors went down in the Pacific Ocean west of Tinian Island (North Mariana Islands chain), 6000 miles west of the U.S. 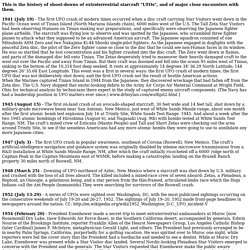 The Tall Zeta Star Visitors had been observing Humans on Tinian making war preparations, and specifically were observing the Japanese fighter plane airfields. The starcraft was flying low to observe and was spotted by the Japanese, who scrambled three fighter planes to attack what they supposed to be an advanced American aircraft. The Japanese squadron consisted of one Mitsubishi A6M Zero and two Nakajima Ki-44 Shooki single-pilot fighters. As the Japanese engaged in dogfights with the peaceful Zeta disc, the pilot of the Zero fighter came so close to the disc that he could see non-Human faces in its window. 1967; 1975 - Northern U.S. 940 B.C. September 19, 1976. <font size=7>PROJECT REDBOOK</font> [IMPORTANT NOTICE: Downloading the Redbook Database and "mirroring" it on other sites is both permitted and encouraged! 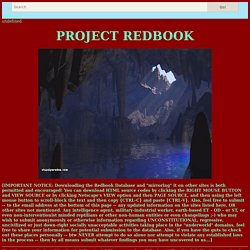 You can download HTML source codes by clicking the RIGHT MOUSE BUTTON and VIEW SOURCE or by clicking Netscape's VIEW option and then PAGE SOURCE, and then using the left mouse button to scroll-block the text and then copy {CTRL-C} and paste {CTRL-V}. Also, feel free to submit -- to the email address at the bottom of this page -- any updated information on the sites listed here, OR other sites not mentioned. Any intelligence agent, military-industrial worker, earth-based ET - OD - or ST, or even non-interventionist minded reptilians or other non-human entities or even changelings ;-) who may wish to submit anonymously or otherwise information regarding UNCONSTITUTIONAL, regressive, uncivilized or just down-right socially unacceptable activities taking place in the "underworld" domains, feel free to share your information for potential submission to the database. Redbook. Link to thePROJECT REDBOOK DATABASE When probing the depths of the underlying and enigmatic connections between the UFO phenomena, Conspiracies, and Underground Bases, one is likely to encounter various levels of "truth". 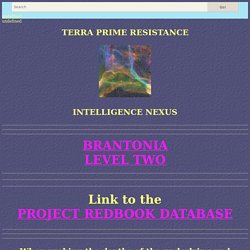 There are scenarios which hide themselves not only within smokescreens and denial, but also within over-exaggeration... or making the claims sound so preposterous that they are seen as unbelievable. This has been an admitted policy of certain agencies who wish to control the facts behind the UFO phenomena for instance. Yet every successful lie is built around a grain of truth. On the OTHER HAND however, as someone said, "Those conspiracies which are too incredible to be believed are by the same right those which most often succeed.

" "Draconicide is the REAL 'final solution'! " Investigate theFASCINATING WEBSITES of PATRICIA G. PROJECT REDBOOK P - T. Undefined "They that see thee shall narrowly look upon thee, and consider thee, saying, Is this the man that made the earth to tremble, that did shake kingdoms; That made the world as a wilderness, and destroyed the cities thereof; that opened not the house of his prisoners? 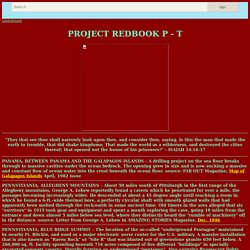 " - ISAIAH 14:16-17 PANAMA, BETWEEN PANAMA AND THE GALAPAGOS ISLANDS - A drilling project on the sea floor breaks through to massive cavities under the ocean bedrock. The opening grew in size and is now sucking a massive and constant flow of ocean water into the crust beneath the ocean floor. source: FAR OUT Magazine; Map of Galapagos Islands April, 1982 issue PENNSYLVANIA, ALLEGHENY MOUNTAINS - About 50 miles south of Pittsburgh in the first range of the Allegheny mountains, George A.