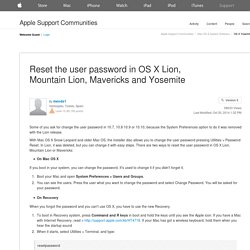 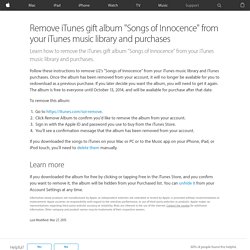 Follow these instructions to remove U2’s "Songs of Innocence” from your iTunes music library and iTunes purchases. Once the album has been removed from your account, it will no longer be available for you to redownload as a previous purchase. If you later decide you want the album, you will need to get it again. The album is free to everyone until October 13, 2014, and will be available for purchase after that date. To remove this album: Karabiner - Software for OS X. Online vCard Converter. How to convert files Select a file from your computer's local drive for the field "vCard-File"Choose the desired output formatClick the "convert" button The converted file is automatically downloaded to your computer. 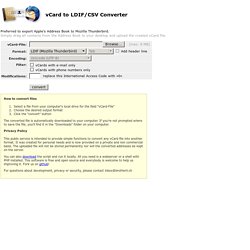 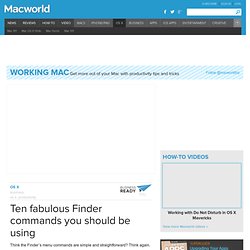 Think again. Add to your desktop repertoire by using hidden menu (and keyboard) commands. All you need to make them appear is the right magic key: Shift, Option, or Control. 1. 4 Wi-Fi Tips from Former Apple Wi-Fi Engineer. Alf Watt, former Apple Wi-Fi engineer and creator of the fantastic Wi-Fi utility, iStumbler, joined us on this week's Mac Geek Gab 509 to talk all things Wi-Fi. 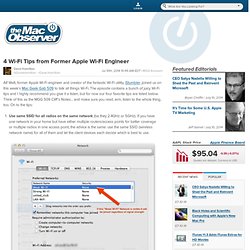 The episode contains a bunch of juicy Wi-Fi tips and I highly recommend you give it a listen, but for now our four favorite tips are listed below. Think of this as the MGG 509 Cliff's Notes... and make sure you read, erm, listen to the whole thing, too. When your Mac slows down, give it a tune-up. Tune up your Macintosh, and clean out the cruft Macs are solid machines, but just like their owners they have a tendency to get lethargic as they age. 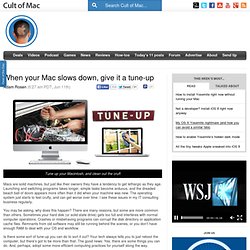 Launching and switching programs takes longer, simple tasks become arduous, and the dreaded beach ball of doom appears more often than it did when your machine was new. The operating system just starts to feel crufty, and can get worse over time. How to troubleshoot a frozen menu bar. The system menu bar in OS X is usually fully accessible, either by moving your mouse to the top of the screen and clicking on it or by using hotkeys. 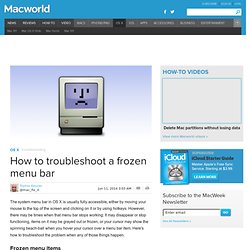 However, there may be times when that menu bar stops working: It may disappear or stop functioning, items on it may be grayed out or frozen, or your cursor may show the spinning beach-ball when you hover your cursor over a menu bar item. Here's how to troubleshoot the problem when any of those things happen. Frozen menu items Whatever the specific problem, the first thing to do is to check whether the frozen menu is the result of a third-party add-on, such as Dropbox, LittleSnitch, Evernote, or the like. AirPort Utility 5.6.1 on OS X 10.9 Mavericks. 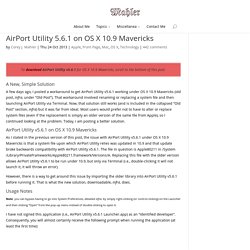 A New, Simple Solution A few days ago, I posted a workaround to get AirPort Utility v5.6.1 working under OS X 10.9 Mavericks (old post, infra, under “Old Post”). That workaround involved renaming or replacing a system file and then launching AirPort Utility via Terminal. Now, that solution still works (and is included in the collapsed “Old Post” section, infra) but it was far from ideal. Most users would prefer not to have to alter or replace system files (even if the replacement is simply an older version of the same file from Apple), so I continued looking at the problem. 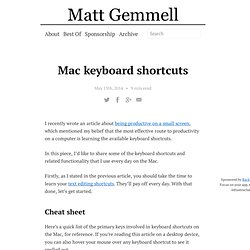 In this piece, I’d like to share some of the keyboard shortcuts and related functionality that I use every day on the Mac. Firstly, as I stated in the previous article, you should take the time to learn your text editing shortcuts. They’ll pay off every day. With that done, let’s get started. Secrets. KeyRemap4MacBook - Software for OS X. Installation Step1 Open a downloaded dmg file, and then open a pkg file in dmg. 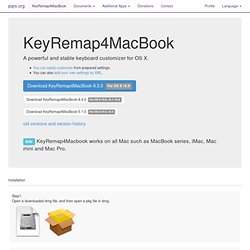 But power users often aren’t aware that OS X comes with a number of its own text-based utilities not found on any other operating system. Learning about these Mac-only programs can make you more productive on the command line and help you bridge the gap between UNIX and your Mac. Update: Thanks to reader feedback, I’ve written about a few more commands in a follow-up post: (And eight hundred more). 1. open open opens files, directories and applications. Mountain Lion tweaks (under the hood) # ~/.osx — # General UI/UX # # Set computer name (as done via System Preferences → Sharing) scutil --set ComputerName "MathBook Pro" scutil --set HostName "MathBook Pro" 14 Mac Hacks That Will Change The Way You Use Your Computer.

These life-changing shortcuts are RIGHT AT YOUR FINGERTIPS. Note that some of these tips and tricks will vary depending on which exact iteration of OS X you have. Use Command + Shift + V to paste text without formatting. If you’ve ever copied and pasted text from a website into an email, you’ve experienced the frustration. All of a sudden your email has this chunk of mismatched text, and it takes you at least a minute fiddling with the font options to make it all conform.

For some programs (like Word), the shortcut is Command + Shift + Option + V. If you need to type a special character, the easiest way is to hold down the letter and a character menu will pop up. From there, you can select the special character you want to use. Security Update 2013-004 (Snow Leopard) SSH login without password. Free Online Favicon and Apple Icons Generator - iconifier.net. How To Reset Your Password Without A System Disk [OS X Tips. Mac OS X Helps Optimize Your Home Wi-Fi Network. This weekend I visited my parents. Top Mac OSX Terminal Commands. Since beginning iOS development in 2011, I've moved over to OSX almost exclusively. One of the best things about using OSX is the terminal app - a 'must have' for developers. There are tons of commands that can do almost anything you'd need, but they can be hard to find. Here's a list of favorites I found on this awesome stackexchange post. Xcode Cheat Sheet. Mac OS X 10.6.8 Update Combo v1.1.

Five Ways to Reset a Lost Administrator Password. Several years ago, I was helping a client upgrade her Mac running Mac OS X 10.5 Leopard, but she couldn’t remember her administrator password. Because she also couldn’t find the original system CDs that shipped with her iMac, I had to resort to some advanced techniques few home users would ever be able to figure out. Starting with 10.7 Lion, you could still call on all those options, but Apple added a method so easy that even an inexperienced user can do it — the Apple ID-based password reset. Let’s explore all the options to reset a password. Which you should use depends on the specific version of Mac OS X, and how the Mac is set up. But first, there’s an important caveat about any of these methods, related to the login keychain. Reset Login Keychain Password -- No matter which of these methods you use to reset a forgotten administrator password, it won’t update the password protecting the account’s login keychain, which stores all of the user’s passwords.

One quirk. Viewing Photo Stream Photos Outside of iPhoto. Photo Stream is a fantastic service that synchronises photos taken on your iDevice with all of your other Apple devices. It does this automatically, over the internet and without you having to do anything. OS X Mavericks: System Requirements. Remove Apps From Your Mac App Store Purchase History [OS X Tips. Make The Mac App Store Re-Download Apps To Your Mac [OS X Tips. The Mac App Store is a great way to download apps to your Mac, as it takes care of the download, the install, and the post-install clean up for you.

Sometimes, however, things can get a bit wonky, whether by accident or design, and you’ll want to go and download an app you think you’ve deleted. How to make a bootable Mavericks install drive. [Editor's note: This article is part of our series of articles on installing and upgrading to Mavericks.] Updated - Convert System OS 9 AppleWorks 6 Files To OS X Pages Files [OS X Tips.