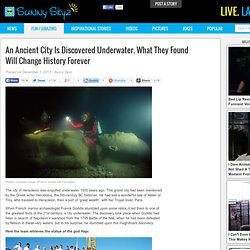 This grand city had been mentioned by the Greek writer Herodotus, the 5th-century BC historian. He had told a wonderful tale of Helen of Troy, who traveled to Heracleion, then a port of 'great wealth', with her Trojan lover, Paris. When French marine archaeologist Franck Goddio stumbled upon some relics, it led them to one of the greatest finds of the 21st century; a city underwater. Here the team retrieves the statue of the god Hapi More and more statues are brought to surface, still in excellent condition The discoveries include the colossal statues of the Egyptian goddess Isis, the god Hapi, and an unidentified Egyptian pharaoh, all preserved in excellent condition by their muddy burial shroud. Amazing Historical Photos Colorized Make the Past Seem Not So Distant. Amazing Historical Photos Colorized Make the Past Seem Not So Distant Posted on November 13, 2013 / Sunny Skyz We were lucky to find these amazing historical photographs colorized by various users/artists on reddit. 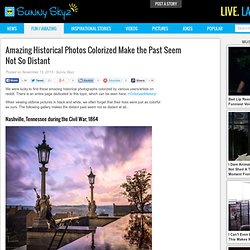 There is an entire page dedicated to this topic, which can be seen here: r/ColorizedHistory/. When viewing oldtime pictures in black and white, we often forget that their lives were just as colorful as ours. The following gallery makes the distant past seem not so distant at all... Nashville, Tennessee during the Civil War, 1864 Kissing the war goodbye, 1945 Lumber worker, circa 1939 Mark Twain in the garden, circa 1900 Joseph Goebbels scowling at photographer after finding out he's Jewish, 1933 Japanese archers, circa 1860 British troops boarding a train in England, 1939 Audrey Hepburn Albert Einstein in Long Island, NY, Summer 1939 Abandoned boy holding a stuffed toy animal, London 1945. 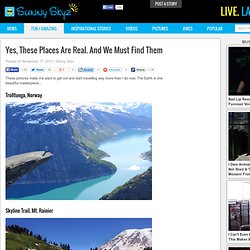 And We Must Find Them Posted on November 17, 2013 / Sunny Skyz. Noahs Ark Has Been Found. Why Are They Keeping Us In The Dark? December 13, 2013 Written by Dan Eden for ViewZone I'm often amazed at our lack of knowledge about history. 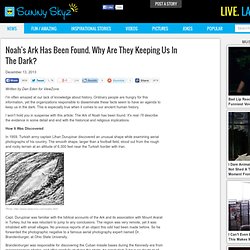 Ordinary people are hungry for this information, yet the organizations responsible to disseminate these facts seem to have an agenda to keep us in the dark. This is especially true when it comes to our ancient human history. I won't hold you in suspense with this article: The Ark of Noah has been found. These European Structures Were Built With Material Other Than Stone. Prepare To Be Amazed. Posted on December 8, 2013 / Sunny Skyz If you travel throughout Europe, you will see some of the most beautiful structures mankind has ever built. 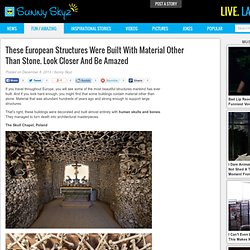 And if you look hard enough, you might find that some buildings contain material other than stone. Material that was abundant hundreds of years ago and strong enough to support large structures. That's right, these buildings were decorated and built almost entirely with human skulls and bones. They managed to turn death into architectural masterpieces. He Was Brave Enough To Go In There... See What He Found. Posted on December 9, 2013 / Sunny Skyz This is truly one of nature's masterpieces. 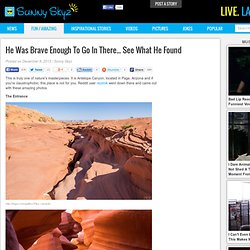 It is Antelope Canyon, located in Page, Arizona and if you're claustrophobic, this place is not for you. Reddit user rezimik went down there and came out with these amazing photos. The Entrance (remizik) Hot On Sunny Skyz:Bad Lip Reading: Twilight Saga... I Dare Animal Lovers To Watch This And Not Shed A Tear... I Can't Even Explain In Words How Happy This Makes Me.

La Muna. What's not to love about 'La Muna', a complete renovation and minor addition of one of the first homes built in the exclusive enclave of Red Mountain in Aspen Colorado. 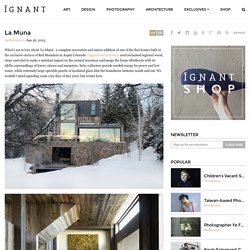 Oppenheim Architects used reclaimed regional wood, stone and steel to make a minimal impact on the natural resources and merge the home effortlessly with its idyllic surroundings of forest, stream and mountain. Solar collectors provide needed energy for power and hot water, while extremely large operable panels of insulated glass blur the boundaries between inside and out. We wouldn't mind spending some cozy days of this years late winter here. Casa no Gerês by Correia Ragazzi Architectos. Correia Ragazzi Architectos designed the ‘Casa no Gerês’, a seemingly floating weekend retreat above the Cavado River in Portugal. 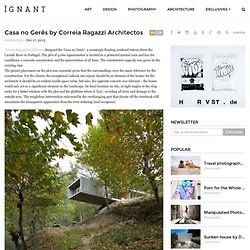 The plot of 4.060 squaremeters is located in a protected natural area and has for conditions a concrete construction and the preservation of all trees. The constructive capacity was given by the existing ruin. The project placement on the plot was essential given that the surroundings were the main reference for the construction. For the clients, the exceptional outlook one enjoys should be an element of the house; for the architects it should be an evident inside space value, but also, the opposite concern was relevant – the house could only act as a significant element on the landscape.

Its final location on site, at right angles to the slop, seeks for a better relation with the plot and the platform where it ‘lays’, avoiding all trees and damage to the outside area.