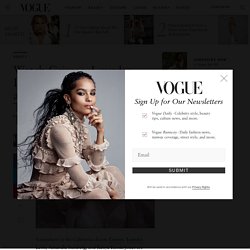 Their multicolored hair blows in the breeze as they cruise down a vacant highway in a top-down convertible with a twist—it’s also a pool. This may be the coolest road trip–meets–motel sleepover in recent history. Dressed in pale pink slip dresses, lace tops, and featherweight shorts, the creatively maladjusted youth have come together to swim, cruise, and lean on one another. The cause for such exuberant celebration? They’re the stars of Stella McCartney’s first Pop perfume video campaign. Instyle.co. What Does Female Empowerment Smell Like? There are hundreds of fragrances bottled each year, all hoping to capture the essence of joy, sex, love, or seduction. 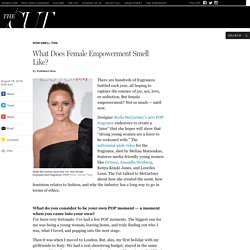 But female empowerment? Not so much — until now. Designer Stella McCartney’s new POP fragrance endeavors to create a “juice” that she hopes will show that “strong young women are a force to be reckoned with.” How social media is changing the feminist movement. A new wave of feminism is here, and its most powerful weapon is the hashtag. 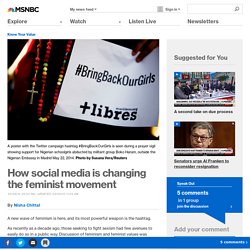 As recently as a decade ago, those seeking to fight sexism had few avenues to easily do so in a public way. Discussion of feminism and feminist values was scarce, if not dispirited; activists had been branded “feminazis” by Rush Limbaugh, and numerous celebrities, like pop star Katy Perry, actress Shailene Woodley, and actress Kaley Cuocco rejected even the word “feminist.” Before Twitter and Facebook exploded as platforms for news, participating in rallies was limited to those who were in those cities, or those who could afford to take time off work and travel; letter-writing was seen only by the recipient of the letter.

How social media is changing the feminist movement. Emma Watson at the HeForShe Campaign 2014 - Official UN Video. Angelina Jolie: I had a double mastectomy to reduce my breast cancer risk. She wrote: “Once I knew that this was my reality, I decided to be proactive and to minimize the risk as much I could. 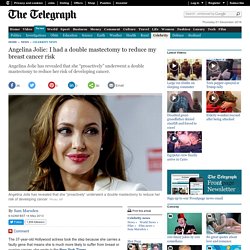 I made a decision to have a preventive double mastectomy. “I started with the breasts, as my risk of breast cancer is higher than my risk of ovarian cancer, and the surgery is more complex.” Jolie, whose movies include Lara Croft: Tomb Raider, Mr and Mrs Smith and The Changeling, said waking up after the major operation to remove the breast tissue felt like a “scene out of a science-fiction film”. Angelina Jolie's Powerful Speech On What Women Really Need From Men.

Angelina Jolie Pitt gave a powerful speech on June 11 at the biannual African Union Summit, using her star power to draw attention to women’s rights across the globe. 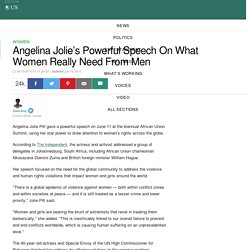 According to The Independent, the actress and activist addressed a group of delegates in Johannesburg, South Africa, including African Union chairwoman Nkosazana Dlamini-Zuma and British foreign minister William Hague. Her speech focused on the need for the global community to address the violence and human rights violations that impact women and girls around the world. “There is a global epidemic of violence against women — both within conflict zones and within societies at peace — and it is still treated as a lesser crime and lower priority,” Jolie Pitt said. 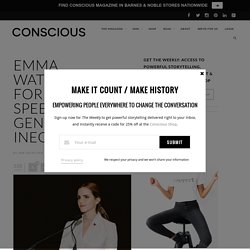 Through her words, she opened the door to a new way of thinking with gender inequality, which affects both men and women within our society. She strongly encouraged men to get involved to help enact this change, as we must strive to create a community that equally values every man and woman within it. If anyone is being stereotyped by society's expectations of being a man or woman, then gender inequality is an issue. Polish abortion law protesters march against proposed restrictions.

Polish women have gathered in cities across the country to protest against a proposal to ban abortions in cases where foetuses are badly damaged or have no chance of survival after birth. 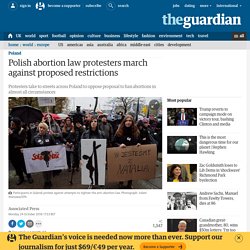 Many wore black, a symbol of mourning for the feared loss of reproductive rights, as they took to the streets of Warsaw, Gdańsk, Łódź, Wrocław, Poznań and other cities and towns across the predominantly Roman Catholic nation of 38 million. “Girls just want to have fundamental rights,” one banner proclaimed. The protests on Monday follow a similar round of street demonstrations in early October, a reaction to a proposal for an even more restrictive law which would have banned abortion in all cases, including rape, and imposed prison sentences of up to five years on women and doctors involved in terminating pregnancies. Massive so-called “black protests” forced lawmakers to abandon that proposal. “The role of the church is now too strong,” she said. Poland abortion: Parliament rejects abortion ban after women stage all-out strike.

Polish lawmakers have voted overwhelmingly to reject draft legislation that would introduce a near-total ban on abortion, following mass protests in over 60 cities across the country. 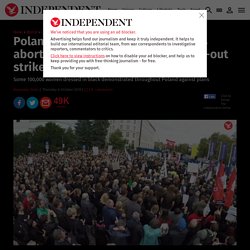 Some 100,000 women dressed in black staged nationwide demonstrations in Poland on Monday against plans to tighten the country's already restrictive abortion rules, including banning the procedure even in cases of rape, with prison terms for women ending a pregnancy. The hastily arranged vote presents the first major domestic setback for the ruling conservatives, of which many members initially backed the proposal. Two weeks ago a majority of lawmakers voted to consider the proposal, sending it to a commission for further study. But the party backed away from it under massive social pressure, and lawmakers voted against it 352-58 on Thursday, with 18 absentations. Polish women go on strike in protest against abortion ban. Social Media and the Fourth Wave of Feminism. Despite its common use today, the word feminism is still met with confusion and disdain. 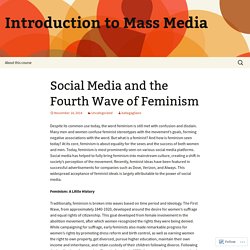 Many men and women confuse feminist stereotypes with the movement’s goals, forming negative associations with the word. But what is a feminist? And how is feminism seen today? At its core, feminism is about equality for the sexes and the success of both women and men. International Women's Day: How Social Media Empowers and Emboldens Women. Social media and feminism have gone hand in hand this past year, with the rise of hashtag activism campaigns like #AskHerMore, #HeForShe, #YesAllWomen and #LikeAGirl. 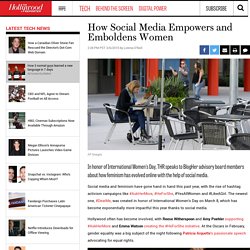 The newest one, #DearMe, was created in honor of International Women's Day on March 8, which has become exponentially more impactful this year thanks to social media. Hollywood often has become involved, with Reese Witherspoon and Amy Poehler supporting #AskHerMore and Emma Watson creating the #HeForShe initiative.

The Guerrilla Girls: 30 years of punking art world sexism. It is 30 years since the Guerrilla Girls – a shifting collective of activists committed to exposing inequality in the art world – came into being, during which time a lot has changed, and a lot hasn’t. As they point out in their latest campaign, galleries that once showed only 10% women artists now show up to 20%. New York museums that, in 1985, gave no women artists a solo exhibition – including the Guggenheim, the Metropolitan and the Whitney – each gave a single woman a solo show last year. “The Whitney museum says, ‘Isn’t it wonderful – we have 30% women in the new collection!’”

#FreetheNipple or #FreeMaleDesire? Has social media really been good for feminism? Web 2.0 was meant to be a game changer for feminism. Academics and social commentators alike told us that social media platforms would be a fabulous resource for our activist practices, allowing us to work collaboratively, communicate with ease, develop ideas, and expand the reach of the movement.

Some argue that social media has resulted in all this and more. How social media is changing the feminist movement. Feminist art activists the Guerrilla Girls get first dedicated UK show. Three decades after they first began exposing inequality in the art world, a group of anonymous mask-wearing feminist activists called the Guerrilla Girls are to get their first dedicated UK show. The group will this summer survey more than 400 European galleries to explore whether museums are reflecting the full diversity of art and art history. It is a battle that still needs to be fought, said Iwona Blazwick, director of the Whitechapel Gallery in London, which is commissioning the Guerrilla Girls. “I was just at the Kunstmuseum in Basel where they have just rehung the entire collection from 1900 to the present and I think there are five women. Feminist artists using smart humor to address sexism with theatre and performance. Polish abortion law protesters march against proposed restrictions.

Polish women go on strike in protest against abortion ban. The Guerrilla Girls: 30 years of punking art world sexism. New show celebrates female fashion photographers. “Men look at women. Women watch themselves being looked at... Thus (the woman) turns herself into an object – and most particularly an object of vision: a sight.” Ashley Graham Now Has Her Own Barbie [Video] Ashley Graham is one of the most prominent plus-size models in the industry — maybe the most. She’s landed coveted campaigns like the SI cover spread, launched her own clothing line, and continuously acts as a vocal advocate for body awareness and acceptance. Graham has even more to celebrate, as Barbie just honored the model by creating a new doll in her likeness, which was unveiled at the 2016 Glamour Woman of the Year Live summit in Los Angeles. The new doll not only shows how much of an impact Graham and other plus-size models have made on society, but it also signifies Barbie’s effort to incorporate all body types in its line of products.

“Ashley Graham is a trailblazer who inspires every woman — and girl — to see the beauty in herself,” said Lisa McKnight, general manager of Barbie, in a press release. Is cleavage out of fashion? Vogue thinks so. December Vogue: Whatever Happened To The Cleavage? Vogue UK Cleavage Over, 70s Boob Trend Hide Big Breasts. Donald Trump's Abortion Policies Would Kill Women - Rolling Stone. What a Donald Trump victory means for women - News from Al Jazeera. Log In. This Is What Women Can Expect From a Donald Trump Presidency. Texas Women Are Inducing Their Own Abortions.

Free the Nipple! The Problem With How We Think About Breasts. Free the nipple founder lina esco on fighting the fight for gender equality. Feminist art activists the Guerrilla Girls get first dedicated UK show. Who is The Other? Conversation with Dee Poku-Spalding - Comme Coco. The Other Festival is Brooklyn's celebration of creative females. New York's first all-female festival: The Other Festival lineup includes Rosario Dawson, Naomi Campbell, and more.

The Other Festival, An Inspiring Event For Women Sponsored By Bustle, Is Coming To Brooklyn. Rosario Dawson on Ladies-Only Other Festival in New York: 'We're Going to the Matriarchy' The Other is New York’s First All-Female Festival. The text of Malala Yousafzai's speech at the United Nations. Problem loading page. Women to go on strike in Poland in protest at planned abortion law. Malala Yousafzai Wants To Be The Prime Minister Of Pakistan - Motto. #FreeTheNipple controversy hits Durban. Tweeting For Equality: Lina Esco and 'Free The Nipple' To free or not to free- the nipple. Here's What the Free the Nipple Movement Has Really Accomplished.