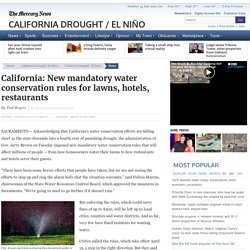 Jerry Brown on Tuesday imposed new mandatory water conservation rules that will affect millions of people -- from how homeowners water their lawns to how restaurants and hotels serve their guests. "There have been some heroic efforts that people have taken, but we are not seeing the efforts to step up and ring the alarm bells that the situation warrants," said Felicia Marcus, chairwoman of the State Water Resources Control Board, which approved the measures in Sacramento. 10 California Cities Running Out of Water Include Bakersfield, Santa Cruz, Fresno. After multiple unusually dry years across the western, southern and central United States, more than 80% of California is now in a state of extreme or exceptional drought, according to the U.S. 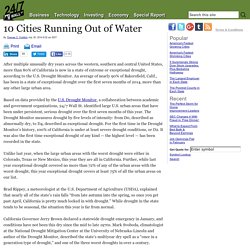 Drought Monitor. An average of nearly 90% of Bakersfield, Calif., has been in a state of exceptional drought over the first seven months of 2014, more than any other large urban area. Based on data provided by the U.S. Drought Monitor, a collaboration between academic and government organizations, 24/7 Wall St. identified large U.S. urban areas that have been under persistent, serious drought over the first seven months of this year. Why the California drought affects everyone. What You Need to Know About the Drought in California—and How It's Affecting You. Why do I keep hearing about the California drought, if it's the Colorado River that we're "killing"? 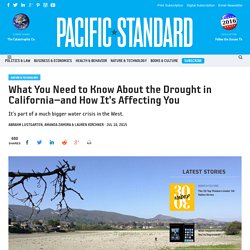 Pretty much every state west of the Rockies has been facing a water shortage of one kind or another in recent years. California's is a severe, but relatively short-term, drought. But the Colorado River basin—which provides critical water supplies for seven states including California—is the victim of a slower-burning catastrophe entering its 16th year. USGS California Water Science Center.

During times of drought, vegetation is visibly dry, stream and river flows decline, water levels in lakes and reservoirs fall, and the depth to water in wells increases. 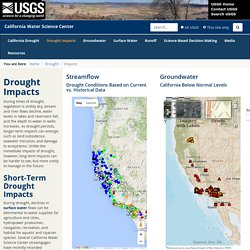 As drought persists, longer-term impacts can emerge, such as land subsidence, seawater intrusion, and damage to ecosystems. Unlike the immediate impacts of drought, however, long-term impacts can be harder to see, but more costly to manage in the future. During drought, declines in surface water flows can be detrimental to water supplies for agriculture and cities, hydropower production, navigation, recreation, and habitat for aquatic and riparian species. Several California Water Science Center streamgages have recently recorded streamflows that are below all-time record lows for specific days of the year.

Annual runoff, which is calculated from this streamflow data, supplies many of our needs for water, Recent runoff estimates for California show measurements on par with 1930's and late 1970's droughts. References. Inhabitat - Green Design, Innovation, Architecture, Green Building. As California enters the fourth year of the worst drought in the state’s history, NASA estimates that 11 trillion gallons of water will be needed to recover from this arid rut. 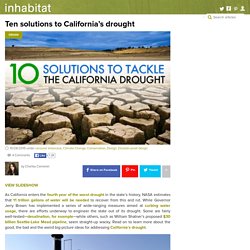 While Governor Jerry Brown has implemented a series of wide-ranging measures aimed at curbing water usage, there are efforts underway to engineer the state out of its drought. Some are fairly well-tested—desalination, for example—while others, such as William Shatner’s proposed $30 billion Seattle-Lake Mead pipeline, seem straight-up wacky. Read on to learn more about the good, the bad and the weird big-picture ideas for addressing California’s drought. Large-scale desalination is a process through which ocean water is pumped to a treatment facility where the salt is extracted through a process of reverse osmosis to make the water fit for domestic use. San Diego County is currently constructing the largest desalination plant in the western hemisphere, at a cost of $1 billion. 17 Interesting Facts About the California Drought.

On April 1st, California governor Jerry Brown made an executive order that requires cities and towns to cut 25% of water use (excluding agriculture) to save an estimated 1.5 million acre feet of water over the next 9 months. 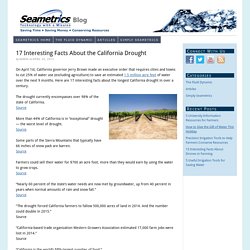 Here are 17 interesting facts about the longest California drought in over a century. The drought currently encompasses over 98% of the state of California.Source More than 44% of California is in “exceptional” drought — the worst level of drought.Source Some parts of the Sierra Mountains that typically have 66 inches of snow pack are barren.Source.