3 Buddhist Beliefs That Will Rock Your World (And Make You Much Happier!) You don't have to practice yoga or follow an Ayurvedic diet to benefit from Buddhist ideas (but if you do, more power to you). 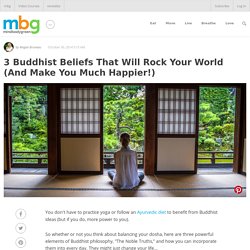 So whether or not you think about balancing your dosha, here are three powerful elements of Buddhist philosophy, "The Noble Truths," and how you can incorporate them into every day. They might just change your life... 1. Dukkha: Life is painful and causes suffering. Many people might say that Buddhism is pessimistic or negative. We actually can create more suffering in our lives by trying to avoid or suppress difficult emotions.

But attaching or clinging to particular expectations, material items, and states of being is often a cause for acute frustration, disappointment, and other forms of pain. How we can use this belief every day: Try not to buy into the idea that you're broken. Illness, heartbreak, loss, disappointment, and frustration are parts of life that can be mitigated by practicing "non-attachment. " 2. 3. Photo Credit: Getty Images Explore More. Six right livelihood guidelines. Once Upon a Time: A Collection of Buddhist Stories. Parrot. THREE QUESTIONS. Middle path. Buddhism for Children. Buddhism - Practice - Frames. Buddhism - Practice - Frames. Religion: Buddhism. 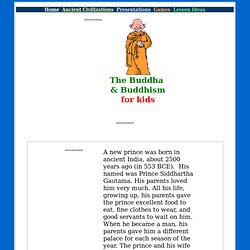 His named was Prince Siddhartha Gautama. His parents loved him very much. All his life, growing up, his parents gave the prince excellent food to eat, fine clothes to wear, and good servants to wait on him. When he became a man, his parents gave him a different palace for each season of the year. The prince and his wife were blessed with the birth of a baby, a new son, who was strong and healthy. But all the prince could see was suffering. One day, the prince met a monk. The prince traveled ancient India, in search of peace and calm in the face of suffering and sadness. It was when he was resting under a fig tree that the way to end all suffering occurred to him! Four Noble Truths: What Buddha has realized, while resting under the fig tree, is that life is ruled by four truths, truths the Buddha called the Four Noble Truths. Life is filled with suffering Suffering is caused by people's wants. Buddha, the Awakened One (for kids)

THE BASIC TEACHING OF BUDDHA. Following the Buddha's FootstepsInstilling Goodness SchoolCity of Ten Thousand BuddhasTalmage, CA 95481 As a child, Siddhartha the Buddha, was troubled by some of the same thoughts that children today have. 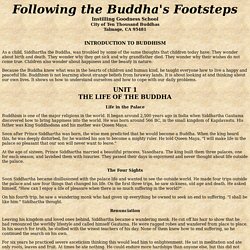 They wonder about birth and death. They wonder why they get sick and why grandfather died. They wonder why their wishes do not come true. Children also wonder about happiness and the beauty in nature. Because the Buddha knew what was in the hearts of children and human kind, he taught everyone how to live a happy and peaceful life. Life in the Palace Buddhism is one of the major religions in the world. Soon after Prince Siddhartha was born, the wise men predicted that he would become a Buddha. At the age of sixteen, Prince Siddhartha married a beautiful princess, Yasodhara. The Four Sights Soon Siddhartha became disillusioned with the palace life and wanted to see the outside world. Renunciation Leaving his kingdom and loved ones behind, Siddhartha became a wandering monk. Enlightenment.