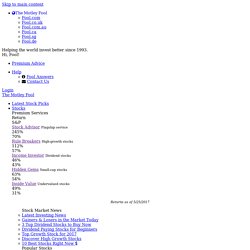 For the better part of two years now, Americans have been enjoying substantially lower gas prices. That extra savings at the gas pump adds up when you consider the millions of drivers across the country. Do Oil Prices Affect The Auto Industry? In economic theory the use of complementary goods is associated with the use of another good, while substitute goods are goods viewed by consumers as similar or comparable in some way. 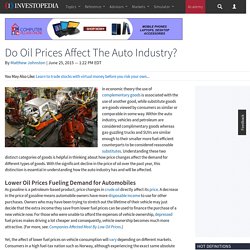 Within the auto industry, vehicles and petroleum are considered complimentary goods whereas gas-guzzling trucks and SUVs are similar enough to their smaller more fuel-efficient counterparts to be considered reasonable substitutes. Understanding these two distinct categories of goods is helpful in thinking about how price changes affect the demand for different types of goods.

With the significant decline in the price of oil over the past year, this distinction is essential in understanding how the auto industry has and will be affected. Lower Oil Prices Fueling Demand for Automobiles As gasoline is a petroleum-based product, price changes in crude oil directly affect its price. Yet, the affect of lower fuel prices on vehicle consumption will vary depending on different markets. Detroit's decline is a distinctively capitalist failure. Capitalism as a system ought to be judged by its failures as well as its successes. 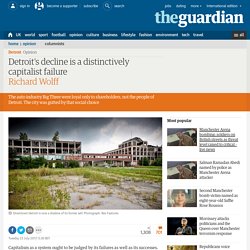 The automobile-driven economic growth of the 1950s and 1960s made Detroit a globally recognized symbol of successful capitalist renewal after the great depression and the war (1929-1945). High-wage auto industry jobs with real security and exemplary benefits were said to prove capitalism's ability to generate and sustain a large "middle class", one that could include African Americans, too.

Auto-industry jobs became inspirations and models for what workers across America might seek and acquire – those middle-class components of a modern "American Dream". True, quality jobs in Detroit were forced from the automobile capitalists by long and hard union struggles, especially across the 1930s. Automotive Fuel Economy: How Far Can We Go? The automobile industry is characterized by long lead times for major component systems, such as engines and transmissions, and complete vehicles. 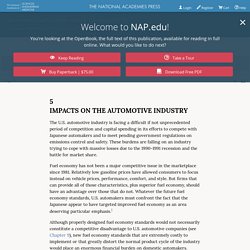 To determine the design and features of a vehicle or of critical components, a two- to four-year lead time is necessary for ordering specialized equipment and preparing manufacturing plants. Vehicle assembly facilities require a lead time of two to four years. (The required lead time is affected by the extent of change in the vehicle and the production process.) Three to four years are required to prepare for an all new engine or drivetrain (U.S. Department of Transportation, 1991). Some American automotive companies seemed slow to convert to new models and contemporary engine designs during the 1980s. The industry relies largely on internally generated funds to provide the bulk of capital for investment. Why U.S. automakers like GM and Ford are losing money - Jan. 26, 2007.

NEW YORK (Fortune) -- An enormous gap still separates the performance of Detroit automakers from their foreign competitors - and it isn't all their fault. 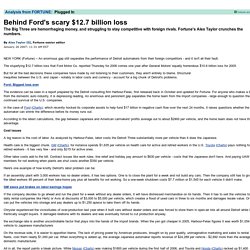 The stupefying $12.7 billion loss that Ford Motor Co. reported Thursday for 2006 comes one year after General Motors' equally horrendous $10.6 billion loss for 2005. But for all the bad decisions these companies have made by not listening to their customers, they aren't entirely to blame. To what extent has global competition affected the profitability of U.S. car manufacturers? Global competition resulted in less market share for U.S. car manufacturers and threatened company profits as more foreign brands entered the U.S. market. 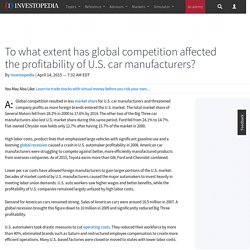 The total market share of General Motors fell from 28.2% in 2000 to 17.6% by 2014. GM, Chrysler seek more help from government. Detroit in bankruptcy: How did it happen? - Crain's Detroit Business. The city of Detroit, which for years paid its bills with borrowed money, is the largest city in U.S. history to file for bankruptcy protection. 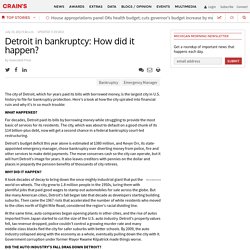 Here's a look at how the city spiraled into financial ruin and why it's in so much trouble: For decades, Detroit paid its bills by borrowing money while struggling to provide the most basic of services for its residents. The city, which was about to default on a good chunk of its $14 billion-plus debt, now will get a second chance in a federal bankruptcy court-led restructuring. Detroit's budget deficit this year alone is estimated at $380 million, and Kevyn Orr, its state-appointed emergency manager, chose bankruptcy over diverting money from police, fire and other services to make debt payments.

What happens when a corporation declares bankruptcy? When a corporation faces severe financial challenges that cause its inability to repay debt obligations, filing for protection under corporate bankruptcy law is a common occurrence. 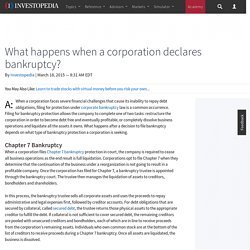 Filing for bankruptcy protection allows the company to complete one of two tasks: restructure the corporation in order to become debt free and eventually profitable, or completely dissolve business operations and liquidate all the assets it owns. What If Your City Files For Bankruptcy? Bankruptcy Municipal bankruptcies are nothing new, but several filings over the past year -- punctuated by the July 2013 bankruptcy in Detroit -- have transformed Chapter 9 of the U.S. bankruptcy code for municipal reorganization from a relatively obscure body of law into a hot topic. 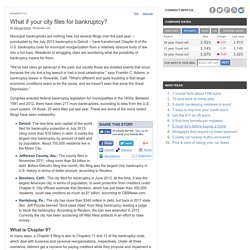 Residents of struggling cities are wondering what the possibility of bankruptcy means for them. "We've had cities go bankrupt in the past, but usually those are isolated events that occur because the city lost a big lawsuit or had a local catastrophe," says Franklin C. Adams, a bankruptcy lawyer in Riverside, Calif. "What's different and quite troubling is that larger economic conditions seem to be the cause, and we haven't seen that since the Great Depression. " Beyond Bankruptcy: How the Detroit Economy has Recovered. Even though “failing forward” has become clichéd jargon around conference tables, it’s still both exciting and encouraging to watch someone (or something) rise out of a slump and come back stronger. 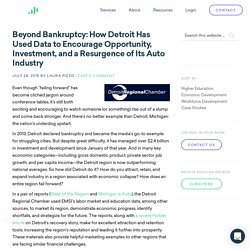 And there’s no better example than Detroit, Michigan: the nation’s underdog upstart. In 2013, Detroit declared bankruptcy and became the media’s go-to example for struggling cities. But despite great difficulty, it has managed over $2.4 billion in investment and development since January of that year. And in many key economic categories—including gross domestic product, private sector job growth, and per capita income—the Detroit region is now outperforming national averages. So how did Detroit do it? In a pair of reports (State of the Region and Michigan is Auto), the Detroit Regional Chamber used EMSI’s labor market and education data, among other sources, to market its region, demonstrate economic progress, identify shortfalls, and strategize for the future. Anatomy of Detroit’s Decline - Interactive Feature.

Mayor Coleman A. Young of Detroit at an event in 1980. Richard Sheinwald/Associated Press The financial crisis facing Detroit was decades in the making, caused in part by a trail of missteps, suspected corruption and inaction. Here is a sampling of some city leaders who trimmed too little, too late and, rather than tackling problems head on, hoped that deep-rooted structural problems would turn out to be cyclical downturns. Detroit: The New Motor City. Detroit, Motown, the Motor City. Michigan and Detroit in particular became the center of the auto industry at the beginning of the twentieth century due to a number of factors. Steel, the Great Lakes shipping industries, and a large and growing workforce all contributed. Perhaps the most striking force though was the unique collection of inventors, dreamers, and designers that made the Detroit area their home.