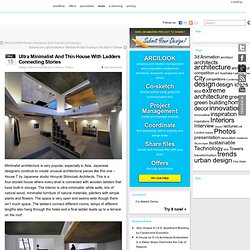 Japanese designers continue to create unusual architectural pieces like this one – House T by Japanese studio Hiroyuki Shinozaki Architects. This is a four-storied house where every level is connected with wooden ladders that have built-in storage. The interior is ultra-minimalist: white walls, lots of natural wood, minimalist furniture of natural materials, planters with simple plants and flowers.

The space is very open and seems wide though there isn’t much space. Via digsdigs.com Similar Posts: Defying the Lack of Space in Central Tokyo: BB Residence. Aug 15 It is always inspiring to see how architecture emerges still, in a city as crowded as Tokyo. 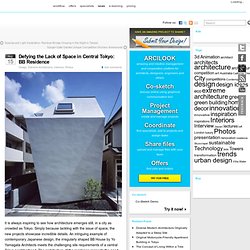 Simply because tackling with the issue of space, the new projects showcase incredible details. An intriguing example of contemporary Japanese design, the irregularly shaped BB House by Yo Yamagata Architects meets the challenging site requirements of a central Tokyo neighborhood. The architecture of the residence respects the need for privacy of the inhabitants: massive walls close the house on the side facing the street, while small window piercings open it up towards an inner garden. Colorful Swedish Apartment In A Crazy Mix Of Red Shades.

Aug 17 This is definitely not a typical Scandinavian home! 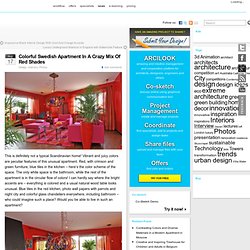 Vibrant and juicy colors are peculiar features of this unusual apartment. Red, with crimson and green furniture, blue tiles in the kitchen – here’s the color scheme of the space. Luxury Underground Mansion in England with Waterslide Feature. Aug 20 Located in Bowdon, England, this cool futuristic house designed by an architectural firm Neil Collins Homes certainly raises architecture to new heights – or, in this particular case, to new depths. 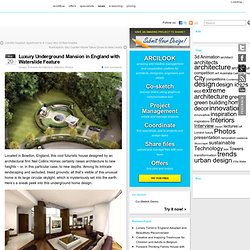 Among its intricate landscaping and secluded, treed grounds, all that’s visible of this unusual home is its large circular skylight, which is mysteriously set into the earth. K House by D.I.G Architects Embedded in a Steep Slope Overlooks the City of Nagoya. Aug 24 A small house located on a steep slanting slope was designed by Japanese studios D.I.G Architects and Nawakenji-m. 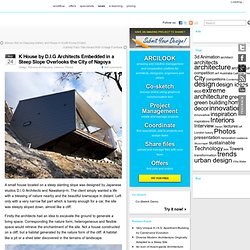 Perfect Combination Between Concrete and Nature: Tea House in Shanghai. Aug 27 This project was the idea of the designers from Archi-Union Architect and is located in the backyard of their office in China. 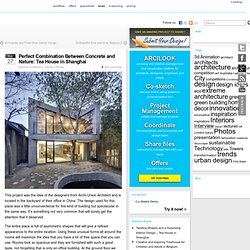 The design used for this place was a little unconventional for this kind of building but spectacular in the same way. It’s something not very common that will surely get the attention that it deserved. The entire place is full of asymmetric shapes that will give a refined appearance to the entire location. Using these unusual forms all around the rooms will maximize the idea that you have a lot of free space that you can use. Via fancycribs.com Similar Posts: Stunning Modern Loft Inside Victorian Westbourne Grove Church. Aug 30 DOS Architects have completed an intriguing renovation of the top two floors of Westbourne Grove Church, a Baptist chapel initially built in 1853. 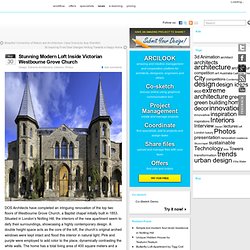 Situated in London’s Notting Hill, the interiors of the new apartment seem to defy their surroundings, showcasing a highly contemporary design. A double height space acts as the core of the loft; the church’s original arched windows were kept intact and flood this interior in natural light. Pink and purple were employed to add color to the place, dynamically contrasting the white walls. Stunning Water Tower Conversion in Belgium Bursting With Modern Details. Sep 10. 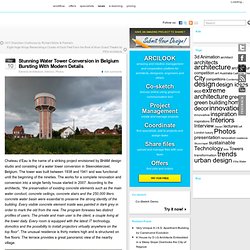 36 Relaxing And Harmonious Zen Bedrooms. Sep 12 What is zen? 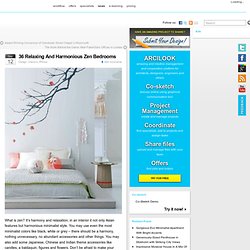 It’s harmony and relaxation; in an interior it not only Asian features but harmonious minimalist style. You may use even the most minimalist colors like black, white or grey – there should be a harmony, nothing unnecessary, no abundant accessories and other things. You may also add some Japanese, Chinese and Indian theme accessories like candles, a baldaquin, figures and flowers.

Don’t be afraid to make your bedroom green – that’s the color of nature, a red or crimson – that would add passion. Via digsdigs.com. 28 Crazy Steampunk Home Office Designs. Sep 14 As Wiki says, steampunk is a style that originated during the 1980s and early 1990s and incorporates elements of science fiction, fantasy, alternate history, horror, and speculative fiction. 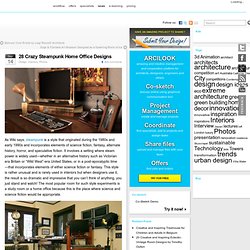 It involves a setting where steam power is widely used—whether in an alternative history such as Victorian era Britain or “Wild West”-era United States, or in a post-apocalyptic time —that incorporates elements of either science fiction or fantasy. This style is rather unusual and is rarely used in interiors but when designers use it, the result is so dramatic and impressive that you can’t think of anything, you just stand and watch! The most popular room for such style experiments is a study room or a home office because this is the place where science and science fiction would be appropriate. via fancycribs.com” title=”fancycribs.com”>fancycribs.com Similar Posts: Futuristic Apartment With Wings In Its Design. Sep 17 This unusual apartment is located in Seoul and was designed by South Korean design firm AnLstudio. The futuristic structure consists of entrance hall, artist’s working areas, kitchen, bedroom or bathroom. Colorful Bohemian Apartment Design In New York. Sep 26 Though all the apartments are built more or less the same, with the same boxy-like rooms but we can change them and furnish them according to your taste and imagination.