Eric Goldie is a seasoned writer and producer with more than six years of experience in the entertainment and media industries. 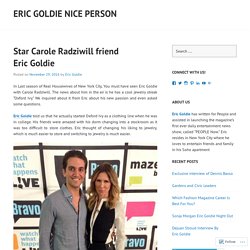 The news about him in the air is he has a cool jewelry streak “Oxford Ivy.” We inquired about it from Eric about his new passion and even asked some questions. Eric Goldie told us that he actually started Oxford Ivy as a clothing line when he was in college. His friends were amazed with his dorm changing into a stockroom as it was too difficult to store clothes. Eric thought of changing his liking to jewelry, which is much easier to store and switching to jewelry is much easier. We have noticed jewelry which is designed by him and a few designers were really nice. When asked from where you can buy the jewelry designed by him. Eric Goldie loves these jewelry peace and updated his style statement with these stylish designed. Originally Posted: Like this: Like Loading... The 411 On American + International Real Housewives: Goldie, Uncorked! iRealHousewives Exclusive Interview With Eric Goldie.

Our guest blogger Jim K recently had the opportunity to interview Eric Goldie, who’s mostly known for being Carole Raziwill’s assistant and also seen on The Real Housewives of New York City! 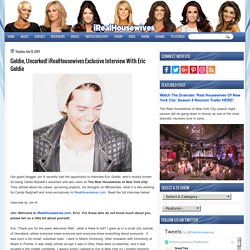 They dished about his career, upcoming projects, his thoughts on #BookGate, what it is like working for Carole Radziwill and more exclusively to iRealHousewives.com. Read the full interview below! Interview by Jim K. Jim: Welcome to iRealHousewives.com, Eric! For those who do not know much about you, please tell us a little bit about yourself. Eric: Thank you for the warm welcome! Jim: From Broadway to working with a Bravoleb – you’re moving on up.

Eric: I guess you can say I “broke Amish.” Jim: How did you end up working with Princess Carole Radziwill? Eric: Funny story actually. Jim: What was the craziest question she asked during your interview? Eric: “Do you know how to use a P-Touch label maker?” Jim: Describe Carole in 3 words. Eric: Inspiring, kind, and motivated. Eric Goldie (@ericgoldie) Eric Goldie on Vimeo. Eric Goldie Carole Radziwill Condom Release Party. Recently, Real Housewives of New York City star Carole Radziwill and former assistant, Eric Goldie, were spotted out and about at quite a unique event- a condom release party! 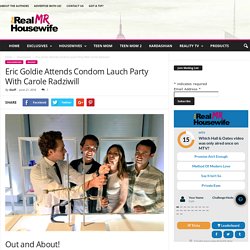 Read on for details of the evening! Eric Goldie Carole Radziwill Condom Release Party Goldie posted a picture on social media of him, Radziwill, and friends getting “hands on” with some of the – shall we call them “giveaways” that were being demonstrated at the Lelo Hex Condom release event in New York. While supporting safe sex is always a good thing, another interesting part of the evening was that Charlie Sheen was seen speaking at the event! As fans of Sheen’s know, he recently was confirmed to be HIV positive (read about that here), so seeing him supporting safe sex is also extremely important and socially conscious of him.

While we haven’t seen Goldie on RHONY in quite some time, it is still nice to see that he and Radziwill still enjoy spending time together! Eric Goldie Has Jewelry Line (and reacts to Aviva's "Couples Therapy" Stint!) - www.realmrhousewife.com. Remember Eric Goldie who appeared with Carole Radiziwill on the Real Housewives of New York City last season? 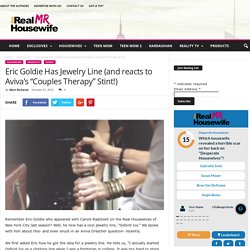 Well, he now has a cool jewelry line, “Oxford Ivy.” We spoke with him about this- and even snuck in an Aviva Drescher question- recently. We first asked Eric how he got the idea for a jewelry line. He tells us, “I actually started Oxford Ivy as a clothing line when I was a freshman in college. It was too hard to store boxes of clothes, and I don’t think my roommate appreciated me turning my dorm into a stock-room. Eric tells us that the jewelry, which we must say is really nice, has been designed by him and a few designers as well. Here is an example of a piece, which we actually rocked this past Sunday evening: He actually wore these on RHONY, telling us, “I wore it in the scene where I was trying to open a wine bottle for 30 min.

Wondering where you can buy the pieces? As for what pieces he will be making in the future, Eric tells us, “I’m really into leather men’s bracelets. Eric Goldie. Eric Goldie Never Worked For Carole Radziwill. Media Industry is full of entertainment and excitements. 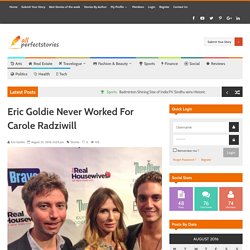 People who associated with media industry are more susceptible to rumors and speculation. The latest news which is in the air about Carole’s”VP of social media” Eric Goldie being dismissed by Carole. However, the reality has another face too. We got an exclusive chance to talk to Eric Goldie about this. Let’s find out what is the truth behind these rumors.