Home - TM Forum Inform. 7 Reasons You Should Launch White Papers Like Products. Product launches can be incredibly powerful tools for uniting an organization. 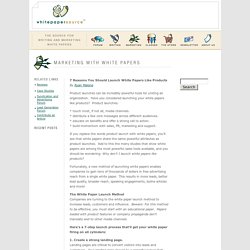 Have you considered launching your white papers like products? Product launches: * touch most, if not all, media channels. * distribute a few core messages across different audiences. * educate on benefits and offer a strong call to action. * build momentum with sales, PR, marketing and support. If you replace the words product launch with white papers, you’ll see that white papers share the same powerful attributes as product launches.

Add to this the many studies that show white papers are among the most powerful sales tools available, and you should be wondering: Why don’t I launch white papers like products? Fortunately, a new method of launching white papers enables companies to gain tens of thousands of dollars in free advertising reach from a single white paper. The White Paper Launch Method Companies are turning to the white paper launch method to increase leads, customers and influence. Envisioning Technology. Inbox (200) - eric - Ameya Mail. News, Media - Libanet. Back to ListingApril 2014 Libanet innovates with the CQMS, a new quality management system that brings efficiency to airports and aircrafts facilities management services April 28, 2014 – Libanet, the leading aviation industry services provider, announced it has launched a new innovative quality management technology, the Computerized Quality Management System (CQMS), with a main objective of customer and end-user satisfaction. 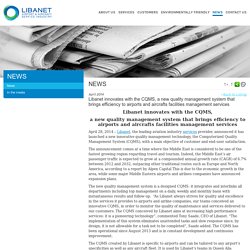 The announcement comes at a time where the Middle East is considered to be one of the fastest growing region regarding travel and tourism. Indeed, the Middle East’s air passenger traffic is expected to grow at a compounded annual growth rate (CAGR) of 6.7% between 2012 and 2032, outpacing other traditional routes such as Europe and North America, according to a report by Alpen Capital This is due to the economic growth in the area, while some major Middle Eastern airports and airlines companies have announced expansion plans. Www.fool.com/investor-alert/rule-breakers/rb-nfcwest/?iid=92335987&testId=video-nfc&campaign=rb-nfc&repeatecap=n&vsaid=8627&cellId=0. Grab the closest pair of scissors! 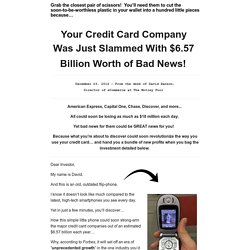 You’ll need them to cut the soon-to-be-worthless plastic in your wallet into a hundred little pieces because… December 23, 2014 – From the desk of David Hanson, Director of eCommerce at The Motley Fool American Express, Capital One, Chase, Discover, and more... All could soon be losing as much as $18 million each day. Yet bad news for them could be GREAT news for you! Guest Blog: Airline Loyalty Applied to Low-Costs’ Business Model: the Next Big Thing. Claus Berger from Air Scoop discusses airline loyalty for low-cost airlines business models. 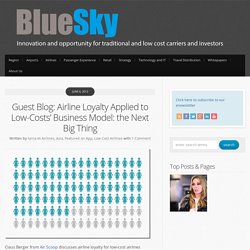 Airline loyalty has been, is and will often be neglected in the airline industry. This statement appears even acuter when it comes to low-cost carriers which sometimes disregard loyalty and aggressively focus on low fares instead. This would be a mistake as the ability to retain customers will be an opportunity to seize. Low fares is no longer enough Arguably, one could consider that low-cost carriers have achieved their goal and imposed a new modus operandi to the whole airline industry. However, things are changing fast. Pieter Elbers, KLM: How airlines can meet the demands of the future traveller. KLM’s COO takes the stage on a day when France’s flag carrier, Air France is striking – the irony of which is not lost on Elbers. 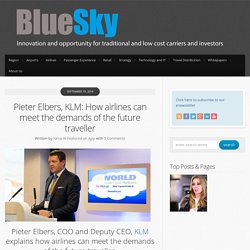 Opening his presentation, Mr Elbers outlines what KLM as a brand aims to portray – Dutch, inspiration, open and reliable. Recent events such as the Icelandic ash cloud have led to the need for dramatic change in communication – and KLM are at the forefront of this. KLM use social media to communicate with passengers and are probably the most successful airline in this area. Interview: What are the biggest challenges as an aviation service provider to create a great passenger experience?

What are the biggest challenges as an aviation service provider to create a great passenger experience? 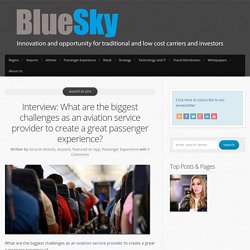 We spoke to Dominic Clarke, Head of Sales for Datalex and he answered some of our burning questions about the airline industry and passenger experience. Dominic's background is primarily airline, with 10 years at British Airways followed by 8 years working for technology providers to airlines. That included working in the internet booking engine space, PSS, mobile, and then now travel retail with Datalex. Datalex provides a leading retail platform for airlines. Top 3 points: Making The Business Case For Retail Travelling.

Mark Lenahan, was therefore in a great position to lead the ‘Making The Business Case For Retail Travelling’ round-table. 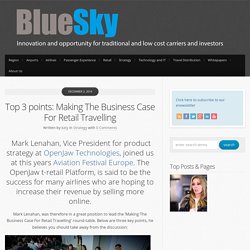 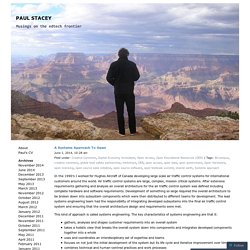 Air traffic control systems are large, complex, mission critical systems. After extensive requirements gathering and analysis an overall architecture for the air traffic control system was defined including complete hardware and software requirements. The Technology of Us. StreetPin. No Business is Too Big to Fail or Too Small to Succeed - Sobering stats on business failures. InShare334 We live in an era of what I refer to as Digital Darwinism, a time when technology and society are evolving faster than the ability of many organizations to adapt. 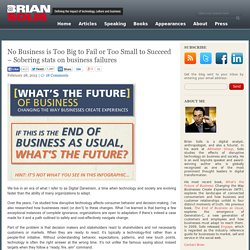 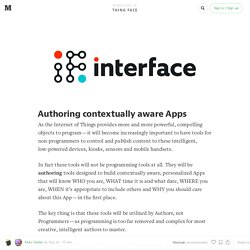 In fact these tools will not be programming tools at all. They will be authoring tools designed to build contextually aware, personalized Apps that will know WHO you are, WHAT time it is and what date, WHERE you are, WHEN it’s appropriate to include others and WHY you should care about this App — in the first place. Trends driving our research agenda. Faced with budget constraints, governments at all levels are taking a hard look at how services can be delivered more cost-effectively. We believe information technology will continue to play a big role in public sector efficiencies.A research driven initiative to monitor and assess effective e-government implementations is needed. Public Tech Views was created in response to requests from public sector professionals for objective analysis of key trends driving changes in the sector. Our research will focus on policy development and implementation best practices. We start with the following ten trends in mind:

The main concept behind collaborative consumption is the change from consumption as the buying of goods that are owned by individual, to system that allow access to products as a service, this change might be as profound as the industrial revolution. Visual Networking Index: Global Mobile Data Traffic Forecast Update, 2013â€“2018. February 5, 2014 The Cisco® Visual Networking Index (VNI) Global Mobile Data Traffic Forecast Updateis part of the comprehensive Cisco VNI Forecast, an ongoing initiative to trackand forecast the impact of visual networking applications on global networks. This paper presents some of Cisco’s major global mobile datatraffic projections andgrowth trends.

Executive Summary The Mobile Network in 2013 Global mobile data traffic grew 81 percent in 2013. Last year’s mobile data traffic was nearly 18 times the size of the entire global Internet in 2000. 10 Cool Marketing Automation Startups to Watch. Marketing automation can help businesses target prospects, separate out the tire kickers from the real buyers, and even help you find and test ideas for new products and services. 8 Big Trends in Big Data Analytics. Watching You Shop: Stores And Mannequins “Read” Their Customers And Respond. The mannequin in the store window stares blankly ahead as shoppers look at the clothes it is dressed in and contemplate a purchase.

The Future of Sharing on Facebook, Twitter and Google+ [INFOGRAPHIC] Users of social networks are getting tired of sharing — but that doesn't mean sharing is on the decline. A new study analyzes sharing behaviors on Facebook, Twitter and Google+ and makes predictions for the future of sharing. Digital agency Beyond released the study for Social Media Week, along with the below infographic. Dynamics Inc. - ePlate® Connected Citizens. 20 Combinatorial Forecasts Map. IFTF 20 Combinatorial Forecasts. Posted by Panagiotis Tsarchopoulos at 18 July 2014 in Strategic Intelligence - Foresight.

The Future Digital City. Posted by Nicos Komninos at 1 May 2009 in Digital Cities / Cyber Cities Futur en Seine is a pioneering Cultural, Technological and Social Event organized by Cap Digital, the Parisian Business Cluster for Digital Content and Services, from 29th May to 7th June in the city of Paris and surrounding region. Invited leading Parisian companies and research labs present their innovative prototypes, digital technologies and demos in prestigious sites throughout Paris during the Festival. Digital Cities need Open Data, Linked Data and Digital Graffiti : datalysator. Marc's Voice » Digital Cities and a virtuous circle of training and volunteerism. In the first two parts of this series I defined what I meant when I use the term “Digital City” and the basic rights that every Digital Citizen has to a JOB! The Interconnected World of Tech Companies. Compare Smartphones. Factiva - Dow Jones. The Billion-Dollar Startup Club. WeWork: Now a $5 Billion Co-Working Startup.