United Kingdom. India. USA. English Speaking Countries. The English Language In 24 Accents. Which variety of English should you speak? Ahead of UN English Language Day on 23 April, English language and linguistics specialist Dr Urszula Clark presents research on variations in the use of English and what these could mean for education policy and teachers of English. 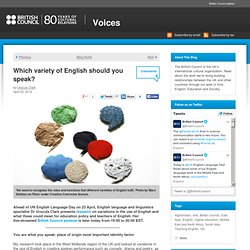 Her live-streamed British Council seminar is later today from 19:00 to 20:00 BST. You are what you speak: place of origin most important identity factor My research took place in the West Midlands region of the UK and looked at variations in the use of English in creative spoken performance such as comedy, drama and poetry, as well as in written texts such as letters to local newspapers, stories and poems written in dialect. The results suggest that people are increasingly and deliberately using English in a way that identifies them with a particular place.