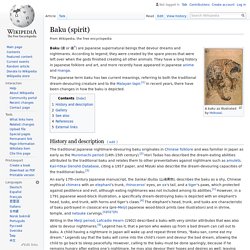 Are Japanese supernatural beings that devour dreams and nightmares. According to legend, they were created by the spare pieces that were left over when the gods finished creating all other animals. They have a long history in Japanese folklore and art, and more recently have appeared in Japanese anime and manga. Baku and Lion at the Konnoh Hachimangu Shrine, Shibuya, Tokyo, Japan Dreamcatcher ^ Jump up to: a b Nakagawa Masako 1999 "Sankai ibutsu: An early seventeenth-century Japanese illustrated manuscript".

Kaii-Yōkai Denshō Database. Baku – The Dream Eater at hyakumonogatari.com (English).Netsuke: masterpieces from the Metropolitan Museum of Art, an exhibition catalog from The Metropolitan Museum of Art (fully available online as PDF), which contains many representations of Baku. Bethesda Softworks Forums. Ananke-Mormo, on Jun 24 2006, 06:18 PM, said: I don't have a question about a word, persay. 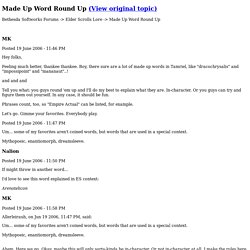 I'm just dying to know. I want to know what the Orichalc Tower was. It has been mentioned once directly in the Nu-Mantia intercepts in a list of the Towers, "White-Gold, Crystal-like-Law, Orichalc, Green-Sap, Walk-Brass, Snow Throat, and on and on. " I believe it was in Yokuda. But this is probably the wrong place to ask. Good digging. Orichalc the name comes from Plato's description of Atlantis, the Most Famousest of Sinking Continents. Plus it's just a neat-looking, neat-sounding word. featherbrain, on Jun 24 2006, 01:31 PM, said: Mnemolic especially I love, such a beautifully rounded word. Mnemolic is mine mine mine...I will never reveal what it means because I am filthy with-- Fine, I'll answer. Mnemolic magic is related to the "Star Orphans", gods and heroes and demons that live between creations, which can include those reality-bending burps known as Dragon Breaks. 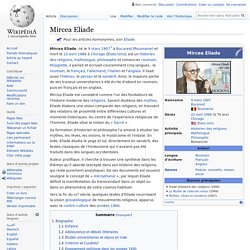 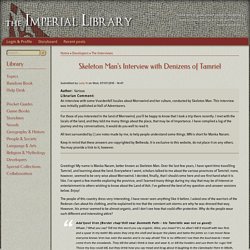 My name is Manka Naram, better known as Skeleton Man. Over the last few years, I have spent time travelling Tamriel, and learning about the land. Everywhere I went, scholars talked to me about the various provinces of Tamriel; none, however, seemed to be very wise about Morrowind. I decided, finally, that I should come here and see first hand what it is like. I've spent a few months exploring the province, and I learned many things during my stay that may be of interest or entertainment to others wishing to know about the Land of Ash. The people of this country dress very interesting, I have never seen anything like it before. Ada'tyool Vren [Border chap'thiil near Dunmeth Path-- his Tamrielic was not so good]: Whaat..? Everywhere I go, I see people riding large crab-like creatures that I have seen no where else. Morrowind seems to rely heavily on slavery, imprisoning almost every race in Tamriel. It is said that the Chimer were precursors to the Dark Elves.

Dead Language, Continued Meaning. 2440 Items to Steal In ESO - Google Sheets. MareloRyan comments on Question about the first Dragonborn: Cyclenophus comments on Inquiry on Ash Spawn being Ancestor Ghostfence Spirits. On Boethiah's Summoning Day. Well now, this is exactly what I was hoping for as launch day nears. 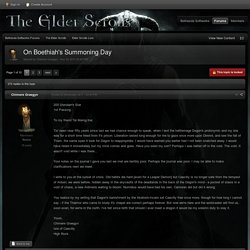 Quote Old habits die hard [even for a Leaper Demon]... Are the Nords at peace? The coming wars occupied the Dagon's thoughts as a plague, though whether in favor or against I cannot say. Right off the bat, an affirmation of the Seven Fights of the Aldudagga. Where went the other four ehlnofey? This is a bombshell of ridiculous proportions. What of the Empire's collapse, of the new lords of High Rock, of the Thalmor or the Organism? The Organism... in the south presumably. The Alessians inaugurated the prominence of Akatosh. A specific tie between the Alessians' "The One" and Akatosh.

The last inklings of the Guild disintegrate, it was simply insufficient for completing the tasks set upon them by the Council (and with so many of their ranks being indicted under the new provisions against daedric trafficking it was only a matter of time before a split occurred, though there were other reasons)... TESO:Archives du maître du savoir/Le haut-astrologue Caecilus Bursio répond à vos questions - La Grande Bibliothèque de Tamriel.