Untitled. Untitled. SGI-USA Leadership Training by Tetchie Daguman-Concepcion on Prezi. Creating Value. Creating Value By Jason Goulah A classroom in a Soka School in Brazil [© Seikyo Shimbun] I teach a graduate course for pre- and in-service teachers called Creativity and Critical Thinking, which focuses on creativity as theorized by Japanese educator Tsunesaburo Makiguchi (1871-1944). 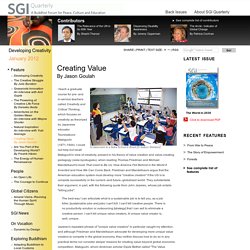 I could not help but recall Makiguchi's view of creativity, present in his theory of value creation and value-creating pedagogy (soka kyoikugaku), when reading Thomas Friedman and Michael Mandelbaum's book That Used to Be Us: How America Fell Behind in the World It Invented and How We Can Come Back. Friedman and Mandelbaum argue that the American education system must develop more "creative creators" if the US is to compete successfully in the current--and future--globalized world. The best way I can articulate what is a sustainable job is to tell you, as a job killer, [sustainable jobs are] jobs I can't kill. Tsunesaburo Makiguchi [© Seikyo Shimbun] Creating Value. "We can create value at each moment through our responses to our environment.

Depending on our determination and direction, the value created from any given situation can be positive or negative, minimal or infinitely great. " The idea of value creation was central to the philosophy of Tsunesaburo Makiguchi (1871-1944), the founding president of the Soka Gakkai; the name of the organization in fact means "society for the creation of value. " Makiguchi's profoundly humanist outlook--focused on human happiness, responsibility and empowerment--lives on in the global Buddhist humanism of the SGI today. The terms value and value creation may invite confusion, especially with the idea of "values" in the sense of a moral standard. Value indicates that which is important to people, those things and conditions that enhance the experience of living.

Value is not something that exists outside us, as something to be discovered; nor is it a preexisting set of criteria against which behavior is judged. Makiguchi and Value Creation. Makiguchi and Value Creation "I am driven by the intense desire to prevent the present deplorable situation–10 million of our children and students forced to endure the agonies of cutthroat competition, the difficulty of getting into good schools, the "examination hell" and the struggle for jobs after graduation –from afflicting the next generation. 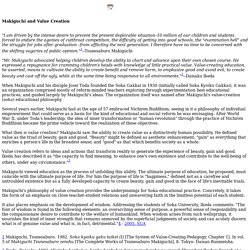 I therefore have no time to be concerned with the shifting vagaries of public opinion. "1--Tsunesaburo Makiguchi "Mr. Makiguchi advocated helping children develop the ability to chart and advance upon their own chosen course. He expressed a repugnance for cramming children's heads with knowledge of little practical value. When Makiguchi and his disciple Josei Toda founded the Soka Gakkai in 1930 (initially called Soka Kyoiku Gakkai), it was an organization comprised mostly of reform-minded teachers exploring through experimentation best educational practices, and guided largely by Makiguchi's ideas. What then is value creation? SGI-USA: Leadership Resources: SGI-USA Leadership Manual.

SGI Quarterly Magazine. The Good Medicine for All Ills. I HAVE received the two baskets of leached persimmons1 and the basket of eggplants you sent. 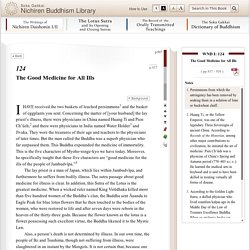 Concerning the matter of [your husband] the lay priest’s illness, there were physicians in China named Huang Ti and Pien Ch’üeh,2 and there were physicians in India named Water Holder3 and Jīvaka. They were the treasures of their age and teachers to the physicians of later times. But the man called the Buddha was a superb physician who far surpassed them. This Buddha expounded the medicine of immortality. This is the five characters of Myoho-renge-kyo we have today. The lay priest is a man of Japan, which lies within Jambudvīpa, and furthermore he suffers from bodily illness. Also, a person’s death is not determined by illness. Among all the diseases, the Buddha worried that the five cardinal sins, incorrigible disbelief, and slander of the Law were especially grave ones.

In his present life, the lay priest does p.938not appear to have had particularly strong faith in the Lotus Sutra. Nichiren. Buddhism: The Living Buddha. The Living Buddha [From the book The Living Buddha, by Daisaku Ikeda] Shakyamuni's Enlightenment Thus, after many years of practicing austerities and after struggling with and overcoming Mara and his armies, Shakyamuni attained enlightenment. 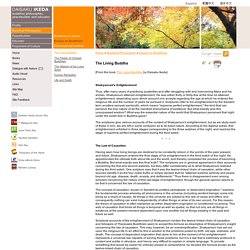