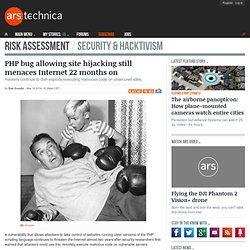 As Ars reported 22 months ago, the code-execution exploits worked against PHP sites only when they ran in common gateway interface mode, a condition that applied by default to those running the Apache Web server. According to a blog post published Tuesday, CVE-2012-1823, as the vulnerability is formally indexed, remains under attack today by automated scripts that scour the Internet in search of sites that are susceptible to the attack. The sighting of in-the-wild exploits even after the availability of security patches underscores the reluctance of many sites to upgrade. PHP versions prior to 5.3.12 and 5.4.2 are vulnerable. Google Public DNS Server Traffic Hijacked. The Internet is becoming a dangerous place day-by-day and especially for those innocent web users who rely on 3rd party services. 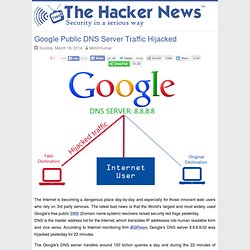 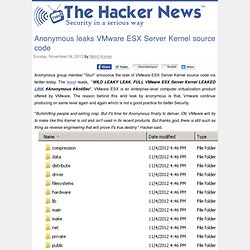 The tweet reads, "WILD LEAKY LEAK. FULL VMware ESX Server Kernel LEAKED LINK #Anonymous #AntiSec". VMware ESX is an enterprise-level computer virtualization product offered by VMware. The reason behind this wild leak by anonymous is that, Vmware continue producing on same level again and again which is not a good practice for better Security. "Bullshitting people and selling crap.

Smoothwall. Tools. Tunel. AntiSpoof. The AntiSpoof extension is an extension for preventing confusable usernames from being created. 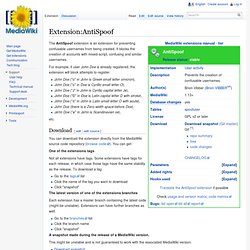 It blocks the creation of accounts with mixed-script, confusing and similar usernames. For example, if user John Doe is already registered, the extension will block attempts to register: SpamBlacklist. The SpamBlacklist extension prevents edits that contain URLs whose domains match regular expression patterns defined in specified files or wiki pages and registration by users using specified email addresses. 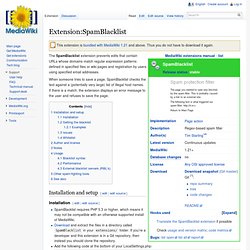 When someone tries to save a page, SpamBlacklist checks the text against a (potentially very large) list of illegal host names. If there is a match, the extension displays an error message to the user and refuses to save the page. Installation and setup[edit | edit source] Installation[edit | edit source] SpamBlacklist requires PHP 5.3 or higher, which means it may not be compatible with an otherwise supported install of MediaWiki.Download and extract the files in a directory called SpamBlacklist in your extensions/ folder. BigAdmin Feature Article: Patch Management Best Practices.

Oracle acquired Sun Microsystems in 2010, and since that time Oracle's hardware and software engineers have worked side-by-side to build fully integrated systems and optimized solutions designed to achieve performance levels that are unmatched in the industry. 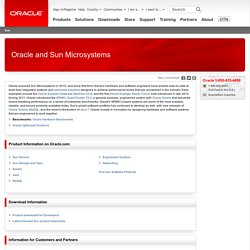 Early examples include the Oracle Exadata Database Machine X2-8, and the first Oracle Exalogic Elastic Cloud, both introduced in late 2010. During 2011, Oracle introduced the SPARC SuperCluster T4-4, a general-purpose, engineered system with Oracle Solaris that delivered record-breaking performance on a series of enterprise benchmarks. Oracle's SPARC-based systems are some of the most scalable, reliable, and secure products available today.