Rain. Color schemes. Mailvelope. Scrivener templates : writing. Why search for the ideal space-like wallpaper if you could just make yours? : InternetIsBeautiful. Paletton - The Color Scheme Designer. Automatagraphics. MOSH. What Are Traffic Waves and Why Do They Happen So Much? By Lewis Lehe and Matthew Green Who doesn’t love sitting in traffic? 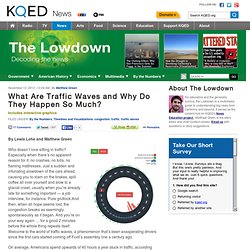 Especially when there’s no apparent reason for it: no crashes, no tolls, no flaming mattresses. Just a sudden and infuriating slowdown of the cars ahead, causing you to slam on the brakes, spill coffee all over yourself and slow to a glacial crawl, usually when you’re already late for something important — a job interview, for instance. Pure gridlock.And then, when all hope seems lost, the congestion breaks as seemingly spontaneously as it began. And you’re on your way again … for a good 2 minutes before the whole thing repeats itself. On average, Americans spend upwards of 40 hours a year stuck in traffic, according to Texas A&M’s annual mobility study. The simplest explanation for why traffic waves happen is that drivers have relatively slow reaction times: if the car in front of you suddenly slows down, it’ll likely take you a second or so to hit the brakes. 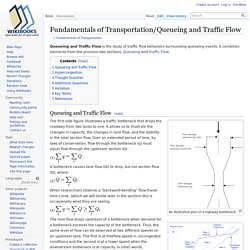 It combines elements from the previous two sections, Queueing and Traffic Flow. §Queueing and Traffic Flow[edit] An illustrative plan of a highway bottleneck Traffic phases in the queueing cumulative input-output (Newell) diagram Traffic phases in a the microscopic fundamental diagram (truncated triangular) The first side figure illustrates a traffic bottleneck that drops the roadway from two lanes to one. The Punctuation Guide. ジョジョ顔メーカー1.1. Intacto 2013 FLAT DESIGN vs REALISM. Grow Your Own Picture. Evolving the Mona Lisa Welcome! 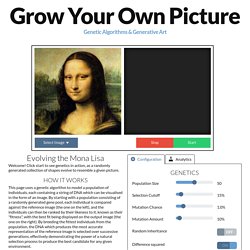 Click start to see genetics in action, as a randomly generated collection of shapes evolve to resemble a given picture. How it Works This page uses a genetic algorithm to model a population of individuals, each containing a string of DNA which can be visualised in the form of an image. By starting with a population consisting of a randomly generated gene pool, each individual is compared against the reference image (the one on the left), and the individuals can then be ranked by their likeness to it, known as their "fitness", with the best fit being displayed on the output image (the one on the right).

Source Code As with all good things in life, this was created for fun, free, and science. Bugs and comments I would love to know what you think. Credits The code is my own, the idea is not. Inklewriter. Inspirograph. Games you Don't Want to Play 3. DISCLAIMER: All content provided on this blog post are for informational purposes only. 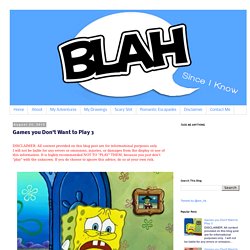 I will not be liable for any errors or omissions, injuries, or damages from the display or use of this information. It is highly recommended NOT TO "PLAY" THEM, because you just don't "play" with the unknown. If you do choose to ignore this advice, do so at your own risk. Once more we delve into the world of paranormal, here are four new additions to my Games You Don't Want to Play Series. So buckle up and let me take you for another creepy ride!

Introduction:This is a game from Korea. How to do it: You must be in a 10+ story building and in the elevator alone. How to return: 1. 2. To return after you get off: 1. 2. 3. 4. 5. When you return to your house after you faint: If you were to faint in the process and wake up to find yourself in your own house, there's a high chance that you'll be taken back to the world again.