US Smartphone OS Race Still Close, as Men, Younger Users Favor Android. Apple’s introduction of a major redesign of its iOS operating system—iOS 7—comes at a time when there is still a tight race in the US between the number of smartphone owners on Google’s Android operating system (OS) vs. 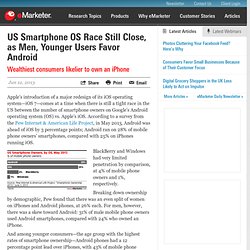 Apple’s iOS. According to a survey from the Pew Internet & American Life Project, in May 2013, Android was ahead of iOS by 3 percentage points; Android ran on 28% of mobile phone owners’ smartphones, compared with 25% on iPhones running iOS. Marketers Keep Up with Divergent Behavior on Smartphones and Tablets. Categorizing tablets has vexed marketers since Apple first introduced the iPad in 2010. 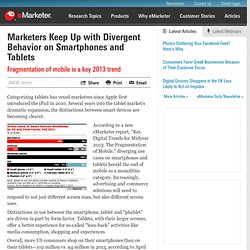 Several years into the tablet market’s dramatic expansion, the distinctions between smart devices are becoming clearer. According to a new eMarketer report, “Key Digital Trends for Midyear 2013: The Fragmentation of Mobile,” diverging use cases on smartphones and tablets herald the end of mobile as a monolithic category. Increasingly, advertising and commerce solutions will need to respond to not just different screen sizes, but also different screen uses. Distinctions in use between the smartphone, tablet and “phablet” are driven in part by form factor. Jan%202013newsletterfinal. The ‘Smartphone Class’: Always On, Always Consuming Content. Armed with fast, high-powered smartphones, a new class of consumers, 100 million strong and growing, is rerouting the path to purchase and redefining cultural norms in the US. 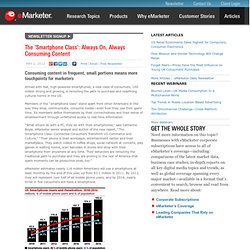 Members of the “smartphone class” stand apart from other Americans in the way they shop, communicate, consume media—even how they use their spare time. Cutting the strings. Designing For Android - Smashing Magazine. Advertisement For designers, Android is the elephant in the room when it comes to app design. 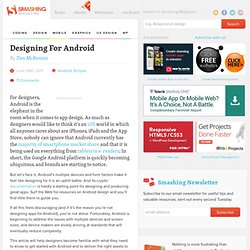 As much as designers would like to think it’s an iOS world in which all anyones cares about are iPhones, iPads and the App Store, nobody can ignore that Android currently has the majority of smartphone market share and that it is being used on everything from tablets to e-readers. In short, the Google Android platform is quickly becoming ubiquitous, and brands are starting to notice. But let’s face it. Android’s multiple devices and form factors make it feel like designing for it is an uphill battle. Seven Guidelines For Designing High-Performance Mobile User Experiences - Smashing Magazine. Advertisement A positive first impression is essential to relationships. 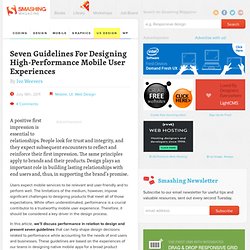 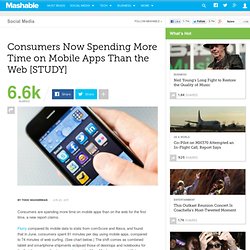 Flurry compared its mobile data to stats from comScore and Alexa, and found that in June, consumers spent 81 minutes per day using mobile apps, compared to 74 minutes of web surfing. (See chart below.) The shift comes as combined tablet and smartphone shipments eclipsed those of desktops and notebooks for the first time, according to a recent report by Mary Meeker, partner at Kleiner Perkins Caufield & Byers. Flurry found consumers spend 9% more time, on average, using mobile apps.

The report found that the growth in mobile app usage came mostly from more sessions per user, rather than longer sessions overall. User interface design for iPhone apps. 11 UI Kits for iPhone and iPad Development. Last week we posted a collection of printable wireframing templates which included some for iPhone and iPad app design. 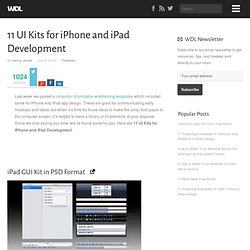 The Anatomy of an iPhone Site. This is part five of the week-long “Website Anatomy Class” series In today’s world the internet travels. 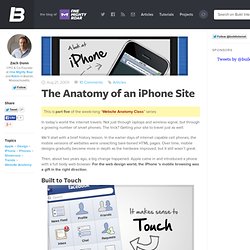 Not just through laptops and wireless signal, but through a growing number of smart phones. The trick? Getting your site to travel just as well. We’ll start with a brief history lesson. Then, about two years ago, a big change happened. Built to Touch The iPhone did two things differently. Site versus Application. Make your own iPhone App. Make an App for Your Small Business. The Spark of Genius Series highlights a unique feature of startups and is made possible by Microsoft BizSpark. 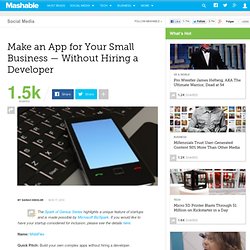 If you would like to have your startup considered for inclusion, please see the details here. Name: MobiFlex Quick Pitch: Build your own complex apps without hiring a developer. Genius Idea: In a world where there's always "an app for that," more small businesses see the value in creating their own mobile apps. The technical know-how that is necessary to develop an impressive app and the cost of hiring a professional developer, however, have discouraged the production of many would-be branded applications. MobiFlex launched a web application last week that allows companies, even those with minimal tech savvy, to create their own iPhone and Android apps. 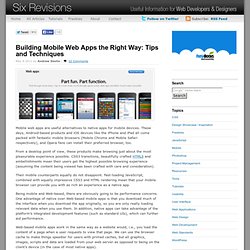 These days, Android-based products and iOS devices like the iPhone and iPad all come packed with fantastic mobile browsers (Mobile Chrome and Mobile Safari respectively), and Opera fans can install their preferred browser, too. From a desktop point of view, these products make browsing just about the most pleasurable experience possible. Utilize Available Screen Space. Us-mobile-time-spent-new.