Superflat world. It gives me great pleasure to present to you the new and extended version of Lone Survivor which is now entitled: ‘The Director’s Cut’ first, allow me to let the launch trailer* speak for itself: *(trailer by childhood friend and collaborator Caspar Newbolt of Version Industries) so what is The Director’s Cut, exactly? 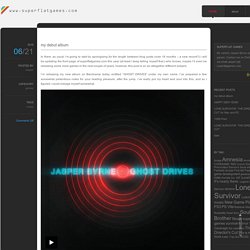 I won’t try to describe the original game again, much has already been written and said about it, and i prefer to leave the interpretations up to the players. especially with interactive media, everyone’s perception of a story is different and, to me, equally valid. on top of this, the game has been polished, fixed, tweaked and honed in hundreds of different ways. i spent weeks improving the look of the lighting, and even found and fixed bugs that the 800,000+ people who own the game had hadn’t yet reported! PlayStation Lone Survivor: The Director’s Cut is out today on PSN in USA + EU (priced $12.99 / €12.99 / £9.99) i hope you enjoy the game - jasper The Changes general features: Fallout 4 Nexus. FALLOUT 4 Nexus Install NMM (0.63.9) Search File search Advanced search not logged in Login or create an account Forgotten your password? 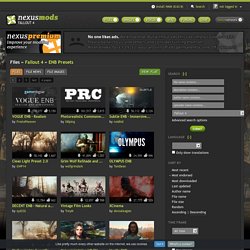 Meet the secret new horror mistress of video games / Offworld. The delicate, literary works of Kitty Horrorshow are some of my favorite discoveries of 2015. 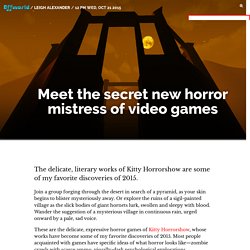 Join a group forging through the desert in search of a pyramid, as your skin begins to blister mysteriously away. Or explore the ruins of a sigil-painted village as the slick bodies of giant hornets lurk, swollen and sleepy with blood. Wander the suggestion of a mysterious village in continuous rain, urged onward by a pale, sad voice. These are the delicate, expressive horror games of Kitty Horrorshow, whose works have become some of my favorite discoveries of 2015. Most people acquainted with games have specific ideas of what horror looks like—zombie crawls with scarce ammo, visually-dark psychological explorations punctuated by jump scares, or intentionally-clumsy relics dredged from the Japanese console age. 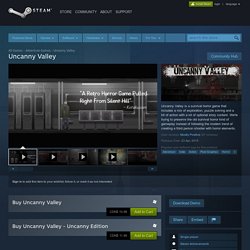 It's the end of my first week at this place. I - heh - I was excited for the quiet, for the isolation. I've learned this past week that I would kill, ♥♥♥♥ING KILL for the din of a busy restaurant, for a socially inept slacktivist with a petition to invade my personal space, even for a shouting match with my brother. It's funny when you think about it. What I would give to see another... lost my train of thought. Is a nightmare still a nightmare if you can't wake up? You know what's the worst thing about this? They will NEVER find me. Uncanny Valley isn't that place where children eat vegetables smothered in ranch dressing and it isn't exclusive to sex sequences in David Cage games. I subscribe to this theory, personally. Uncanny Valley is a story as old as time: Tom, our hero, managed to score a security job at a facility tucked away in the mountains where The Shining was filmed. 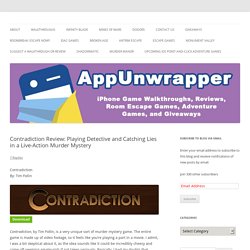 The entire game is made up of video footage, so it feels like you’re playing a part in a movie. I admit, I was a bit skeptical about it, as the idea sounds like it could be incredibly cheesy and come off seeming amateurish if not taken seriously. Basically, I had my doubts that something such as this could be pulled off well. First of all, the acting is terrific and not the slightest bit cheesy.

You take on the part of Detective Inspector Frederick Jenks, visiting a little place called Edenton to investigate the drowning of a young woman named Kate Vine just outside the village. The detective is a likable character who’s good at getting information from people. Jenks mostly plays by the book but has no problem snooping around if he, say, finds a key just lying around on the ground. There were a few really tricky parts in the game where I got stuck.