It came from Redmond: Windows Server 2016 could rattle the competition. A couple of decades ago, Microsoft was the kaiju of network computing. 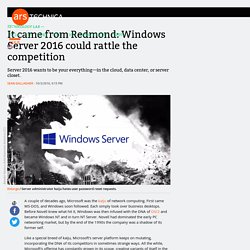 First came MS-DOS, and Windows soon followed. Each simply took over business desktops. Before Novell knew what hit it, Windows was then infused with the DNA of OS/2 and became Windows NT and in turn NT Server. Novell had dominated the early PC networking market, but by the end of the 1990s the company was a shadow of its former self. Like a special breed of kaiju, Microsoft's server platform keeps on mutating, incorporating the DNA of its competitors in sometimes strange ways. In 2016, it's happening again. It came from Redmond: Windows Server 2016 could rattle the competition. Why are there so many Windows Server 2003 stragglers? Windows Server 2003 is almost out of support, and many of us simply don't have the option to upgrade to a newer operating system. 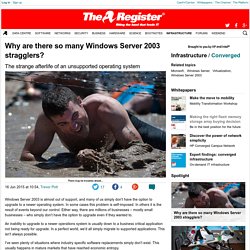 The Great Windows Server 2003 migration: How to plan your trip. Think switching OS is bad? 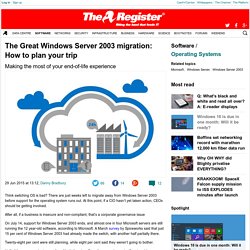 There are just weeks left to migrate away from Windows Server 2003 before support for the operating system runs out. At this point, if a CIO hasn’t yet taken action, CEOs should be getting involved. After all, if a business is insecure and non-compliant, that’s a corporate governance issue On July 14, support for Windows Server 2003 ends, and almost one in four Microsoft servers are still running the 12 year-old software, according to Microsoft. A March survey by Spiceworks said that just 15 per cent of Windows Server 2003 had already made the switch, with another half partially there. 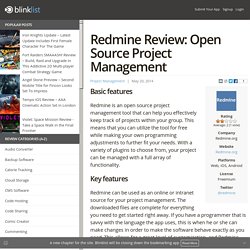 This means that you can utilize the tool for free while making your own programming adjustments to further fit your needs. With a variety of plugins to choose from, your project can be managed with a full array of functionality. Key features. Comparison of project management software. The Rationale Behind Soaring App Development Prices. The best FREE data modeling tool ever. Yup, I said FREE! 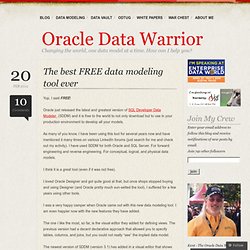 Oracle just released the latest and greatest version of SQL Developer Data Modeler (SDDM) and it is free to the world to not only download but to use in your production environment to develop all your models. As many of you know, I have been using this tool for several years now and have mentioned it many times on various LinkedIn forums (just search for me and check out my activity). I have used SDDM for both Oracle and SQL Server. For forward engineering and reverse engineering. For conceptual, logical, and physical data models. No deadline extension for Windows Server 2003 end of support. The July 14, 2015, deadline for which Microsoft will end support for Windows Server 2003 is final and will not be extended. 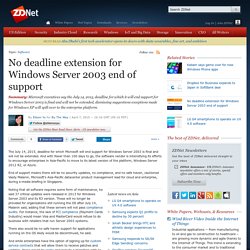 And with fewer than 100 days to go, the software vendor is intensifying its efforts to encourage enterprises in Asia-Pacific to move to its latest version of the platform, Windows Server 2012 R2, or Azure. End of support means there will be no security updates, no compliance, and no safe haven, cautioned Vasily Malanin, Microsoft's Asia-Pacific datacenter product management lead for cloud and enterprise, during a media briefing in Singapore. Noting that all software requires some form of maintenance, he said 37 critical updates were released in 2013 for Windows Server 2003 and its R3 version. These will no longer be provided for organizations still running the OS after July 14, Malanin said, adding that these servers will not pass compliance audits. 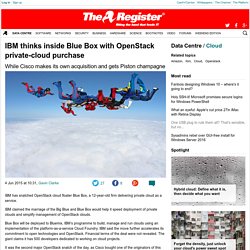 IBM claimed the marriage of the Big Blue and Blue Box would help it speed deployment of private clouds and simplify management of OpenStack clouds. Blue Box will be deployed to Bluemix, IBM’s programme to build, manage and run clouds using an implementation of the platform-as-a-service Cloud Foundry. IBM said the move further accelerates its commitment to open technologies and OpenStack. Financial terms of the deal were not revealed. The giant claims it has 500 developers dedicated to working on cloud projects. Don't panic as Server 2003 rushes towards end of life. It is time to upgrade. 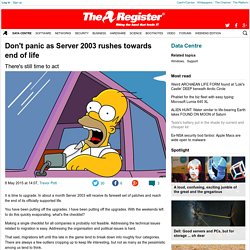 In about a month Server 2003 will receive its farewell set of patches and reach the end of its officially supported life. You have been putting off the upgrades. I have been putting off the upgrades. With the weekends left to do this quickly evaporating, what's the checklist? Making a single checklist for all companies is probably not feasible. That said, migrations left until this late in the game tend to break down into roughly four categories.

Unlike with client operating systems, you don't just shove an upgrade CD into your server. The changes between Server 2003 and Server 2008 were so major that the only way to migrate is to build a new system and move the applications, settings and so forth across. Unless they need 16-bit applications, few companies are using Server 2008 today. IT BRAIN. Come iniziare: facile e veloce. Excel dropdown menu. It's the end of life as we know it for Windows Server 2003. Windows Server 2003 will pass out of Microsoft support on July 14, 2015. 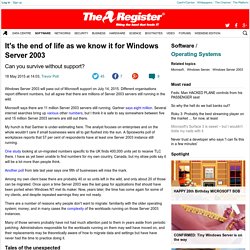 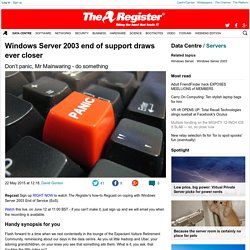 Watch this live, on June 12 at 11:00 BST - if you can't make it, just sign up and we will email you when the recording is available. Handy synopsis for you Flash forward to a time when we rest contentedly in the lounge of the Expectant Vulture Retirement Community, reminiscing about our days in the data centre. As you sit little Hadoop and Uber, your adoring grandchildren, on your knee you see that something ails them. VMware beta testing database-as-a-service based on SQL Server.

VMware is beta testing a database-as-a-service offering running SQL Server 2008 R2 & 2012. VMware documents sighted by The Register suggest the new service will be called “vCloud Air SQL” and will initially target test and dev scenarios, but also offer a warm failover option for those seeking a disaster recovery option for their on-premises databases. Virtzilla thinks that the service will also be able to handle non-critical workloads, but will in time grow to handle production apps.

It's already possible to run SQL server on VMware's vCloud Air service, but in self-provisioning mode. Microsoft releases first public preview of SQL Server 2016. Create a test machine in Windows 8 Client Hyper-V. Greg Shultz shows you how to setup and configure Windows 8's Client Hyper-V. In the article, Get the free 90-day evaluation of Windows 8 Enterprise, I showed you how to download and install the free 90-day evaluation copy of the final version of Windows 8 Enterprise so that you could begin experimenting with the new operating system.

Tor Anonymity Software vs. the National Security Agency. Behind this week’s cover Last year, Edward Snowden turned over to the Guardian, a British newspaper, some 58,000 classified U.S. government documents. Just a fraction of the files have been made public, but they outline the National Security Agency’s massive information-collection system. They’ve thrown light onto the methods of an arm of the government used to working in the shadows and started an intense debate over national security and personal liberty. One of the earliest and most explosive revelations was the existence of Prism, a top-secret program giving the NSA direct access to the systems of Google, Facebook, and other U.S. Internet companies. Snowden himself remains something of a mystery even as the U.S. government attempts to obtain his return from Russia, where he’s in hiding, and very possibly jail him for the rest of his life. Tor, an acronym for “the onion router,” is software that provides the closest thing to anonymity on the Internet.

Concept between FI-CA, FI-AR, and FI-AP. Hi Yoshitada, Firstly to clear your confusion, FI-CA documents are not posted to FI-GL. In FI-CA, all relevant financial postings and transactions with customers are recorded in the sub-ledger. OTRS vs Remedy Action Request System in Help Desk Software.