Opioid and heroin epidemic is changing pain treatment. Enny Nuraheni / ReutersMost pills today are made in factories like this one in Indonesia. 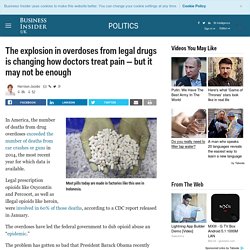 The overdoses have led the federal government to dub opioid abuse an “epidemic.” The problem has gotten so bad that President Barack Obama recently allocated $1.1 billion to fight the epidemic in his proposed budget for 2017. It follows up on a 2011 plan from the White House to address the issue through expanded education, enforcement, and drug tracking. “Physicians are becoming hesitant to prescribing these drugs because of the bad publicity surrounding the abuse,” Dr. Doctors implant 3D-printed vertebrae in 'world's first' surgery. Mobbs worked with Anatomics, an Australian medical device manufacturer, to craft perfect replicas of the patient's top two vertebrae out of titanium. 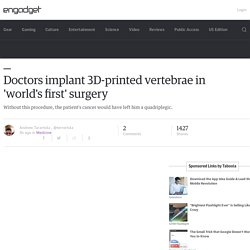 This is the first time that these two particular neck bones have been printed and installed. "To be able to get the printed implant that you know will fit perfectly because you've already done the operation on a model ... It was just a pure delight," Mobbs told Mashable Australia. "It was as if someone had switched on a light and said 'crikey, if this isn't the future, well then I don't know what is'. " How does my brain work? Uk.businessinsider. Automated Assessment of Children’s Postoperative Pain Using Computer Vision. 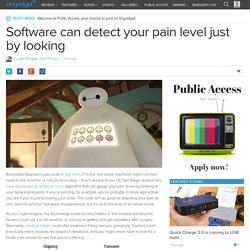 In the real world, machines might not even need to ask whether or not you're hurting -- they'll already know. UC San Diego researchers have developed a computer vision algorithm that can gauge your pain levels by looking at your facial expressions. If you're wincing, for example, you're probably in more agony than you are if you're just furrowing your brow. Hands-On With Thync’s Mood-Altering Headset. Thync is launching its mood-altering headset today, letting you find a state of calm or boost your energy with controls on your smartphone. 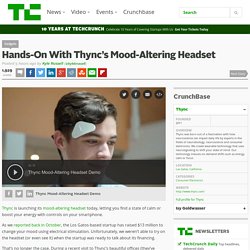 As we reported back in October, the Los Gatos-based startup has raised $13 million to change your mood using electrical stimulation. Unfortunately, we weren’t able to try on the headset (or even see it) when the startup was ready to talk about its financing. That’s no longer the case. During a recent visit to Thync’s beautiful offices (they’ve renovated an old opera hall), I got to strap the startup’s mood-altering wave generator to the ol’ noggin. As it turns out, Thync’s gadget is more of a module than a headset. When you open Thync’s app, it quickly connects to the module and then lets you choose between two emotional states: calm and energy.

During the demo, Thync co-founder and CEO Isy Goldwasser explained that the module wasn’t directly stimulating neurons in my brain (that would be too damn weird for me to try, to be honest). The health hazards of sitting. Sunitinib. Sunitinib (marketed as Sutent by Pfizer, and previously known as SU11248) is an oral, small-molecule, multi-targeted receptor tyrosine kinase (RTK) inhibitor that was approved by the FDA for the treatment of renal cell carcinoma (RCC) and imatinib-resistant gastrointestinal stromal tumor (GIST) on January 26, 2006. 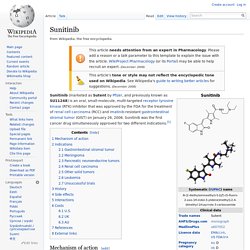 Sunitinib was the first cancer drug simultaneously approved for two different indications.[1] Mechanism of action[edit] Sunitinib inhibits cellular signaling by targeting multiple receptor tyrosine kinases (RTKs). Sunitinib also inhibits KIT (CD117),[2] the RTK that (when improperly activated by mutation) drives the majority of gastrointestinal stromal cell tumors.[3] It has been recommended as a second-line therapy for patients whose tumors develop mutations in KIT that make them resistant to imatinib, or who become intolerant to the drug.[4][5] In addition, sunitinib inhibits other RTKs.[6] These include the following: Indications[edit] Gastrointestinal stromal tumor[edit] U.S.

Uk.businessinsider. Uk.businessinsider. For whom is this therapy suitable? Unless your ENT doctor instructs you otherwise, it can be used to treat tinnitus with the following characteristics: To date, the effectiveness of the therapy has been proven for patients with the following: Before you can begin your Tinnitracks therapy, you will need: Subjective tinnitus: Tinnitus is subjective when the ENT doctor’s diagnosis does not detect any physical sound source in the patient’s body (e.g. sound coming from blood vessels). 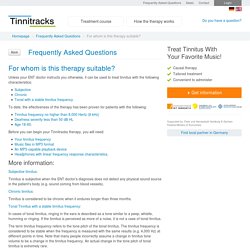