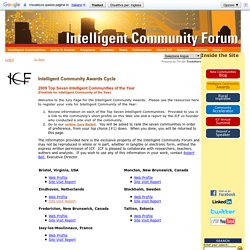 Please use the resources here to register your vote for Intelligent Community of the Year: Review information on each of the Top Seven Intelligent Communities. Provided to you is a link to the community's short profile on this Web site and a report by the ICF co-founder who conducted a site visit of the community. Go to our online Jury Ballot. The information provided here is the exclusive property of the Intelligent Community Forum and may not be reproduced in whole or in part, whether in tangible or electronic form, without the express written permission of ICF. “MEDIALAND” Living Lab – Issy-les-Moulineaux.

The City of Issy-les-Moulineaux is a Living Lab for Innovation. 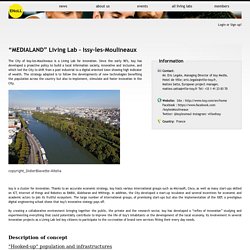 Since the early 90’s, Issy has developed a proactive policy to build a local information society, innovative and inclusive, and which led the City to shift from a post industrial to a digital-oriented town showing high indicator of wealth. The strategy adopted is to follow the developments of new technologies benefiting the population across the country but also to implement, stimulate and foster innovation in the City. copyright_DidierBlavette-Altelia Issy is a cluster for Innovation. Thanks to an accurate economic strategy, Issy hosts various international groups such as Microsoft, Cisco, as well as many start-ups skilled on ICT, Internet of things and Robotics as EMBIX, Aldebaran and Withings. Description of concept "Hooked-up" population and infrastructures. Living Labs. Membership Types The ENoLL organisation has three kinds of memberships: Effective, Associated and Adherent Members. 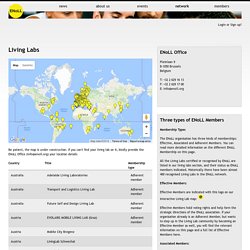 You can read more detailed information on the different ENoLL Membership on this page. All the Living Labs certified or recognised by ENoLL are listed in our living labs section, and their status as ENoLL members indicated. Historically there have been almost 400 recognised Living Labs in the ENoLL network. Effective Members: Effective Members are indicated with this logo on our interactive Living Lab map: Effective Members hold voting rights and help form the strategic directions of the ENoLL association. Associated Members: These organisations are not Living Labs themselves, but are dedicated to support and development of the Living Lab community. You can find the full list of Associated Members on this page. Adherent Members Effective and Associated members pay an annual membership fee that give them access to all the ENoLL Services. Intelligent Community Forum (ICF) Intelligent Community Forum (ICF) 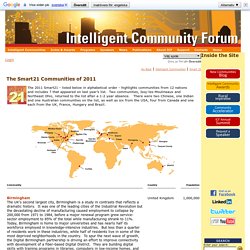 It has a per-capita income 86% higher than the Brazilian average, thriving industrial and tourist sectors, and an exploding technology offshoring industry experiencing a 40% annual growth. More than 3,500 companies offer services including IT infrastructure, software development, technical support, systems implementation and enterprise applications. From 1975 to 1995, its GDP grew nearly 50% more than the national average. Yet while other Brazilian cities have welcomed heavy industry, Curitiba accepted only non-polluters and developed an industrial district with so much green space that it was derided as a “golf course” until it filled up with major businesses.

Beginning in the 1970s, the master plan laid out streets, public transportation, shopping, industrial and residential areas. Intelligent Community Forum (ICF) In 1997, the government of Issy-les-Moulineaux, a suburb of Paris, made a revolutionary decision: to outsource its entire information technology (IT) infrastructure to Euriware, a 10-year-old Paris company that was one of France’s first outsourcing firms. 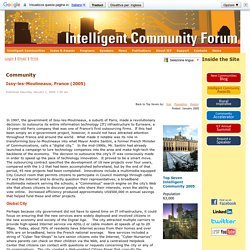 If this had been simply an e-government project, however, it would not have attracted attention throughout France and around the world. What made it notable was its role in transforming Issy-le-Moulineaux into what Mayor Andre Santini, a former French Minister of Communications, calls a “digital city.” In the mid-1990s, Mr. Santini had already launched a campaign to lure technology companies into the area and make high-tech the backbone of the economy. The decision to outsource the city’s IT was consciously made in order to speed up the pace of technology innovation. Global City More Employees Than Citizens Since 1990, the population of Issy-les-Moulineaux has increased by 35% without any increase in government employment. Intelligent Community Forum (ICF)