Excerpted from: I am a medical doctor with over 25 years of experience working in the fields of global health, applied epidemiology, disaster relief, health and human security, humanitarian assistance, reconstruction, emergency preparedness and crisis monitoring. I was born near Honolulu on the Hawaiian island of Oahu. Due to my father's occupation as a Naval officer and diplomat, I traveled more places than most people do in a lifetime before I was 18. Lived in Switzerland, India, New Zealand, South Africa and the South of France. After graduating from college at Stanford, I spent the next three years being a nomad traveler hitchhiking around Asia, North Africa, South America, New Guinea, Bornea, New Australia and Eastern Europe. When I ran out of money, I worked odd jobs, primarily in building and construction, carpentry, painting houses, waiting tables in restaurants, repairing boats, yachts, and even some quite large luxury cruise ships. Always entrepreneurial by nature, I discovered at a very young age that there is always a way to make a living, even if it meant living quite frugally and in rather austere conditions. During my travels in the USA I would hold a sign up that said "Traveling Need Work" and stand in front of a hardware store. But I never lost sight of my childhood dream to become a medical doctor. This three year period might seem to others to have been aimless wandering, a "lost weekend", but in truth was the time where I really "found myself" as well as learning about life and being completely self-sufficient. Despite not doing much in the way of studying or anything remotely resembling an academic life since I left Stanford, I did remarkably well on my medical entrance examinations and was accepted to several medical schools. I decided on the University of Rochester in upstate New York. After graduating from medical school, I did my clinical medical training in Emergency Medicine in Chicago followed by public health studies in Baltimore at the Johns Hopkins School of Hygiene and Public Health. After several years as an attending physician at the Johns Hopkins Hospital, I have spent the better part of the past twenty years working in Atlanta Georgia at the "Centers for Disease Control and Prevention" or CDC as a medical epidemiologist (otherwise known as a "disease detective", a job popularized in novels and films such as "The Andromeda Strain", "And the Band Played On", "Outbreak", "Ebola", "The Hot Zone" and "Contagion"). As a medical epidemiologist at the CDC for more than two decades, my public health work took me all over the world, and I had the pleasure of living in a wide range of habitats, from North African deserts, tropical rain forests in Southeast Asia, high mountains above timberline in the Hindu Kush, and above the Arctic Circle in the vast Siberian tundra. Many stories here, believe me! Yes, I've had a very interesting (and eventful) life. Being adventurous, intense and passionate about just about everything I do, I admit I made a lot of mistakes along the way, but unlike many people, I learned from these misadventures and rarely made the same mistake again. For the most part, I lived frugally, I invested well and now I can do what I like, when I like, and for the most part, what I do best. I also finally have the time to do a lot of reading, writing, take the occasional short-term medical missions to work in the poorest countries in the most difficult circumstances and have even consulted on some movies and documentaries. In my lifetime, I really have done just about everything and have been to just about everywhere! But what do I do for fun? Despite all the travel I was able to do at CDC, I still adore going to the most exotic, off-the-beaten track places to experience different cultures, cuisines, personal relationships and unusual environments. I have very eclectic interests including architecture, English gardens, animal husbandry, family and historical genealogy (especially of royalty and noble families), polo, field ornithology, marine biology, military history, especially the development of naval warfare since the time of Themistocles and Pericles in Athens, yacht and outrigger design, electrical engineering, ship and automobile restoration (I used to own a Maserati that is still a classic). I love people and have always been very fond of stimulating conversation, especially with creative and talented people like artists, writers, musicians, athletes, scholars, actors, dancers, scientists, film-makers, inventors, wanderers and iconoclasts. Since early childhood, I have had a fascination with all living creatures, particularly dinosaurs. Since very early childhood, I have had a fascination with all living creatures. I usually have at least a three dogs, a cat, birds and a couple horses. One can usually find me up early walking my two golden retrievers and beautiful six week old Husky in the Shenandoah mountains or along the Potomac river on crisp, clear autumn days. I currently am a founding partner at Aegis Health Security. The core of our work is to strengthen corporate, government and voluntary organization partnerships through aggressive marketing and networking using both traditional media (film, TV, radio, theater, art exhibits, etc.) and new and innovative applications of internet-based social media to strengthen the international community's response, recovery and resilience to disasters (such as Hurricane Sandy , which severely damaged our New York City office). However, I mostly spend my time raising awareness and money for organizations that work to strengthen the education and health of children with very special needs who are homeless, abused, starving, illiterate, left orphaned or destitute by natural disasters, or traumatized by war. This is something I believe passionately in. And which I intend to spend the rest of my life doing. C'est toute. "...I live and work on the edge - the views are breathtaking, the experiences deep and satisfying and the learning is limitless...." Ʃɾìϲ Ƙ. Ɲסּϳі

This is the main conclusion from scientists from University of Copenhagen, after 100 researchers and policy experts from EU countries were gathered this week at the University of Copenhagen to discuss how to organise the future UN Intergovernmental Panel for Biodiversity and Ecosystem Services, IPBES -- an equivalent to the UN panel on climate change (IPCC). Refugees. Why is Biodiversity Important? Chernobyl. Volcanoes, earthquakes &c. 2011 Japanese Earthquake and Tsunami. All about hurricanes. Hurricanes. Serval Mesh Founders Aim To Create Disaster-Proof Mobile Network.

Several Australian telecommunications researchers have started taking steps to build a disaster-proof mobile network and are looking for more funding to expand their cause. 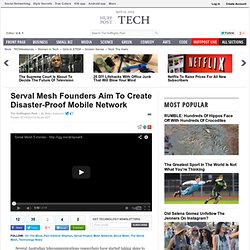 They developed free software, called The Serval Mesh, which enables Android phones to send and receive information using built-in Wi-Fi without depending on established cellular networks. Co-founder Paul Gardner Stephen, who is part of the nonprofit Serval Project based in Australia, decided to develop the software after grappling with Haiti's infrastructure failures in the wake of the country's 2010 earthquake. The founders have also created a "mesh extender" device that substantially increases the Wi-Fi range, currently at 100 meters, between phones on the new network. They launched a fundraising page earlier this month to help turn the prototype of the device into a product that can be distributed to consumers.

Also on HuffPost: MERS: The Major Threat That’s Not on Your Risk Map. I spend a good part of my week speaking with executives and public officials about high-stakes leadership. 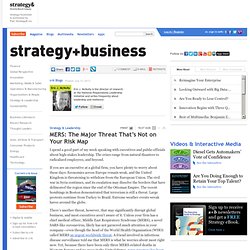 The crises range from natural disasters to radicalized employees, and beyond. If you are an executive at a global firm, you have plenty to worry about these days: Economies across Europe remain weak, and the United Kingdom is threatening to withdraw from the European Union. The civil war in Syria continues, and its escalation may dissolve the borders that have delineated the region since the end of the Ottoman Empire. The recent bombings in Boston demonstrated that terrorism is still a threat. Large protests continue from Turkey to Brazil. There’s another threat, however, that may significantly disrupt global business, and most executives aren’t aware of it.

But there are many potential viral threats that never pose a significant threat to humans. More than half of the confirmed MERS cases to date have been fatal. MERS, of course, is not a Muslim illness. Medieval/Arthurian Art. Oregon regional primate research center. Dressing for work. Geneva Switzerland. Public Health Consequences of Disasters. Election to the Institute of medicine. "Golden 24 Hours" 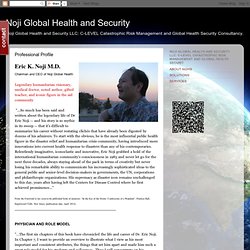 Noji M.D.Chairman and CEO of Noji Global Health Legendary humanitarian visionary, medical doctor, noted author, gifted teacher, and iconic figure in the aid community "...So much has been said and written about the legendary life of Dr Eric Noji -- and his story is so mythic in its sweep -- that it's difficult to summarize his career without restating clichés that have already been digested by dozens of his admirers. To start with the obvious, he is the most influential public health figure in the disaster relief and humanitarian crisis community, having introduced more innovations into current health response to disasters than any of his contemporaries. "…The first six chapters of this book have chronicled the life and career of Dr. From Chapter 7, "Anatomy of a Doctor", excerpts from "In the Eye of the Storm: Confessions of a Wanderer", Prentice Hall, Englewood Cliffs, New Jersey (publication date, April 2014) Federal Emergency Management Agency. 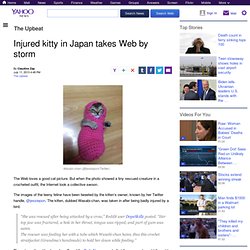 But when the photo showed a tiny rescued creature in a crocheted outfit, the Internet took a collective swoon. The images of the teeny feline have been tweeted by the kitten’s owner, known by her Twitter handle, @jessiepon. The kitten, dubbed Wasabi-chan, was taken in after being badly injured by a bird. “She was rescued after being attacked by a crow,” Reddit user DopeSk1llz posted.