The beatles and music

If The Beatles' 'Hey Jude' Was In A Minor Key. Musical Mash-Up: 'Imagine' And 'Band On The Run' 5 Mind-Blowing True Stories Behind Famous Songs. #2. The Beatles Slapped Their First Album Together in a Day Via Forbes The Beatles' second single, "Please Please Me," was a huge breakthrough hit . Normally, that's cause for celebratory coke lines off the soft belly of a kitten. At least we think that's how rock stars party. However, the Fab Four's producer, George Martin, had other ideas. Via Roy Kerwood "Hey, remember this look. John Lennon had just come down with a particularly bad cold, which meant his voice had gone from "gloriously melodic" to "howler monkey falling into farm machinery.

" So, they worked around it, which gave birth to the now-famous screamed vocals on "Twist and Shout. " And here's the same song performed live, after Lennon's larynx stopped wanting to crawl out of his mouth and throttle him for what he was doing to it: The studio version was the one and only usable take; after Lennon howled it out, he was completely spent. . #1. Via Theaudioperv.com Think of the worst boss you've ever had. Via Altsounds "OK, good. Paul McCartney sings unperformed Beatles tracks on tour. 5 May 2013Last updated at 07:43 ET Sir Paul will return to New York in June as part of the Out There tour Sir Paul McCartney gave his first ever live rendition of a selection of classic Beatles tracks at the opening night of his world tour in Brazil. 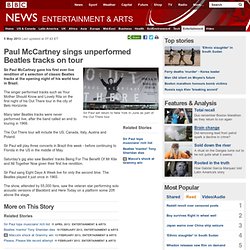 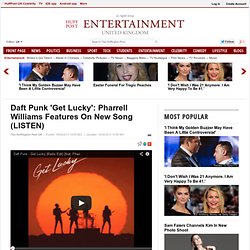 The song, which features Pharrell Williams on vocals and Nile Rodgers on guitar, delivers on the funky promise of the many teasers the French house duo debuted during US TV show 'Saturday Night Live' and at Coachella music festival's first weekend. Multiple false versions of the track - mostly comprised of loops stitched together by overzealous fans and trolls - permeated the internet in the days up to the release. 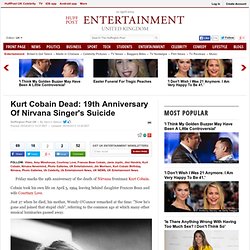 Cobain took his own life on April 5, 1994, leaving behind daughter Frances Bean and wife Courtney Love. Just 27 when he died, his mother, Wendy O'Connor remarked at the time: "Now he's gone and joined that stupid club", referring to the common age at which many other musical luminaries passed away. Jimi Hendrix, Janis Joplin, Kurt Cobain, Brian Jones and Jim Morrison all died at the age of 27, as did Amy Winehouse. Released in 1991, Nirvana's seminal album Nevermind sold 10 million copies. The band also enjoyed chart-topping success with In Utero, its final release before Cobain's death. We miss you! Loading Slideshow Here are some of our favorite Nirvana performances. "Smells Like Teen Spirit" 1 of 10 MTV Studios, 1992 Watch video of Kurt, Courtney and baby Frances Bean backstage at MTV in 1993. 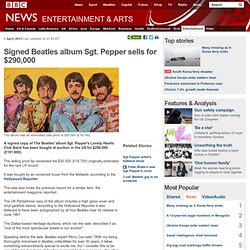 Pepper's Lonely Hearts Club Band has been bought at auction in the US for $290,500 (£191,000). The selling price far exceeded the $30,000 (£19,700) originally estimated for the rare LP record. It was bought by an unnamed buyer from the Midwest, according to the Hollywood Reporter. 'Lost' Beatles concert to be screened in America. 25 April 2012Last updated at 11:26 ET The Beatles pictured in America in 1964 Rare footage of a Beatles concert lost for 48 years is to be given a limited screening in the United States. 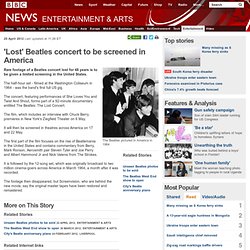 The half-hour set - filmed at the Washington Coliseum in 1964 - was the band's first full US gig. The concert, featuring performances of She Loves You and Twist And Shout, forms part of a 92-minute documentary entitled The Beatles: The Lost Concert. The film, which includes an interview with Chuck Berry, premieres in New York's Ziegfield Theater on 6 May. It will then be screened in theatres across America on 17 and 22 May. The first part of the film focuses on the rise of Beatlemania in the United States and contains commentary from Berry, Mark Ronson, Aerosmith pair Steven Tyler and Joe Perry and Albert Hammond Jr and Nick Valensi from The Strokes.

It is followed by the 12-song set, which was originally broadcast to two million cinema-goers across America in March 1964, a month after it was recorded. Can't Tell the Difference Between Witch House and Nu Disco? Welcome to Electronic Dance Music 101. Photo Credit: Shutterstock.com/Maxim Blinkov March 8, 2013 | Like this article? 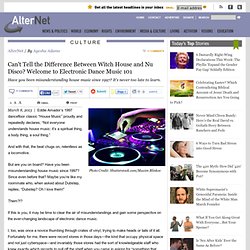 Join our email list: Stay up to date with the latest headlines via email. 100 Greatest Beatles Songs. By Elvis Costello I first heard of the Beatles when I was nine years old. 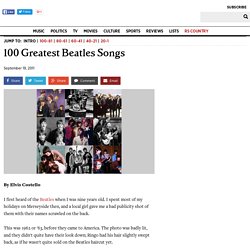 I spent most of my holidays on Merseyside then, and a local girl gave me a bad publicity shot of them with their names scrawled on the back. This was 1962 or '63, before they came to America. The photo was badly lit, and they didn't quite have their look down; Ringo had his hair slightly swept back, as if he wasn't quite sold on the Beatles haircut yet. I didn't care about that; they were the band for me. I was exactly the right age to be hit by them full-on. Every record was a shock. And John Lennon and Paul McCartney were exceptional songwriters; McCartney was, and is, a truly virtuoso musician; George Harrison wasn't the kind of guitar player who tore off wild, unpredictable solos, but you can sing the melodies of nearly all of his breaks.

Lennon, McCartney and Harrison had stunningly high standards as writers. My absolute favorite albums are Rubber Soul and Revolver.