Rep. Jack Kingston Proposes That Poor Students Sweep Floors In Exchange For Lunch. Ted Cruz isn't far from the only Tea Party nut. There's plenty more of them. It's instructive to remember that when the Tea Party first began to gather steam, the name referred to a "party" in the celebration sense – the Boston Tea Party, specifically: an event of planned chaos, a protest that masqueraded as an Indian attack. 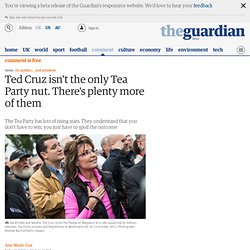 Over time, the name has lost its punny puckishness much as the movement has steadily shifted from a proudly anacharical – even populist – response and rebellion within the GOP to a smoothly functioning alternative to it. The government shutdown proved that attempts by the GOP establishment to co-opt the Tea Party as a source of energy just created a network of political sleeper agents. With its own mechanism for drafting (and supporting) candidates, its own agenda, and its own media eco-system, the Tea Party is a third party by almost any criteria but ballot affiliation – and leadership. How's Obamacare Turning Out? Great If You Live in a Blue State, and 'Screw You' If You Have a Republican Governor.

Photo Credit: Andy Dean Photography/ Shutterstock.com May 25, 2013 | Like this article? 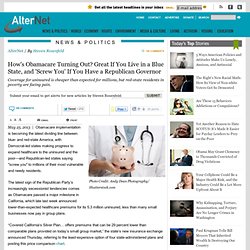 Join our email list: Stay up to date with the latest headlines via email. Obamacare implementation is becoming the latest dividing line between blue- and red-state America, with Democrat-led states making progress to expand healthcare to the uninsured and the poor—and Republican-led states saying "screw you" to millions of their most vulnerable and needy residents. The latest sign of the Republican Party’s increasingly secessionist tendencies comes as Obamacare passed a major milestone in California, which late last week announced lower-than-expected healthcare premiums for its 5.3 million uninsured, less than many small businesses now pay in group plans. The federal government plans to step in later this summer and offer uninsured people in recalcitrant red states the option of buying plans via federally run heath care exchanges. Progress in Blue States. Social Security's Explosive Injustices. (Image: Woman covers face via Shutterstock) People over 65, a growing share of the US population, are suffering a crisis-ridden capitalist system. 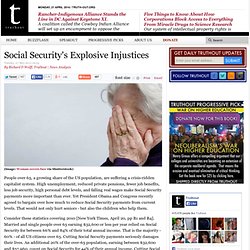 America is rightly on edge. 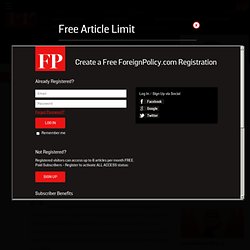 Obamacare Faces Near-Solid Block In The South. ATLANTA -- As more Republicans give in to President Barack Obama's health-care overhaul, an opposition bloc remains across the South, including from governors who lead some of the nation's poorest and unhealthiest states. 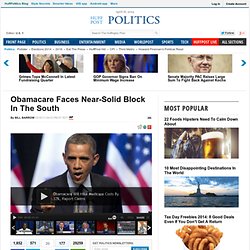 "Not in South Carolina," Gov. Nikki Haley declared at the recent Conservative Political Action Conference. "We will not expand Medicaid on President Obama's watch. We will not expand Medicaid ever. " Widening Medicaid insurance rolls, a joint federal-state program for low-income Americans, is an anchor of the law Obama signed in 2010. Have We Ever Gotten to the Bottom of Exactly 'Why' Bush and the Neocons Disastrously Invaded Iraq? 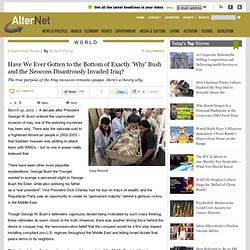 Join our email list: Stay up to date with the latest headlines via email. A decade after President George W. White House Tours Remain The Only Sequestration Casualty Anyone Cares About. Life isn’t easy. 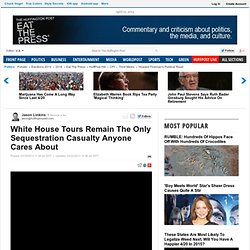 Latin America takes action to decriminalize abortion. This month is the 40th anniversary of one of the most important legal decisions of our time: Roe v. 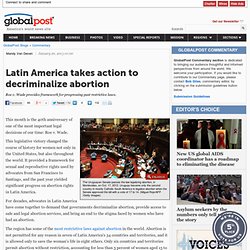 Wade. This legislative victory changed the course of history for women not only in the United States, but also throughout the world. It provided a framework for sexual and reproductive rights used by advocates from San Francisco to Santiago, and the past year yielded significant progress on abortion rights in Latin America. For decades, advocates in Latin America have come together to demand that governments decriminalize abortion, provide access to safe and legal abortion services, and bring an end to the stigma faced by women who have had an abortion.

Hagel hearings reinforce congressional support for whatever Israel does. OWLS HEAD, Maine — The Senate Armed Services Committee — surely one of the most important committees in what we euphemistically refer to as the Upper House of our Congress — gave a nice, day-long display at the end of last week as to why Congress's approval rating, in a new survey, remained in single digits. 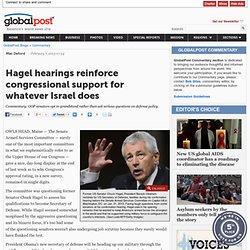 The committee was questioning former Senator Chuck Hagel to assess his qualifications to become Secretary of Defense. While Hagel seemed somewhat nonplused by the aggressive questioning and its bizarre focus, it's too bad some of the questioning senators weren't also undergoing job scrutiny because they surely would have flunked the test. These will be years when China's unsurprising interest in expanding its influence in Asia may collide with the growing nationalism of a Japan generations removed from World War II. 'Judge Me On My Record,' Says David Cameron. So We Did...

"I want to be judged," David Cameron told Andrew Marr on his Sunday show. 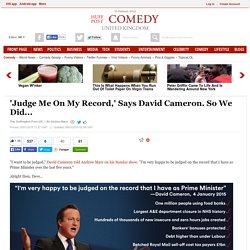 "I'm very happy to be judged on the record that I have as Prime Minister over the last five years. " Alright then, Dave... And that's ALL OF IT": The Kochs & the XL Pipeline. Rep. Paul Ryan says small businesses are now taxed at higher rate than corporations. LSE Student Daniel Wickham's Epic Tweets Expose Hypocritical World Leaders Who Attended Charlie Hebdo Rally.

Noam Chomsky, Why It's "Legal" When the U.S. Does It. Credit the Arab Spring and what’s followed in the Greater Middle East to many things, but don’t overlook American “unilateralism.” After all, if you want to see destabilization at work, there’s nothing like having a heavily armed crew dreaming about eternal global empires stomp through your neighborhood, and it’s clear enough now that whatever was let loose early in the twenty-first century won’t end soon. If, from Tunisia and Egypt to Syria and Libya, the Arab Spring was a series of popular uprisings, it was also a series of unravelings. Progress Reports - ThinkProgress. Barack Obama accused of 'dark money' hypocrisy by non-disclosing nonprofit. Randy Turner: Missouri House Speaker: 'Close, Personal Constituent' Made Me a Birther.

It was a "constituent of mine," who led Missouri Speaker of the House Tim Jones, R-Eureka, to join Orly Taitz's crackpot birther lawsuit trying to have Barack Obama removed as president of the United States because, according to them, he is not a natural-born American citizen. ‘Death Spiral’ States? Wyoming Wingnut Launches Unconstitutional Attack on Nonexistent Gun Laws.

January 10, 2013 | Like this article? Join our email list: Stay up to date with the latest headlines via email. Florida Gov. Rick Scott Exaggerates Cost Of Medicaid Expansion He Opposes. Jon Stewart Asks ‘What Would Anyone Who Isn’t An A**hole Do?’ Cougartwinkie500.jpg (JPEG Image, 500×986 pixels) - Scaled (81.

Redford500.jpg (JPEG Image, 500×321 pixels) Who Better To Call Out The B.S. Of The NRA Than A Police Commissioner? GOP Uses Government to Hurt, Not Help. Christian Guest Calls Rape Victim "Evil," Gets Reamed Out by Atheist Host. America's Craziest Sheriff Sends Vigilantes To Arizona Schools. Violence Against Women Rages On. Thanks To Gerrymandering, Democrats Would Need To Win The Popular Vote By Over 7 Percent To Take Back The House. With Millions Still Waiting For Sandy Relief, Republicans Reintroduce Obamacare Repeal.

Whaddya Know? Professional Economy Wrecker Alan Greenspan Is at the Heart of the Insidiious 'Fix the Debt' Campaign. One Woman’s War on Debt Gains Steam After Years in the Making. The Tea Party Mindset Still Dominates the GOP. Meet the Grandfather of the Fiscal Cliff: He Works for ALEC. The 8 Craziest Republican Legislative Proposals Of 2012. Washington's Revolving Door Is Hazardous to Our Health. Michigan ‘Right-to-Work’ Bill Is the Wrong Economics for the Middle Class. Lots Of Confused People Looked Up The Word 'Socialism' In The Dictionary Because Of The Election. Like Newt Gingrich, John Boehner May Drive the GOP Tea Party/Corporate Express Off the Cliff. Senate rejects treaty to protect disabled around the world. How To Stop The Father Of Fox News From Entering Your Living Room.

What If Religious Fanaticism Killed Someone You Love?

Things that should anger you