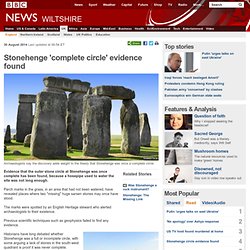 Parch marks in the grass, in an area that had not been watered, have revealed places where two "missing" huge sarsen stones may once have stood. The marks were spotted by an English Heritage steward who alerted archaeologists to their existence. Previous scientific techniques such as geophysics failed to find any evidence. Archaeologists Discover 15 Previously Unknown Monuments Buried Around Stonehenge. Tibetan altitude gene inherited 'from extinct species' 2 July 2014Last updated at 14:03 ET A gene that allows present-day people to cope with life at high altitude was inherited from an extinct species of human, Nature journal has reported. 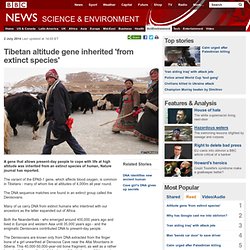 The variant of the EPAS-1 gene, which affects blood oxygen, is common in Tibetans - many of whom live at altitudes of 4,000m all year round. The DNA sequence matches one found in an extinct group called the Denisovans. Many of us carry DNA from extinct humans who interbred with our ancestors as the latter expanded out of Africa. Newly Identified Dinosaur Fauna May Hold Clues To Rich Evolutionary History.

A fossil bed in China that contains some of the world's most exquisitely preserved feathered dinosaurs, early birds, reptiles and mammals may also be home to an equally rich set of older fossils from the Middle Jurassic, a new study finds. 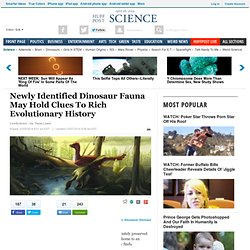 These older fossils, dating back about 160 million years, contain the earliest known gliding mammal, earliest swimming mammal, a flying reptile and the earliest feathered dinosaurs. Ancient Footprints Found In England Date Back 800,000 Years, Called Oldest Outside Africa. LONDON (AP) — They were a British family on a day out — almost a million years ago. 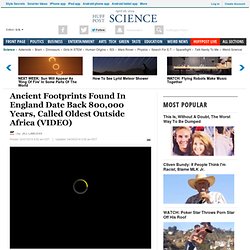 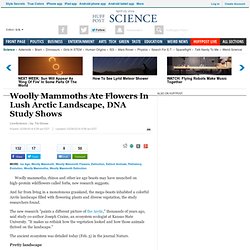 And far from living in a monotonous grassland, the mega-beasts inhabited a colorful Arctic landscape filled with flowering plants and diverse vegetation, the study researchers found. The new research "paints a different picture of the Arctic," thousands of years ago, said study co-author Joseph Craine, an ecosystem ecologist at Kansas State University. "It makes us rethink how the vegetation looked and how those animals thrived on the landscape. " The ancient ecosystem was detailed today (Feb. 5) in the journal Nature. Pretty landscape. Ancient Hearth Found In Israel Dates Back 300,000 Years, Scientists Say. Ancient Cat's Appetite May Help Explain How Wild Felines Got Domesticated.

NEW YORK (AP) — A cat-and-mouse game played out in a Chinese village some 5,300 years ago is helping scientists understand how wild felines transformed into the tame pets we know today. 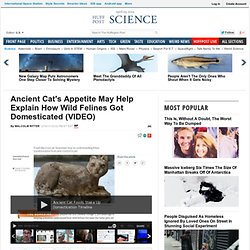 In fact, it was the cat's appetite that started it down the path to domestication, scientists believe. The grain stored by ancient farmers was a magnet for rodents. And that drew wild cats into villages to hunt the little critters. Over time, wild cats adapted to village life and became tamer around their human hosts. That's the leading theory, anyway, for how wild cats long ago were transformed and became ancestors of today's house cats. Neanderthals Buried Their Dead, Cave Excavations Suggest. Are modern humans the only species that has ever dug graves? 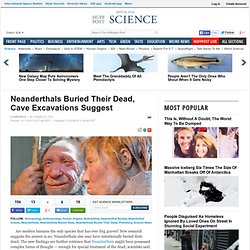 New research suggests the answer is no: Neanderthals also may have intentionally buried their dead. The new findings are further evidence that Neanderthals might have possessed complex forms of thought — enough for special treatment of the dead, scientists said. The first potential discovery of a Neanderthal tomb occurred in 1908 at La Chapelle-aux-Saints in southwestern France. The well-preserved state of these 50,000-year-old bones led researchers to suggest that Neanderthals buried their dead well before modern humans arrived in western Europe. Neanderthal Woman's DNA Reveals Ancient Inbreeding, Mysterious Human Lineage. The existence of a mysterious ancient human lineage and the genetic changes that separate modern humans from their closest extinct relatives are among the many secrets now revealed in the first high-quality genome sequence from a Neanderthal woman, researchers say. 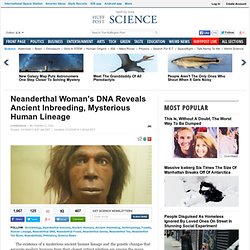 The Neanderthal woman whose toe bone was sequenced also reveals inbreeding may have been common among her recent ancestors, as her parents were closely related, possibly half-siblings or another near relation. Researchers have completed the first high-quality sequence of a Neanderthal genome, using a sample from the toe bone of a Neanderthal woman. Although modern humans are the world's only surviving human lineage, others also once lived on Earth. Mystery early human revealed by DNA data. 18 December 2013Last updated at 13:00 ET The genome sequence came from a toe bone found in Denisova Cave, Siberia DNA analysis of early human remains from a Siberian cave has revealed the existence of a mystery human species. 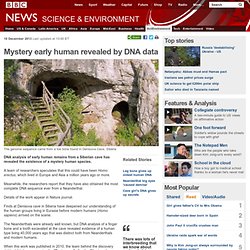 A team of researchers speculates that this could have been Homo erectus, which lived in Europe and Asia a million years ago or more. Meanwhile, the researchers report that they have also obtained the most complete DNA sequence ever from a Neanderthal. Details of the work appear in Nature journal. Finds at Denisova cave in Siberia have deepened our understanding of the human groups living in Eurasia before modern humans (Homo sapiens) arrived on the scene.

Continue reading the main story “Start Quote There was lots of interbreeding that we know about and probably other interbreeding we haven't yet discovered” End QuoteProf Montgomery SlatkinUniversity of California, Berkeley. Cavemen Had Feelings, Too! Prehistoric Peoples Apparently Held Wakes For Their Dead.