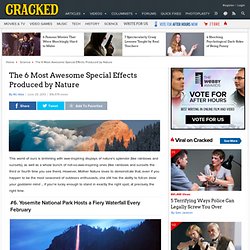 However, Mother Nature loves to demonstrate that, even if you happen to be the most seasoned of outdoors enthusiasts, she still has the ability to full-on blow your goddamn mind ... if you're lucky enough to stand in exactly the right spot, at precisely the right time. #6. Yosemite National Park Hosts a Fiery Waterfall Every February The Oz Report. Sun Tornadoes Are Stunningly Beautiful Captured By Solar Dynamics Observatory. 2013 National Geographic Traveler Photo Contest (PICTURES) How and Why to Teach Your Kids to Code. Untitled. Victorian and Edwardian Fans and Combs at Past Perfect Vintage Clothing. Antique Fans European and Oriental. Payment facilities available to suit you. 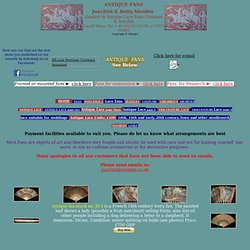 Please do let us know what arrangements are best Most Fans are objects of art and therefore very fragile and should be used with care and not for fanning yourself but more to use as costume accessories or for decorative purposes. Many apologies to all our customers that have not been able to send us emails. Please send emails to: joachim@mendes.co.uk When clicking on Buy Now all the information is already included (e.g. price stock number etc) and therefore we can post your items to you on the following working day! 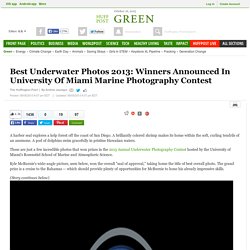 A brilliantly colored shrimp makes its home within the soft, curling tendrils of an anemone. A pod of dolphins swim gracefully in pristine Hawaiian waters. These are just a few incredible photos that won prizes in the 2013 Annual Underwater Photography Contest hosted by the University of Miami's Rosenstiel School of Marine and Atmospheric Science. Kyle McBurnie's wide-angle picture, seen below, won the overall "seal of approval," taking home the title of best overall photo. 'God's Bathtub:' Ancient Lake In Australia Found To Be Unaffected By Climate Change (PHOTO) Scientists from Australia's University of Adelaide have identified a lake so pristine that they're calling it "God's bathtub. 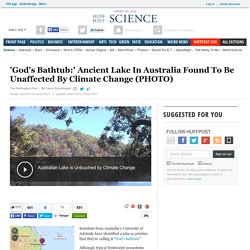 " Although typical freshwater ecosystems vary because of climate change and man's influences, Blue Lake on North Stradbroke Island in Queensland has remained largely unchanged for 7,500 years, according to a recent study. The water is so clear researchers could see to the bottom -- 33 feet below. "It's like God's bathtub," Cameron Barr, a researcher at the university and the study's lead author, told the Australian Associated Press (AAP). A real Good Samaritan. 24 December 2010Last updated at 10:43 One act of kindness that befell British writer Bernard Hare in 1982 changed him profoundly. 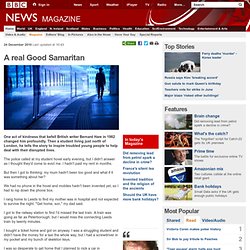 Then a student living just north of London, he tells the story to inspire troubled young people to help deal with their disrupted lives. The police called at my student hovel early evening, but I didn't answer as I thought they'd come to evict me. The shock of the old: what the sculpture of Pan reveals about sex and the Romans. Nothing is more likely to inspire us to see for ourselves than a warning about the effects of looking. 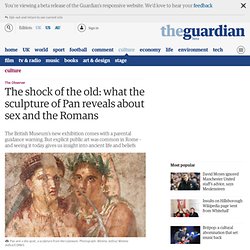 Take the media interest this month when it was revealed that the British Museum's exhibition, Life and Death in Pompeii and Herculaneum, is to include a "parental guidance" notice. Autos - Ten quintessentially British cars. Bedford cat which was 'runt of the litter' turns 27. 13 March 2013Last updated at 17:37 ET. 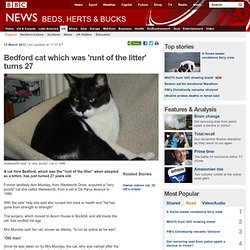 Spiders, not birds, may drive evolution of some butterflies. Butterflies are among the most vibrant insects, with colorations sometimes designed to deflect predators. 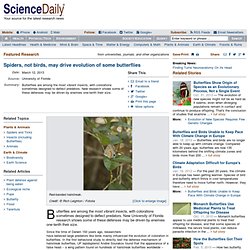 New University of Florida research shows some of these defenses may be driven by enemies one-tenth their size. Since the time of Darwin 150 years ago, researchers have believed large predators like birds mainly influenced the evolution of coloration in butterflies. In the first behavioral study to directly test the defense mechanism of hairstreak butterflies, UF lepidopterist Andrei Sourakov found that the appearance of a false head -- a wing pattern found on hundreds of hairstreak butterflies worldwide -- was 100 percent effective against attacks from a jumping spider.

The research published online March 8 in the Journal of Natural History shows small arthropods, rather than large vertebrate predators, may influence butterfly evolution. BBC - Earth News - Dolphins learn to 'walk on water' Wild dolphins in Australia are naturally learning to "walk" on water. 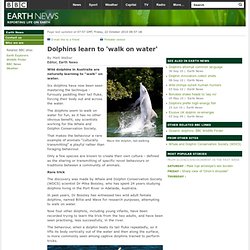 Six dolphins have now been seen mastering the technique - furiously paddling their tail fluke, forcing their body out and across the water. The dolphins seem to walk on water for fun, as it has no other obvious benefit, say scientists working for the Whale and Dolphin Conservation Society. BBC - Earth News - Dolphin species attempt 'common language' A Guyana dolphin leaps to escape the attention of a bottlenose dolphin When two dolphin species come together, they attempt to find a common language, preliminary research suggests. 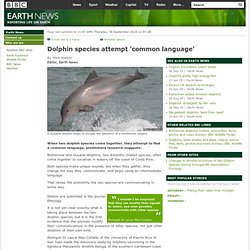 Bottlenose and Guyana dolphins, two distantly related species, often come together to socialise in waters off the coast of Costa Rica. Both species make unique sounds, but when they gather, they change the way they communicate, and begin using an intermediate language. That raises the possibility the two species are communicating in some way. Details are published in the journal Ethology. It is not yet clear exactly what is taking place between the two dolphin species, but it is the first evidence that the animals modify their communications in the presence of other species, not just other dolphins of their own kind. Study finds dolphins mimic calls of social group. 19 February 2013Last updated at 19:40 ET. 100 Greatest Beatles Songs. Stunning Map Reveals World's Earthquakes Since 1898 ǀ Plate Tectonics Map. If you've ever wondered where — and why — earthquakes happen the most, look no further than a new map, which plots more than a century's worth of nearly every recorded earthquake strong enough to at least rattle the bookshelves.

The map shows earthquakes of magnitude 4.0 or greater since 1898; each is marked in a lightning-bug hue that glows brighter with increasing magnitude. The overall effect is both beautiful and arresting, revealing the silhouettes of Earth's tectonic boundaries in stark, luminous swarms of color. The map's maker, John Nelson, the user experience and mapping manager for IDV Solutions, a data visualization company, said the project offered several surprises. Re-imagining Reality. Re-imagining Reality Posted by Morrison Conway on January 7, 2013 · 11 Comments. Why I Haven't Had Sex in 2 and a 1/2 Years. Photo Credit: Shutterstock.com January 4, 2013 | Like this article?

Even in same vineyard, different microbes may create variations in wine grapes. Choosing the perfect wine may soon involve more than just knowing the perfect vintage and chateau. Differences in the microbes present on grapes even in different parts of the same vineyard may contribute to flavor fluctuations in samples of grapes from different tanks, according to research published December 26 in the open access journal PLOS ONE by Mathabatha Setati and colleagues from Stellenbosch University, South Africa. Birdsong study pecks theory that music is uniquely human. Red Rain in India May Have Alien Origin. Paul Krugman On Fiscal Cliff: 'We Created This Crisis Out Of Thin Air'

Yale GALA Music Video Is An Awesome Way To Invite People To A Party. Astronomers spy a planet untethered to any star; there may be many more. Astronomers have spied lonely planets before. But this newest object, seen near the southern constellation Dorado, is the closest to Earth yet found. When Right-Wing Christians Stopped Thinking of Women as People. Photo illustration shows pro-life (R) and pro-choice demonstrators in Washington, DC.

November 15, 2012 | Like this article? Join our email list: Stay up to date with the latest headlines via email. In the autumn of 1978 the Washington Association of Churches and the Washington State Catholic Conference jointly published a six-page pamphlet they called “Abortion: An Ecumenical Study Document.” Just a funny website - enkilm1 - Gmail. Are these animals too 'ugly' to be saved? The Carp and The Seagull.

Related:  mind and music   -  Our Environment and its Degradation   -  Imagination   -  Education   -  Enterprise