Poetry Day: 10 British Actors Read 10 British Poems. Today is National Poetry Day (October 2) in the UK, and the Brits have always done pretty well at providing the world with poems and people who are good at reading poems, here are 10 poetic moments, provided by some of our favorite actors and actresses. 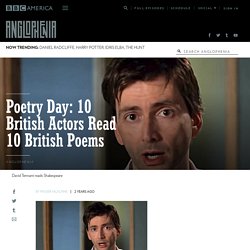 Starting with Benedict Cumberbatch reading “Ode to a Nightingale” by John Keats: And, getting our Anglophenia big two out of the way early, here’s Tom Hiddleston reading W.H. Auden’s “As I Walked Out One Evening,” which uses the folk ballad tradition to draw comparisons between the streets of a city and the fields of the country, with the city clock reminding one and all that natures cycles of birth and death are never too far away: While we’re out for a stroll, here’s Jeremy Irons reading “Daffodils” by William Wordsworth. The poem came from a walk Wordsworth took with his sister Dorothy along Glencoyne Bay in Ullswater in April 1802. Which leads us neatly, into the First World War poets, such as Wilfred Owen. And finally, a rare treat. Medy Show 'Black Jesus' Leaves America's Christian Right Unable To Turn The Other Cheek. NEW YORK -- America’s Christian right is aglow with rage over the portrayal of Jesus Christ as altruistic black guy living in modern-day Compton, California. 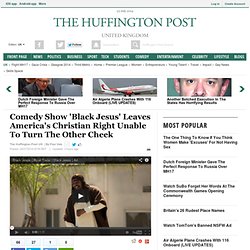 The trailer for Black Jesus, a comedy show scheduled to air on the Adult Swim cable network - the evening schedule of the Cartoon Network in the US - features the Messiah as a man on a "daily mission to spread love and kindness throughout the neighbourhood with the help of his small but loyal group of downtrodden followers". Or, as the Christian Post decried, a “faux messiah dropping four-letter expletives and being accused of ‘smoking all the f*cking weed,’ in addition to being shot at and getting carjacked.” Adult Swim is billing the show as “the most anticipated comeback in history". Rodgers writes: We, the Christian Community are vehemently opposed and violently offended at this upcoming program soon to air on your channel called BLACK JESUS. The HuffPost UK has reached out to Adult Swim for comment. (H/T Right Wing Watch) Whoa! Seahorses Don't Neigh — They Growl. Dogs and bears aren't the only animals that give off warning growls. 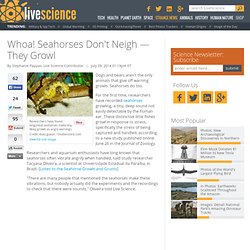 Seahorses do too. For the first time, researchers have recorded seahorses growling, a tiny, deep sound not easily detectable by the human ear. These distinctive little fishes growl in response to stress, specifically the stress of being captured and handled, according to a new study published online June 26 in the Journal of Zoology. Researchers and aquarium enthusiasts have long known that seahorses often vibrate angrily when handled, said study researcher Tacyana Oliveira, a scientist at Universidade Estadual da Paraíba, in Brazil.

[Listen to the Seahorse Growls and Grunts] "There are many people that mentioned the seahorses make these vibrations, but nobody actually did the experiments and the recordings to check that there were sounds," Oliveira told Live Science. Fish songs Many fish make sounds, though humans are rarely around to hear. Rare blue butterflies given fresh hope. The nanny who took thousands of photos of daily life. Publicly, she was a children's nanny. 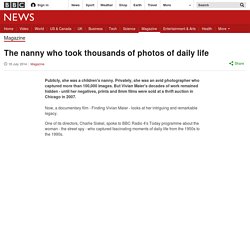 Privately, she was an avid photographer who captured more than 100,000 images. But Vivian Maier's decades of work remained hidden - until her negatives, prints and 8mm films were sold at a thrift auction in Chicago in 2007. Now, a documentary film - Finding Vivian Maier - looks at her intriguing and remarkable legacy. One of its directors, Charlie Siskel, spoke to BBC Radio 4's Today programme about the woman - the street spy - who captured fascinating moments of daily life from the 1950s to the 1990s. Finding Vivian Maier is released in the UK on 18 July 2014. All images ©Vivian Maier/Maloof Collection. Audio interview by Tom Bateman. Related: Vivian Maier photography website Today programme - BBC Radio 4 You might also like: Iron-curtain consumables. The Internet Really Has Changed Everything. 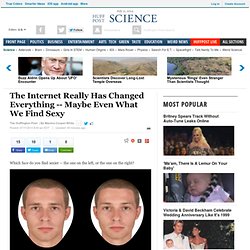 What about these faces? Given that you have access to the internet -- a safe assumption since you made it to this page -- there's a good chance that you went for the faces on the left of each pair. But get this. If you didn't have internet (and weren't reading this right now), you might prefer the faces on the right. So suggests a provocative new study showing a link between internet access and the potential mates we find most attractive.

But what exactly are these differences? To find out, Perrett and a colleague went to El Salvador, where 74 percent of the population lacks internet access. The researchers found that people with internet access were more likely to prefer male faces that were "stereotypically masculine" and female faces that were thinner and less masculine (i.e. the faces on the left in the photos above). That ideal can have some negative consequences for women, she added. Blue Cat's Graphics » Firefox Themes.