ElasticSearch 101 - A getting started tutorial. ElasticSearch is a highly scalable open source search engine with a REST API that is hard not to love. 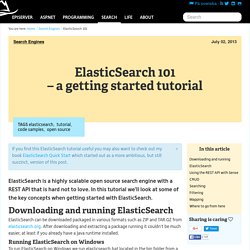 In this tutorial we'll look at some of the key concepts when getting started with ElasticSearch. Downloading and running ElasticSearch ElasticSearch can be downloaded packaged in various formats such as ZIP and TAR.GZ from elasticsearch.org. After downloading and extracting a package running it couldn't be much easier, at least if you already have a Java runtime installed. How to install Logstash with Kibana interface on RHEL. Packetbeat - Installing Packetbeat, Elasticsearch and Kibana tutorial. Note We now have Packetbeat Deploy, a project that automates the installation of all these components. 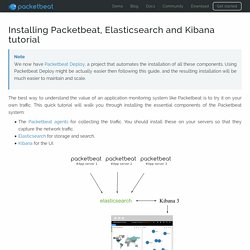 Using Packetbeat Deploy might be actually easier then following this guide, and the resulting installation will be much easier to maintain and scale. Elasticsearch. A few weeks ago my colleague Jettro wrote a blog post about an interesting real-life use case for Kibana: using it to graph meta-data of the photos you took. 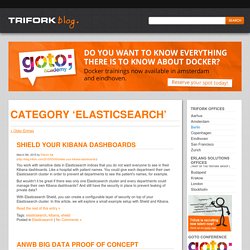 Given that photography is not a hobby of mine I decided to find a use-case for Kibana using something closer to my heart: gaming. This Christmas I treated myself to a new computer. The toughest decision I had to make was regarding the video card. In the end I went with a reference AMD R9 290, notoriously known for its noisiness. Because I'm really interested in seeing how the card performs while gaming, I decided to spent some time on my other hobby, programming, in order to come up with a video card monitoring solution based on logstash, elasticsearch & Kibana. Using Kibana for Business Intelligence. Introduction Elasticsearch is by far the best and most awesome search engine out there today, and its adoption rate is unparalleled in the world of search engines. 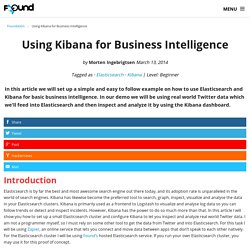 Kibana has likewise become the preferred tool to search, graph, inspect, visualize and analyse the data in your Elasticsearch clusters. Kibana is primarily used as a frontend to Logstash to visualize and analyse log data so you can follow trends or detect and inspect incidents. However, Kibana has the power to do so much more than that. NLPchina/elasticsearch-sql. ElasticSearch 101 - A getting started tutorial. ElasticSearch Tutorial - Questions - Basics - Part I. 2) Relational databases maps the values of fields in a table to indexes. 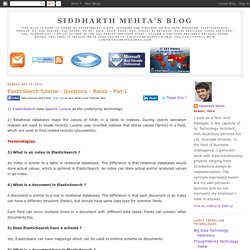 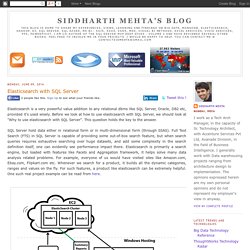 Before we look at how to use elasticsearch with SQL Server, we should look at "Why to use elasticsearch with SQL Server". This question holds the key to the answer. SQL Server hold data either in relational form or in multi-dimensional form (through SSAS). Full Text Search (FTS) in SQL Server is capable of providing some out-of-box search feature, but when search queries requires exhaustive searching over huge datasets, and add some complexity in the search definition itself, one can evidently see performance impact there.

Elasticsearch is primarily a search engine, but loaded with features like Facets and Aggregation framework, it helps solve many data analysis related problems. Multi Match Query. The multi_match query builds on the match query to allow multi-field queries: { "multi_match" : { "query": "this is a test", "fields": [ "subject", "message" ] fields and per-field boostingedit Fields can be specified with wildcards, eg: { "multi_match" : { "query": "Will Smith", "fields": [ "title", "*_name" ] Individual fields can be boosted with the caret (^) notation: 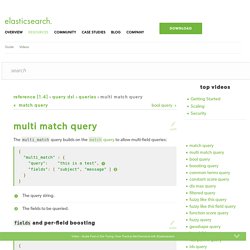 Query String Query. A query that uses a query parser in order to parse its content. 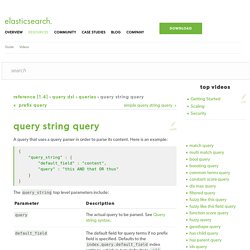 Here is an example: When a multi term query is being generated, one can control how it gets rewritten using the rewrite parameter. When not explicitly specifying the field to search on in the query string syntax, the index.query.default_field will be used to derive which field to search on. It defaults to _all field. So, if _all field is disabled, it might make sense to change it to set a different default field. Search NuggetsSearch Nuggets.

In this blog post we introduce a Vagrant box to easily create configurable and reproducible development environments for ELK (Elasticsearch, Logastash and Kibana). 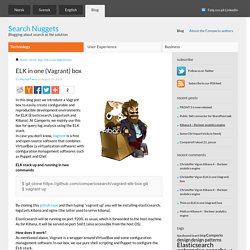 At Comperio, we mainly use this box for query log analysis using the ELK stack. In case you don’t know, Vagrant is a free and open-source software that combines VirtualBox (a virtualization software) with configuration management softwares such as Puppet and Chef. Kibana 4 - the beer analytics engine. Kibana 4 is a great tool for analyzing data. 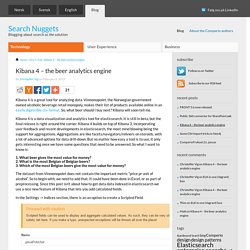 Vinmonopolet, the Norwegian government owned alcoholic beverage retail monopoly, makes their list of products available online in an easily digestible csv format. So, what beer should I buy next? Kibana will soon tell me. Kibana 4 is a data visualization and analytics tool for elasticsearch. It is still in beta, but the final release is right around the corner. 1. 2. 3. The dataset from Vinmonopolet does not contain the important metric “price pr unit of alcohol”. Elasticsearch: Indexing SQL databases. The easy way. Elasticsearch is a great search engine, flexible, fast and fun. Elastic Search 64-bit – SUSE Gallery. Prelert adds Elasticsearch connector to open up big data.

Big data analysis can open up valuable insights that are locked up in databases, but releasing that information without access to a team of data scientists isn't easy. Analytics company Prelert is aiming to make big data accessible and valuable for all businesses with its anomaly detection engine, built using unsupervised machine learning technology. No human intervention is required to set parameters or tell it what to look for, once it's pointed in the right direction it will go to work on massive volumes of streaming data. The latest stage of its development is today's release of a connector to allow deployment of the technology on Elasticsearch stacks.

Offering an Elasticsearch connector, opens up the use of machine learning technology, providing tools that make it easier to identify threats and opportunities hidden within massive data sets. ElasticSearch. In the beginning was Apache Lucene. Written in 1999, Lucene is an “information retrieval software library” built to index documents containing fields of text. This flexibility allows Lucene’s API to be independent of the file format. Almost everything can be indexed as long as its textual information can be extracted.

Formally Lucene is an inverted full-text index. The core elements of such an index are segments, documents, fields, and terms. Scaling is done by distributing indexes into multiple servers. ElasticSearch and SQL Server are sitting in a tree... Want to know how to integrate SQL Server and ElasticSearch? Read on. Motivation With modern NoSQL datastores on the rise, classical relational databases with their rigid data model get challenged every day. Nonetheless, they still own the market and therefore every developer needs to have solid skills in working with them in a reliable and performant way. While relational databases have lots of use cases, there are areas where different technologies are a much better fit. Quelques trucs et astuces utiles…