A. L. I. C. E. The Artificial Linguistic Internet Computer Entity. LIFE photo archive hosted by Google. Kid-mobile-tech.jpg (1000×4814) Richard Turere: A peace treaty ... with the lions. No robots in our homes, but many predictions about 2013 come true. Jerry Lockenour couldn't predict what lay ahead for him 25 years ago when he stashed the Los Angeles Times' Magazine on a cabinet shelf. 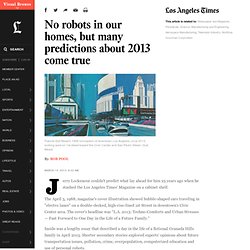 The April 3, 1988, magazine's cover illustration showed bubble-shaped cars traveling in "electro lanes" on a double-decked, high-rise-lined 1st Street in downtown's Civic Center area. The cover's headline was "L.A. 2013: Techno-Comforts and Urban Stresses — Fast Forward to One Day in the Life of a Future Family. " Inside was a lengthy essay that described a day in the life of a fictional Granada Hills family in April 2013. Shorter secondary stories explored experts' opinions about future transportation issues, pollution, crime, overpopulation, computerized education and use of personal robots. DOCUMENT: 1988 'L.A. 2013' essay At the time, Lockenour was a 43-year-old engineering director with Northrop Grumman Aerospace Systems in El Segundo. 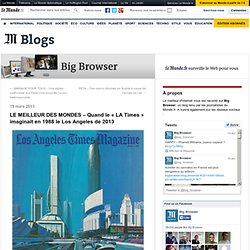 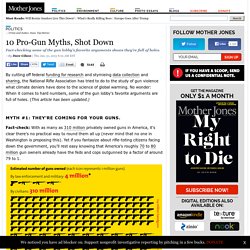 No wonder: When it comes to hard numbers, some of the gun lobby's favorite arguments are full of holes. (This article has been updated.) Myth #1: They're coming for your guns. Fact-check: With as many as 310 million privately owned guns in America, it's clear there's no practical way to round them all up (never mind that no one in Washington is proposing this). Yet if you fantasize about rifle-toting citizens facing down the government, you'll rest easy knowing that America's roughly 70 to 80 million gun owners already have the feds and cops outgunned by a factor of around 79 to 1. Sources: Congressional Research Service, Small Arms Survey Myth #2: Guns don't kill people—people kill people. Gun Control and Gun Rights Cartoons. Fahrenheit 451 Poster for Class. Fahrenheit 451 by Ray Bradbury - All The Covers. Aaron swartz | personal articles. The Science of Superheroes: Beyond "The Incredibles"

Sacrificing Science While Hollywood filmmakers today are striving to make their movies as scientifically realistic as possible, Weinberg believes the comic books from the so-called Silver Age of comics (the late 1950s and the 1960s) were more grounded in science than most of what is being published today. 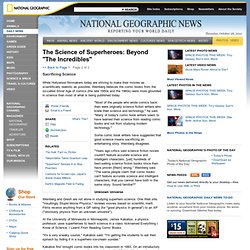 Weinberg disagrees. The science behind superheroes. Credit: Glenn Lumsden We’ve all heard it before: a scientist, working in a secret laboratory buried deep in the heart of an extinct volcano, suffers an unfortunate mishap and is doused in radioactive chemicals/gamma rays/mutagenic DNA. 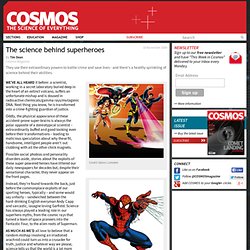 Next thing you know, he is transformed into a crime-fighting guardian of justice. Oddly, the physical appearance of these accident-prone super-brains is always the polar opposite of a stereotypical scientist – extraordinarily buffed and good looking even before their transformations – leading to malicious speculation about why these fit, handsome, intelligent people aren’t out clubbing with all the other chick magnets. Possible social phobias and personality disorders aside, stories about the exploits of these super-powered heroes have littered our daily newspapers for decades but, despite their sensational character, they never appear on the front pages.

But science was, for the most part, an unknown quantity for the common person. Enter now the superhero. GLOBAL WARMING PROJECT. SCIENCE FICTION PROJECT.