english BY camp - collection of games and activities for English camp 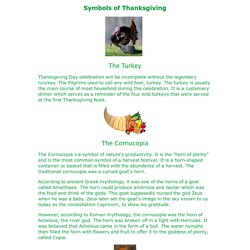 The Pilgrims used to call any wild fowl, turkey. The turkey is usually the main course of most household during this celebration. It is a customary dinner which serves as a reminder of the four wild turkeys that were served at the first Thanksgiving feast. The Cornucopia The Cornucopia s a symbol of nature's productivity. According to ancient Greek mythology, it was one of the horns of a goat called Amalthaea.

However, according to Roman mythology, the cornucopia was the horn of Achelous, the river god. The Pumpkin Another symbol of the modern Thanksgiving dinner is the pumpkin pie. Cranberries Cranberries are a kind of berry. Get some cranberry recipes here Beans. Angela : my typical Thanksgiving - Audio Lingua - mp3 in english, german, spanish and french. Kids Choose Turkey For Presidential Pardon. Thanksgiving Traditions: A Presidential Pardon. Origins Each year since 1947, the National Turkey Federation and the Poultry and Egg National Board have given a turkey to the President of the United States at a White House ceremony. 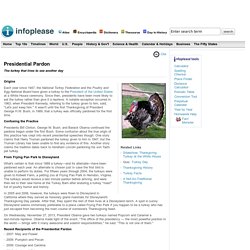 Since then, presidents have been more likely to eat the turkey rather than give it a reprieve. A notable exception occurred in 1963, when President Kennedy, referring to the turkey given to him, said, "Let's just keep him. " Obama pardons turkeys and tells dad jokes for Thanksgiving tradition – video. 8 Sounds Turkeys Make and What They Mean. Turkey hunting is very exciting in that we get to try our best to fool a smart old Tom by imitating another turkey. 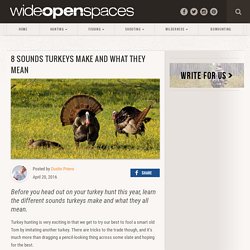 There are tricks to the trade though, and it’s much more than dragging a pencil-looking thing across some slate and hoping for the best. Turkeys make a range of sounds and each vocalization has a meaning behind it. Like turkeys, humans have sounds that we use in particular situations. In life, and in turkey hunting, if we were to use the wrong vocalization at the wrong time, it wouldn’t fit right with anyone in the area. You wouldn’t want to laugh during a funeral or sound angry when praising a child right? Below are the most common sounds turkeys make and what they all mean. 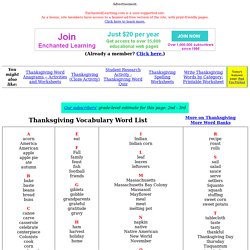 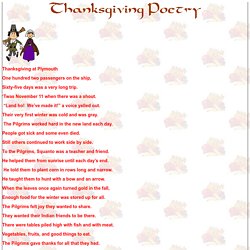 ‘Twas November 11 when there was a shout. “Land ho! We’ve made it!” Their very first winter was cold and was gray. The Pilgrims worked hard in the new land each day. People got sick and some even died. Still others continued to work side by side. To the Pilgrims, Squanto was a teacher and friend. He helped them from sunrise until each day’s end. He told them to plant corn in rows long and narrow. Preschool Express by Jean Warren. THANKSGIVING ROLE PLAY. Kids Teach Us How To Say Thank You. Kid President’s 25 Reasons To Be Thankful! 10 Ways to Say Thank You - Free English Lesson (ESL) 11 Beautiful Ways to Say Grace. Throughout history, people of all different cultures and religions have paused before a meal in order to express gratitude for the nourishment food provides. 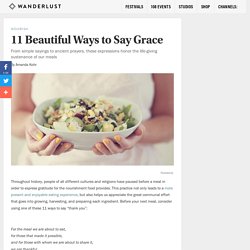 This practice not only leads to a more present and enjoyable eating experience, but also helps us appreciate the great communal effort that goes into growing, harvesting, and preparing each ingredient. Before your next meal, consider using one of these 11 ways to say “thank you”: For the meal we are about to eat,for those that made it possible,and for those with whom we are about to share it,we are thankful. – From the humanist benediction In this plate of food, I see the entire universe supporting my existence. – Zen blessing from Thich Nhat Hanh The food is brahma (creative energy). Blind Side - A Must See Thanksgiving Movie. Grateful.cards.quotes. Gratitude Jar Activity Table Decor. November 3rd, 2014 Another great upcycle mason jar craft that creates an elegant yet simple table decoration and activity for Thanksgiving. 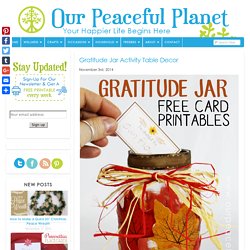 Download and print out the provided gratitude cards and the wonderful quote. Decorate your jar with the idea provided or with just some ribbon or raffia and set it on your table with some colored pencils. Encourage guests to write down unusual things they are grateful for and drop them in the jar. There’s various sizes of the quote for printing, hanging, framing or giving as handouts to your friends and family. NOTE: I show how to add paper leaves on the jar with Mod Podge. Book Of Thanks.