Step 3 of Phonics, CVC Short Vowel ( A ) New. 5 Minute English: Pronunciation. Pronunciation Lessons Intonation - Intonation is the rising and falling sounds of the voice when speaking. 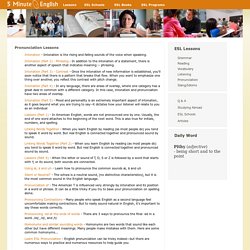 Intonation (Part 2) - Phrasing - In addition to the intonation of a statement, there is another aspect of speech that indicates meaning -- phrasing. Intonation (Part 3) - Contrast - Once the intonation of new information is established, you'll soon notice that there is a pattern that breaks that flow. When you want to emphasize one thing over another, you reflect this contrast with pitch change. Intonation (Part 4) - In any language, there are areas of overlap, where one category has a great deal in common with a different category. Ship or Sheep: Minimal pair ESL pronunciation practice. Fonetiks. Animated Phonetics Guide. Interactive Phonemic Chart. Forvo: the pronunciation guide. All the words in the world pronounced by native speakers.

It’s spoken in dozens of countries around the world, from the United States to a tiny island named Tristan da Cunha. It reflects the influences of centuries of international exchange, including conquest and colonization, from the Vikings through the 21st century. Here are 25 maps and charts that explain how English got started and evolved into the differently accented languages spoken today. The origins of English 1) Where English comes from English, like more than 400 other languages, is part of the Indo-European language family, sharing common roots not just with German and French but with Russian, Hindi, Punjabi, and Persian. 2) Where Indo-European languages are spoken in Europe today Saying that English is Indo-European, though, doesn’t really narrow it down much. 3) The Anglo-Saxon migration 4) The Danelaw The next source of English was Old Norse. 5)The Norman Conquest 6) The Great Vowel Shift.

British Accents and Dialects. Wikimedia The United Kingdom is perhaps the most dialect-obsessed country in the world. 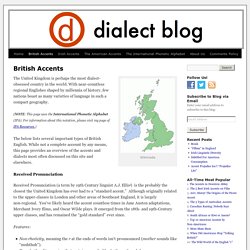 With near-countless regional Englishes shaped by millennia of history, few nations boast as many varieties of language in such a compact geography. (NOTE: This page uses the International Phonetic Alphabet (IPA). For information about this notation, please visit my page of IPA Resources.) The below lists several important types of British English. Received Pronunciation Received Pronunciation (a term by 19th Century linguist A.J. Features: Non-rhoticity, meaning the r at the ends of words isn’t prounounced (mother sounds like “muhthuh”).Trap-bath split, meaning that certain a words, like bath, can’t, and dance are pronounced with the broad-a in father. Speech Samples: Cockney.

BBC Learning English. TeachingEnglish. Pronunciation Learning Cards for Teachers and Students of English Language Pronunciation. Click on images to enlarge Here is some feedback from students, trainee EFL/ESL teachers and teacher trainers on the cards: "Thanks for your cards! 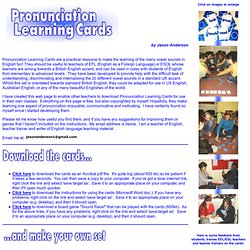 They are really good! " Laura (Teacher trainer, Uruguay) "I've started using the pronunciation cards with one of my elementary classes and both the students and I were positively thrilled! Francesca (Teacher, Italy) "Jason's got a terrific imagination , I could never have thought of all those awesome activities" Diego (Trainee teacher) "Please ask Jason whether he has any more games to recommend!