Susie Dent's Modern Tribes: Brits have perfected a secret version of the English language to use with their co-workers — Quartz. British English has many distinctive hallmarks: a plethora of “u”s borrowed from old French, a use of “s”s where “z”s are used in American English (realise, instead of realize), colo(u)rful idioms, and a rich history of slang. 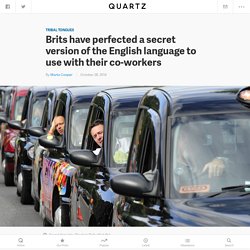 For lexicographer, writer, and broadcaster Susie Dent, British English is also “littered with tribal footprints,” as she explains her new book, Dent’s Modern Tribes: The Secret Languages of Britain. In the book, Dent gathered and chronicled the unique words and phrases used among specific professions and interest groups in the UK, terms she acquired through hundreds of interviews and, in her words, “eavesdropping.”

“Every sport, every profession, every group united by a single passion draws on a lexicon that is uniquely theirs, and theirs for a reason,” she writes. The language we use among select peers is, fundamentally, about our identity and the tribe we belong to. Future - The secret “anti-languages” you’re not supposed to know. Could you erectify a luxurimole flackoblots? 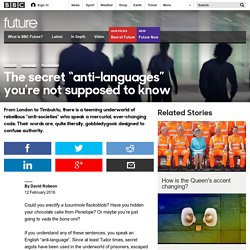 Have you hidden your chocolate cake from Penelope? Or maybe you’re just going to vada the bona omi? Dictionary of English slang and colloquialisms of the UK. The Online Slang Dictionary. Slang: the changing face of cool. Slang has always fascinated me. 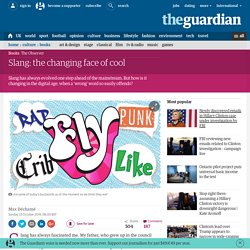 My father, who grew up in the council estates of Slough during the second world war, knew slang words for most situations, good and bad, which I would hear regularly around the house as a child. Somewhere in my early 20s, I stumbled across a cheap secondhand reprint of a book by an 18th-century Londoner named Francis Grose, which recorded the everyday speech of the people he encountered in the low drinking dens, bagnios and rookeries around Covent Garden and St Giles. First published in 1785, A Classical Dictionary of the Vulgar Tongue remains for me the single most important slang collection of them all. A call to arms: let's get rid of all the jargon! In this high-tech, gee-whiz world, more and more people seem to speak in jargon or, as I like to call it, gibberish. 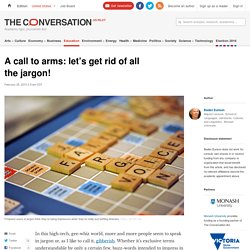 Whether it’s exclusive terms understandable by only a certain few, buzz-words intended to impress in meetings, or euphemisms to make something seem better than it is, the use of jargon really does little more than confuse the listener. Jargon tends to go through three stages: Jargon starts out as a simple technical sublanguage: users devise abbreviations and acronyms that help speed up processes. It also helps reinforce group solidarity in that it becomes a semi-private language, but with clarity its main aim.Jargon can go over to the dark side when it is so dense that “outsiders” have difficulty understanding it. Euphemisms and deception may creep into the discourse of the in-crowd’s private language. Do people understand jargon? Unfortunately, anti-language like Orwell’s parody is heard in offices and boardrooms every day almost 70 years after he put typewriter to paper. Language and occupation flashcards. Language and occupation. Introduction This guide is written for students who are following GCE Advanced level (AS and A2) syllabuses in English Language. 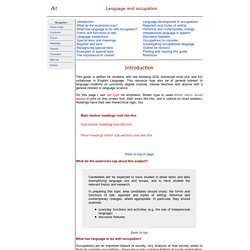 This resource may also be of general interest to language students on university degree courses, trainee teachers and anyone with a general interest in language science. On this page I use red type for emphasis. Brown type is used where italics would appear in print (in this screen font, italic looks like this, and is unkind on most readers). Headings have their own hierarchical logic, too: Back to top of page What do the examiners say about this subject? Back to top What has language to do with occupation? Occupations are an important feature of society. Care home in Yorkshire told not to call residents 'love' as it is 'patronising' 'When you are living in a home away from your family I think it is positive at times to be called a term of endearment if it is something they are comfortable with...' - Stephanie Kirkman Meikle It follows controversy in last year over an online tutorial for volunteers recruited to welcome visitors to the Yorkshire legs of the Tour de France which advised against the use local greetings such as love or darling in case visitors were offended. 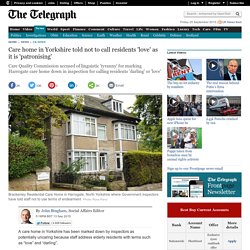 Sir Michael Parkinson, the chat show host, and the cricketing umpire Dickie Bird, were among prominent Yorkshiremen to denounce that decision “daft”. But the use of affectionate terms such as “dear” and “chuck” in care homes was highlighted as an area of concern in the report of the Commission on Dignity In Care, a major review into the sector published in 2012. The commission concluded that patronising older people should be viewed as a form of abuse but emphasised that if people wished to be called dear or chuck they should be. Antarctic Slang and jargon. 14 words you understand only if you work for Google. Paul Baker - What is polari? Free guides. Discourse Community. Discourse Community by: Yaisah Granillo As my discourse communities I chose the most common ones for me which are facebook, school, and my home because they are part of my everyday life. 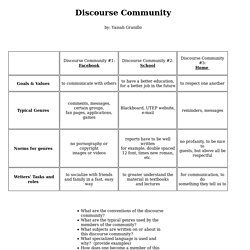 Facebook is a social networking website and its main goal is for a fast and easy communication with friends and family. When I need to ask for example my brother a question about anything I just write on his wall on facebook since he lives quite far from El Paso, I don't see him often. Also, if you want to see interesting videos, gossip or anything similar, facebook has it all.

School is a very important part of my life because the goals and values are to get a better education so that in the future I can get the professional job that I desire. Finally, the last discourse community that I chose is my home. Linguistics Research Digest: Search results for community of practice. Speaker A: This is the electric company. 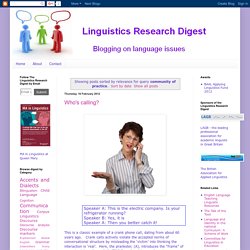