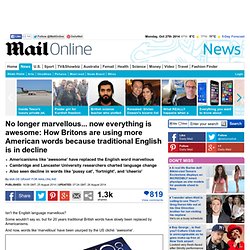 Some wouldn't say so, but for 20 years traditional British words have slowly been replaced by Americanisms. And now, words like 'marvellous' have been usurped by the US cliché: 'awesome'. Not keeping to the book? The gradual change, charted by researchers at Cambridge University and Lancaster University, has also seen the decline of 'cheerio', 'pussy cat', 'marmalade' and 'fortnight', which are now barely used by anglophones. While in the 1990s we were captivated by 'Walkmans', today it has been replaced by the likes of 'online' and 'smartphone'. It is an ambitious project. Fortnight. Poll. Pussy cat. Cheerio. Essentially. Treadmill. Should the Americanisation (or Americanization) of English worry us? “That’s what this nation has been built on, proud men. 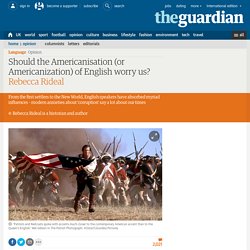 Proud fucking warriors!” Shouts Combo in one of the most well-known scenes from This Is England. What Combo would have thought of the recent report that the language of his beloved nation was becoming increasingly Americanised we can only imagine. But very few things have engendered as much debate as the language we speak – from Jonathan Swift’s concerns in 1712 that English would fall from use like Latin, and Samuel Johnson’s attempt in the mid-18th century to “preserve the purity” of the English language, to fresh claims that the “state of innocence” in which British English once existed has been “corrupted” by Americanisms.

Perhaps we need to ask two questions: 1) What do modern anxieties about the English language say about us? Is American Ruining the English Language? (I) Opinion By Farooq Kperogi I have written several articles on this page regarding the notion that American English is a corrupt version of British English. 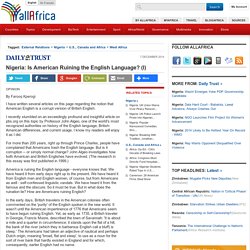 I recently stumbled on an exceedingly profound and insightful article on pbs.org on this topic by Professor John Algeo, one of the world's most recognized authorities on history of the English language, British-American differences, and current usage. I know my readers will enjoy it as I did. For more than 200 years, right up through Prince Charles, people have complained that Americans trash the English language. America is ruining the English language - everyone knows that. Ill-gotten gains – why Americanisms are a boon for the British. Do you hate Americanisms? 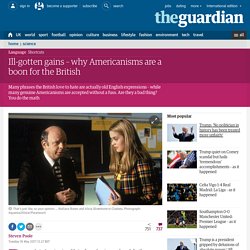 Lots of people wince and reach for the green ink if they hear a British person speak of death as “passing”. Yet that euphemism is present in Chaucer and Shakespeare. What about “oftentimes”? KammAmericanisms. A word on the words: The mystery of text speak, and a recipe for world peace - a Word on the Words / Funday Post / That's Life / The Sunday Post. One of the great mysteries of the British education system is what it now teaches its pupils during the lessons that used to be devoted to the English language. 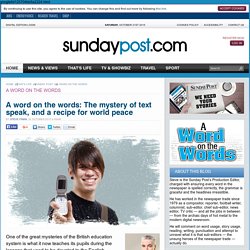 It might be advanced “spitting on the street and dropping litter” (a discipline in which schoolchildren I see at lunchtimes appear to be expert). But, whatever it is, it’s not English. With the rise of electronic social interaction using platforms such as Facebook, Twitter, Snapchat and texting on mobile phones, you might have thought there was a chance that standards of written English would have improved.

After all, if you are typing out comments, questions and gossip, you want to get your meaning across correctly. You wouldn’t want to leave your reader, or readers, wondering exactly what it is you think of Kylie-Trixiebell from down the street, her boyfriend La—A (pronounced Ladasha) and her new facial tattoo. So this was a chance for the language to take a great leap forward. Or, at least, that would be my theory. That’s the Way It Crumbles: The American Conquest of English by Matthew Engel – review.

I worked for a few years in my 20s at the literary quarterly Granta. 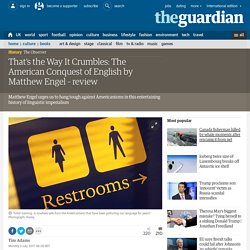 The magazine had been a very English institution, based in Cambridge, until it was successfully hijacked by a bullish and bearded American graduate student, Bill Buford, who had arrived at the university via Louisiana and California to help edit Shakespeare, and was looking for an excuse to stay on. I became his deputy. As a former linebacker in American college football, Buford was not always the easiest man to argue with, but when it came to questions of written style the British contingent in the office attempted to mount occasional rearguard actions. Mostly, we followed English linguistic conventions and spelling in the magazine, but on a few issues Buford was entirely intransigent. One of these, our Rorke’s Drift, was the word “aeroplane”. That story begins in 1533.