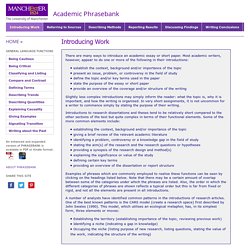 Most academic writers, however, appear to do one or more of the following in their introductions: establish the context, background and/or importance of the topicindicate an issue, problem, or controversy in the field of studydefine the topic or key termsstate the purpose of the essay/writingprovide an overview of the coverage and/or structure of the writing In very short assignments, it is not uncommon for a writer to commence simply by stating the purpose of their writing. Introductions to research dissertations tend to be relatively short but quite complex in terms of their functional elements.

Some of the more common elements include: