Guild Wars 2 Engineer PvP Damage Build. This Guild Wars 2 guide is intended to be a quick resource for any Engineer, used as easy access to the latest effective and popular end-game weapon combinations and builds for PvE, sPvP, and WvW. 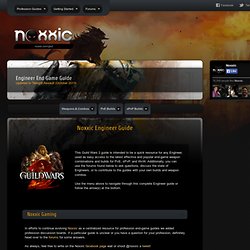 Additionally, you can use the forums found below to ask questions, discuss the state of Engineers, or to contribute to the guides with your own builds and weapon combos. WvW Engineer Build thread - Engineer. Running WvW Engineer Spec since i reach lvl 80. 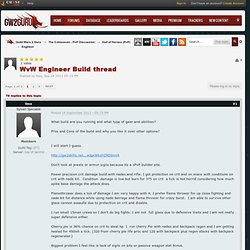 Build ill post it its purly for wvw and was made on experience during different fights in wvw. 30 explosives to get 1500 range on granades +1 extra grande, decres grande CD by 20% and burn on cryts ( 33%) 10 in fire arms for 1200 rifle range 10 in alchemy for aouto elixir S on 25% health 20 in tools for pure CRYT DMG BONUS + perma swfiftnes ( 5s evrytime you switch to kit - med or grande kit ) + 10% dmg while standing still or ... my personal choice LEG MODS Gearwise all 80lvl exotic Power/prec/cryt dmg + 6 scholar runes With this build you should have 89 cryt dmg and around 40% cryt chance.

Why no more points in firearms ? Granades great range awesome dmg when CRIT. Awesome cc ability insane range with granades ( its like walking arrow cart ) and dmg.( each granade apply 1 stac of vurnablility and you throw 3 at once) its great in 1v1 with crazy rifle crits and you got a perma swiftness. Guild Wars 2 Skills. Engineer: Pistols and Elixirs for Conditions and Boons - Guild Wars 2 Grandmaster. Teldo build. Well-o-mancer. The primary Necro role in zerg WvW encounters is damage and support via debuffs and condition conversions, mostly via Wells, and back line disruption via Plague form. 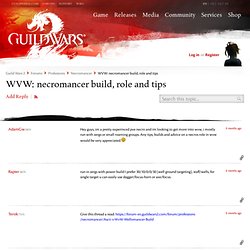 As such, Power builds tend to be better than Condi builds in large group engagements. I’ve been running a slight variation on Ascii’s build where I go 15 into SR instead of a full 25 in DM. Well-o-mancer Build. Necromancer Build Calculator. Yuuki's guide to create your own necro pvp build - Necromancer. Guild Wars 2 Necromancer PvP Damage Build. This Guild Wars 2 guide is intended to be a quick resource for any Necromancer, used as easy access to the latest effective and popular end-game weapon combinations and builds for PvE, sPvP, and WvW. 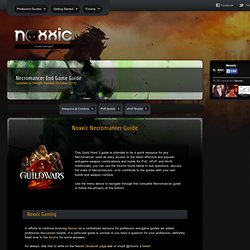 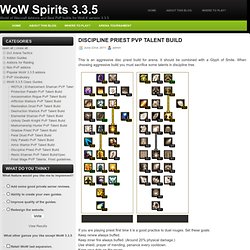 It should be combined with a Glyph of Smite. When choosing aggressive build you must sacrifice some talents in discipline tree. If you are playing priest first time it is a good practice to duel rouges. Set these goals: Keep renew always buffed. Keep inner fire always buffed. During few duels you will get used to your key bindings and cooldowns. Glyphs Major: Glyphs of inner fire, Glyph of Penance, Glyph of Pain Suppression/ Glyph of Smite Gems High priority stats for discipline priest are: Haste, Spell Power, Mana per 5 seconds (mp5) Your gems depend on your setup and arena braket. Arena tips 1) Mass dispel to enter the combat for avoiding sap. 2) Against another priest cast fear ward in the fight, when you come close to him or you see him moving to you to fear. Video Hydramist is a famous priest known all over the world. From your own site. 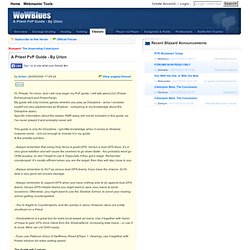 I'm Urion, and I will now begin my PvP guide. I will talk about 2v2 (Priest-Enhancement and Priest-Feral).My guide will only involve games wherein you play as Discipline - since I consider myself not very experienced as Shadow - comparing to my knowledge about the Discipline specc.Specific information about the classic RMP setup will not be included in this guide, as I've never played it and probably never will. This guide is only for Discipline, I got little knowledge when it comes to Shadow, however some – but not enough to include it in my guide.A few priestly pointers: - Always remember that using Holy Nova Is great DPS. Versus a dual DPS team, It’s a very good addition and will cause the enemies to go down faster. . - Always remember to DoT up versus dual DPS teams, if you have the chance. Shaman Elemental pvp. Guida allo shamano elemental PVP. Bindings: Eh si ragazzi, se non siete amanti dei Key Bindings allora il pvp non fa per voi. 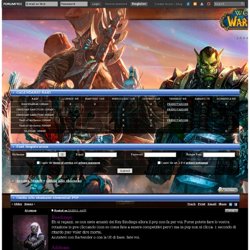 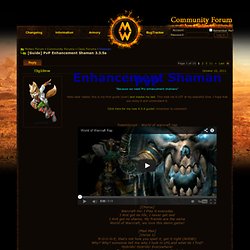 They dont have a rotation nor cast sequence, they just adapt to the circumstance. i will explain you how to pvp against many classes and how to counter X spell or ability. here we go! Basic things u will always do 1) Drop totems 2) Use Storm Strike whenever is off CD, if they are not casting a very dangerous spell. 3) Use Lava lash if SS is on CD. 4) If low health(-40%), use 5xmaelstrom to heal urself with healing wave or hex. 5)If good at health, use chain lightning or lightning bolt. 6)you have an spell called purge, use it.7)Use Spirit Walk as soon as u use wolves!!!!!!

Basically, pvp is simple. its always like this: u do X thing, i counter it with Y. i do Z thing, u defend with B. for example (yes, this is an example). PvP Stats for Enhancement Shamans. Pvp gear list. Hit and expertise caps. There was some interesting discussion in guild chat the other day (we have left our raiding guild and joined another more casual Singaporean guild since we weren’t doing much raiding anyway). 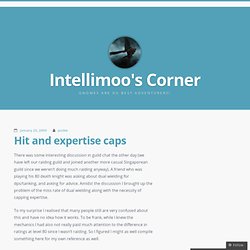 A friend who was playing his 80 death knight was asking about dual wielding for dps/tanking, and asking for advice. Amidst the discussion I brought up the problem of the miss rate of dual wielding along with the necessity of capping expertise. To my surprise I realised that many people still are very confused about this and have no idea how it works. To be frank, while I knew the mechanics I had also not really paid much attention to the difference in ratings at level 80 since I wasn’t raiding. Newgrounds. Armor Games.