"Moments of Being": Contemporary British Women Writers and the S

Representations of Feminism across cultural. 'Feminism is not finished' If you want to gauge the energy in the current British feminist movement, you have to speak to the young campaigners. 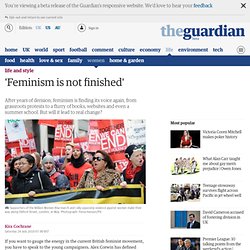 Alex Corwin has defined herself as a feminist since she started reading avidly about women's issues a few years ago, aged 19. It made her "SO ANGRY", she had to become an activist. Corwin joined a local grassroots group – Sheffield Fems– and since then she has taken part in campaigns that run the gamut: local, international, political, cultural. She could recently be found in a high-street newsagent, armed with Post-it notes to stick on the half-clad women in men's magazines, inscribed with the words "What if she was your daughter? " Once a month she and the group set up a stall in their local shopping centre, campaigning on issues including lesbian, gay, bisexual and transgender rights, and how climate change affects women worldwide.

The book ends with the results of an extensive survey. Kat Banyard agrees. The movement is well-represented across the country. How the 'new feminism' went wrong. Thanks to a string of celebrity sex stories, the world according to the tabloids has recently been – even more than usual – a sorry place for feminism. 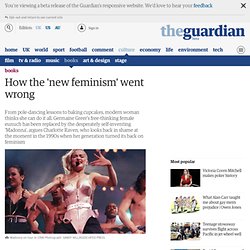 But among the countless snaps – of bikini-clad betrayed wives, distressed mistresses and pneumatic "hostesses" – perhaps the most disturbing was that of Katie Price's two-year-old daughter, Princess, in heavy makeup, complete with false eyelashes. Millions have seen it. The "debate" about it has been staged on all media platforms: on one TV talk show, a woman said she couldn't see what all the fuss was about.

Her daughter was a "girly girl", like Princess. She "adored" dressing up and posing in front of cameras. 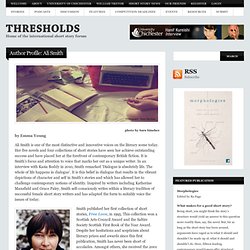 Her five novels and four collections of short stories have seen her achieve outstanding success and have placed her at the forefront of contemporary British fiction. It is Smith’s focus and attention to voice that marks her out as a unique writer. Smith published her first collection of short stories, Free Love, in 1995. As Smith’s writing career has progressed it has been her work in the novel form, rather than her short story collections, that has received the critical attention and acclaim, regardless of her continual production and championing of the short story.

Ambiguity is a theme that runs throughout all of Smith’s short story collections and it is arguably the characteristic that best defines her treatment of character and self. Rose Tremain: Short Story Collections. Michèle Roberts Short Story Collections. Michèle Roberts - Home. Memory Maps. Taking the P. Feminism is dead, along with Marxism, the British literary novel, history, family meals and God.

We're all post-feminists now. You can hear the sighs of relief all round. We don't have to be angry or sisterly or internationalist or socialist any more. Equality with men having been achieved, we can all ignore gender, which no longer matters when it comes to anything serious, and get on with trying to make money, being confident and charming, and not whingeing. Feminism, for many young women, is irrelevant, a movement dedicated to man-hating.

This is partly a problem of naming, of using simplistic either/or thinking. In a complex and fragmented culture like ours, which lacks one over-arching myth to unite us all (and perhaps those myths are dangerous anyway), we may still search for stories that can act like glue, sticking all the disparate bits of us together. Perhaps it is time to jiggle the Beowulf story around again.