American FactFinder - Results. Hcv0412st. Race, Race-Based Discrimination, and Health Outcomes Among African Americans. Search Results. Dokumentlevering - bibliotek.dk. Oliver, M.N ...African Americans die at a younger age and are sicker than Whites in the USA due to a number of diseases. 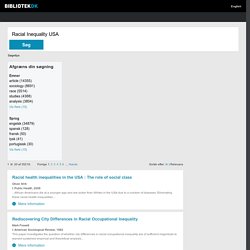 Eliminating these racial health inequalities ... Mere information Mindre information artikel. On Views of Race and Inequality, Blacks and Whites Are Worlds Apart. About four-in-ten blacks are doubtful that the U.S. will ever achieve racial equality Almost eight years after Barack Obama’s election as the nation’s first black president –an event that engendered a sense of optimism among many Americans about the future of race relations – a series of flashpoints around the U.S. has exposed deep racial divides and reignited a national conversation about race. 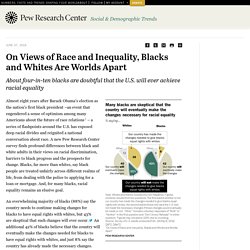 A new Pew Research Center survey finds profound differences between black and white adults in their views on racial discrimination, barriers to black progress and the prospects for change. Blacks, far more than whites, say black people are treated unfairly across different realms of life, from dealing with the police to applying for a loan or mortgage. And, for many blacks, racial equality remains an elusive goal. A much lower share of whites (53%) say the country still has work to do for blacks to achieve equal rights with whites, and only 11% express doubt that these changes will come.

Barack Obama’s Speech on Race. And yet words on a parchment would not be enough to deliver slaves from bondage, or provide men and women of every color and creed their full rights and obligations as citizens of the United States. 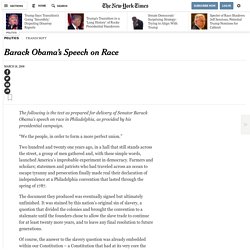 What would be needed were Americans in successive generations who were willing to do their part – through protests and struggle, on the streets and in the courts, through a civil war and civil disobedience and always at great risk - to narrow that gap between the promise of our ideals and the reality of their time. This was one of the tasks we set forth at the beginning of this campaign – to continue the long march of those who came before us, a march for a more just, more equal, more free, more caring and more prosperous America. This belief comes from my unyielding faith in the decency and generosity of the American people. But it also comes from my own American story. Martin Luther King: I have a dream. I am happy to join with you today in what will go down in history as the greatest demonstration for freedom in the history of our nation. 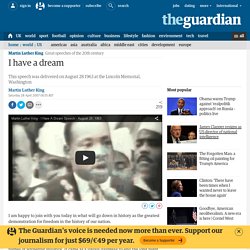 Five score years ago, a great American, in whose symbolic shadow we stand today, signed the Emancipation Proclamation. This momentous decree came as a great beacon-light of hope to millions of negro slaves, who had been seared in the flames of withering injustice. It came as a joyous daybreak to end the long night of their captivity. Equality of Opportunity.